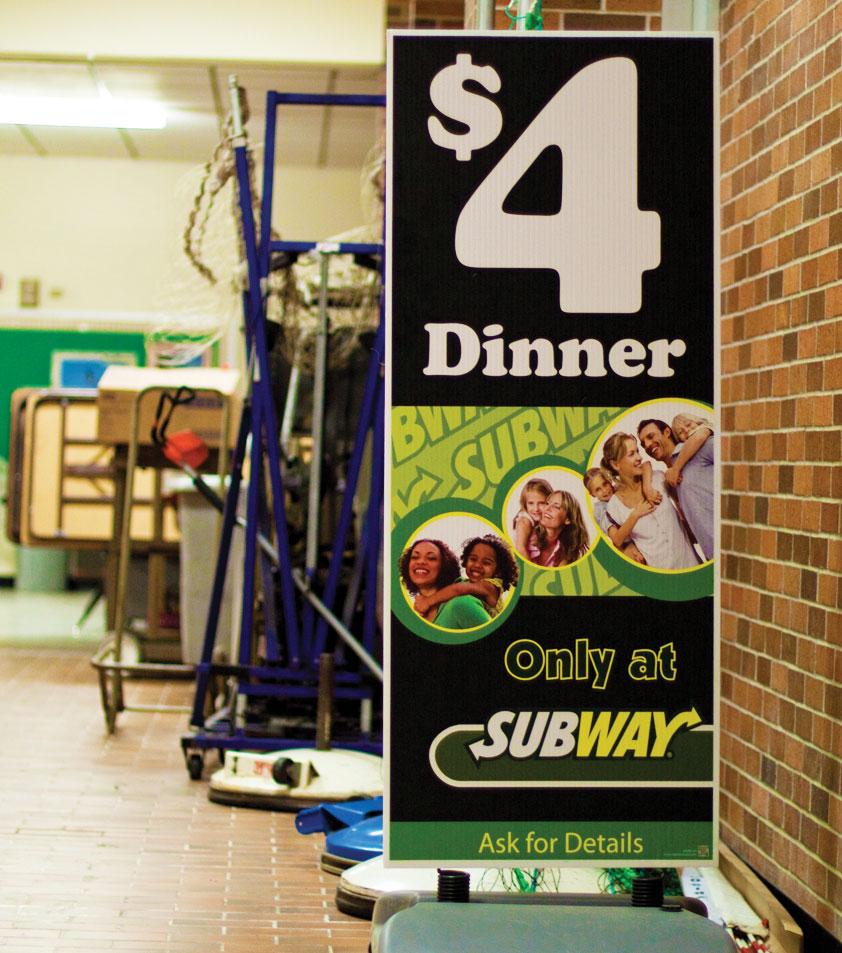 Deck the halls: Subway is one business partnership Kelly Sports Properties has connected to RBHS. The sign is before the gym. Photo by Muhammed Al-Rawi

Kelly Sports Properties may expand further into the fine arts program beginning next year by increasing business presence in the school’s performances and productions.

Athletic Director Jen Mast said commercials could potentially run before shows if KSP and CPS can come to an accord.

Additionally, Mast said adding flat screen televisions in the halls to broadcast KOMU news and commercials are options KSP and the district are considering.

She said there may also be the possibility of placing a large, lighted sign with business logos in front of the school that would be visible to drivers from Providence Road.

“My number one thing is protecting music, [so the music program] needs to be able to have what they need,” Mast said. “So, I’m not bringing music [into the KSP partnership] until someone can guarantee that [the] music [department] is going to have the ‘X’ number of dollars they raised last year.”

Although the majority of KSP’s function this school year has been promoting Columbia Public Schools’ athletics programs, they have also provided business advertising for the RBHS music program’s concert booklets.

In years’ past, the choir department has sold event tickets, organized camps and run auctions that provided almost $20,000 for the show choir and band, choir director Mike Pierson said.

This year, KSP provided five pages of ads out of 70 in the booklet, which is distributed before fine arts public performances. These ads helped lower the printing costs for the program, Pierson said.

But he wonders if additional KSP advertising in the book would provide his music program with many extra benefits.

“I’ve seen a slight monetary gain with the printing costs [KSP has covered], but beyond that we haven’t seen any other monetary gain out of it,” Pierson said. “…That was my impression, that they could [get us advertising], but we wouldn’t get near the amount of financial gain out of it that we do now.”

KSP strategic consultant Dan Holt said the monetary gains KSP generates through either sports or other activity’s advertising helps alleviate the need for students and their family members in booster organizations to fundraise.

The contract between CPS and KSP, approved in June 2010, allows KSP full access to provide what Holt termed “partnerships with local businesses” to create media guides and programs, as well as audio and video for the “partners that have signed contractual agreements with Columbia Public Schools.”

Under the contract, KSP would connect these partners with CPS activities that fall under the jurisdiction of Missouri State High School Activities Association.

“The intent of CPS is to use the partnership monies to supplement funding to all MSHSAA sponsored activities within the school district, even down to the Middle School and Junior High level,” Holt said in an email interview. “For those programs that are not under the purview of MSHSAA but still under CPS that require guidance in fundraising efforts [such as PTSA groups and others], KSP will help provide guidance so that any contractual commitments that CPS has are not violated by their activities.”

TEDx forum to come to Mizzou