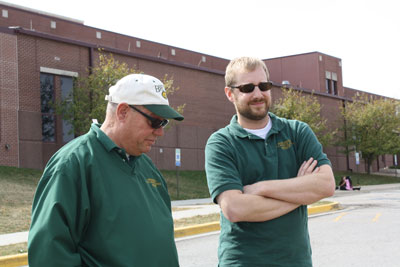 Columbia Public Schools selected seven candidates to fill the roles of leadership positions at Battle High School for the 2013 grand opening. The selection comes more than a year before the school doors let in students and includes two members of RBHS staff.

Robert Thalhuber, assistant band director at RBHS for six years, was selected to fill the role of acting band director for BHS. Thalhuber, RBHS alumni, has worked for RBHS since 2006 after reception of his master’s degree from the University of Missouri.

Justin Conyers, physical education teacher and assistant head football coach, was also selected by the committee to fulfill the role of head football coach for BHS. Conyers has continued a role in RBHS since his employment in 2004 after graduating from Westminister College.

Sophomores of this 2011-2012 school year will be the students affected by this change. In their senior year, students will lose teachers included in the new high school. Concert band member sophomore Heather Morris said she will miss Thalhuber’s presence in the band room.

“Music isn’t really going to be the same. It’s going to be different because he’s really hands on and if you don’t understand something he can tell you in more than one way,” Morris said. “For anybody who has trouble with that, it’s going to be harder for them. I was one of those people, so I’m going to miss him.”

Thalhuber is excited about the new role offered to him at BHS but said he holds RBHS in his heart as his home. Thalhuber, a graduate of RBHS, has been a Bruin for 10 years, including his school years. Thalhuber said RBHS has shaped his professional and adult life, making him the best he could possibly be.

“It is bittersweet; you know. I have a lot of acquaintances, friends and students I admire here, and that part was tough because it’s hard putting ourselves in a unfamiliar situations where you may not know everybody and where we are out of our comfort zones,” Thalhuber said. “On the other hand, it is something professionally I need to step up and do, but I am excited to be able to create from scratch as opposed to inheriting another position; it has some perks to it that are fun.”

Thalhuber said he felt ready with the task at hand because of his learning experience at RBHS. For the next year, both Conyers and Thalhuber will prepare to fill their leadership positions at BHS.

“I’m extremely happy about it. I’m very thankful. I’m excited to have the opportunity to be the first head football coach at Battle High School. You know; I’ve always wanted to be a head coach, and you know I’m from Columbia, and just to be able to be a head coach in the town I grew up in and where I’m from means the world to me,” Conyers said. “[I’m] extremely excited about the process, and, you know, I’ll still be here next year, so I got a little ways before I really get to take over the reigns there and get everything started, but it’s exciting.”

Parker is a former BearingNews online editor 2011-2012 and graduate of Rock Bridge High School. Newspaper made up a large part of his senior year, but at the moment he is aspiring to be a preacher.