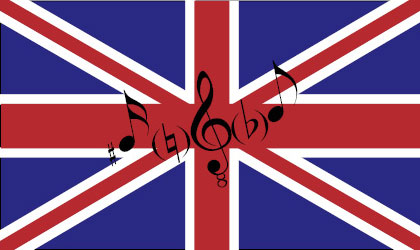 As she stood, singing along to the songs sung by the U.K. boy band One Direction, junior Whitney Cravens felt that her night was made when Harry Styles, one of the singers, waved at her. The moment was the best experience she’d had since becoming a fan.

The pandemonium surrounding artists originating from the U.K. has recently exploded, restarting from when the Beatles era ended. Teen music fans throughout the world have found their favorite genre of music in U.K. musicians. These popular artists include One Direction, Cher Lloyd, Adele, The Wanted, Ed Sheeran, Jessie J and others. These artists’ music is able to change the dynamics of what we listen to in the US.

“We want something different than the same old music that we hear on the radio. Artists like Adele bring a unique ‘flava’ to our culture,” pop culture teacher Denise Winslow said. “It is also trendy to be different and find music from artists that are new.”

A second British invasion seems to have arrived. One Direction made history with their first album, Up All Night, debuting number one on the Billboard Hot 200 chart. The Wanted charges 100 pounds a year ($159.47 USD) to be in their official fan club. Many artists, including One Direction and Taio Cruz, were featured in the Olympics 2012 closing ceremony, which only boosted their fame.

Because of the extreme popularity of U.K. artists, U.S. artists have lost attention from fans. The music in America is mostly about sex, money or girls, as heard in Usher’s song “Scream“, with lyrics stating, “Got no drink in my hand, but I’m wasted. Gettin’ drunk off the thought of you naked.”

Musicians from the other side of the pond, on the other hand, sing about something with a deeper meaning. Lyrics like, “see, I could do without a tan on my left hand, where my fourth finger meets my knuckle,” in “Wake Me Up” by Ed Sheeran is an example of emotional words involved in most U.K. artists’ music. Fans can connect with the musician because their music says something important. This allows for fans to identify with and enjoy every song the artists put out.

“Adele’s music makes me feel empowered. Like there’s nothing in the world I couldn’t do. The way she sings about love and loss shows me how to cope with it all, because she embraces life. Including the high and the low points,” junior Sarah Poor said. “I think her music speaks to many people in this way. Her songs show that everyone goes through depressing times, but it’s those times that make the good moments even better. And that being comfortable with your life is the best way to be happy.”

Part of this extreme emotion comes from the start U.K. artists have in the music industry. Adele, a singer from a young age, recorded some songs and when they found their way to Myspace, she gained a contract with XL Recordings. Her debut album, 19, made its way to the top of the charts in the U.K. and then became popular in the U.S. In 2009, she won two Grammys, one being Best New Artist. Her most recent album, 21 came out in 2011. Adele’s soul style of music allows for her fans to realize her musical ability and emotions she puts in music.

“I love Adele because she’s a truly talented artist,” Poor said. “She writes her own songs and has a naturally beautiful voice. She also comes from a very humble background. She never had any of this popularity until her first songs came out, which is why I consider her such a success … Her story is inspiring.”

One Direction, on the other hand, started by auditioning separately for The X Factor in 2010. When they were about to be sent home, the judges decided to put them together, forming a boy band. They eventually came out in third place, but that didn’t stop their success. Signing with Sony/Syco Music, they created  Up All Night,  selling more than a million copies worldwide. Their fame is still rising, and their fans (aka “Directioners”) keep them steady and supported. Fans see the boys as both talented and good looking.

“One Direction is obviously really hot, and they’re really relatable, and they’re young, close to my age,” Cravens said. “So they’re fun to watch, and they’re hilarious and pretty much very attractive.”

Similarly, Cher Lloyd started her popularity by auditioning for the X Factor in 2010 and finishing in fourth place. Although she got fourth, her originality and style interested people and allowed for her to get a music contract and start creating her album. Her new single, “Want U Back“, peaked at number 12 on the Billboard’s Hot 100. Cher Lloyd continues to gain popularity and fans, whom she calls her ‘Brats’. Her fans notice her great success and achievements since her beginnings.

Cher Lloyd’s “not afraid to be different,” junior Nina Johnston said. “Sure, she could be that sweet innocent girl that families love, but no. At 16, she got up on stage and proved she had an edge. She showed everyone no matter how old you are, you can always be the real you.”

The musicians’ popularity growth does have a big impact on fans. A lot of fans left once these U.K. artists weren’t their ‘little secret’ anymore. But even if their fame gets to extreme levels, most fans say they are in for the long run. They want to keep supporting these artists and make sure they are able to live their dreams.

“I don’t think I’ll ever stop being a fan. I may not like a few of her songs if she changed her style,” Poor said of Adele. “But overall I think she’s fantastic no matter what.”

These artists have an amazing effect on their fans. They can inspire and encourage without even being on the same continent, make a difference and raise the spirits of their fans with their music. They are able to change someone’s life with their lyrics, allowing for their emotions to emerge through their music and letting fans feel these emotions.

“When Adele won her first Grammy and lost all that weight, [it] was a huge moment for her and everyone,” Poor said, “so inspiring.”

Thanks again for writing this, Alyssa. You worked really hard on this and it’s a great way to show people how awesome Brit music is 🙂