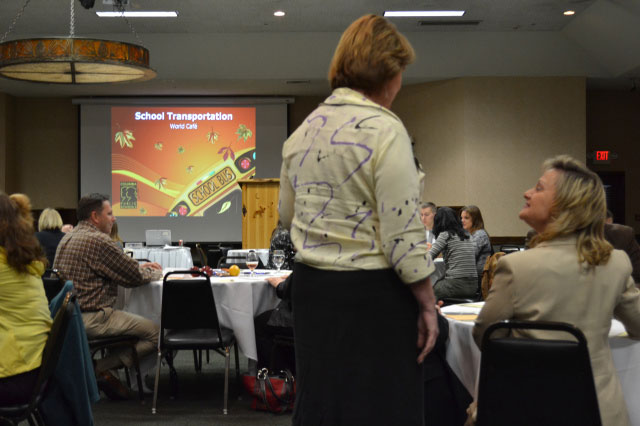 Teachers, parents, district administrators and students arrive at the Stony Creek Inn for the World Cafe. Those who attended watched a PowerPoint, presented by superintendent Dr. Chris Belcher, on the reasons to change existing times and policies. Photo by Atreyo Ghosh

School start times and transportation were the subject of  a community discussion at the Stony Creek Inn from 6:30 p.m. to 8:30 p.m.Sleeping in an extra hour could be in store for high school students next year.

The Columbia Public School district hosted the event and sent out 800 invitations and called people to encourage participation.

Parents, teachers, district administrators and students of various grades attended and discussed the issues. Columbia Public Schools community relations director Michelle Baumstark primarily led the discussion and followed the style of what the district calls a world-café: a chance for the community to have a conversation across the room about the issues.

District Superintendent Dr. Chris Belcher started the evening by explaining the need for a change in transportation and school start times within the district. Because of the opening of Battle High School, the grade reorganization and growth in student enrollment, the district needed a more cost-efficient method of transportation, he said.

“The school district is in a huge transition period right now. We’ve seen tremendous growth,” Baumstark said. “…We can’t continue to be efficient with a two-tiered system. We need to look at some other options.”

District personnel proposed a three-tier system; buses would pick up one group of students, drop them off and then pick up another group and so on for three total trips. This would cut transportation costs and lead to changing starting times for the different schools, Baumstark said.

Buses would drop off students 20 minutes before school began; however, some bus routes might change. Ideally, she said, no level of school would share buses with another level, such as how some students at RBHS share buses with Gentry Middle School students and all of a level’s buses would also be in the same tier.

District officials acknowledged if schools started later, after-school activities would have to start later as well, which could be troublesome for sports.

Still, they cited research on the biological clock of adolescents, and how it tends for teenagers to go to bed later and wake up later. The article, “Do Schools Start Too Early?” by Finley Edwards was available on the tables for guests to refer to.

Still, Belcher said the district wanted to consider parent schedules and preferences in their final decision, along with the diverse opinions of the entire community.

“The start times and the routines of families are very important to everyone,” Belcher said. “We go to work at a certain time; we get home at certain times, [and] we have kids that are certain ages. Everyone has a different story, and it’s important to listen to what best fits in general… [the change is] going to effect a lot of people, and we need to make sure that before the committee takes the next step [and] that we let them have a much broader view of feedback from the community.”

Belcher concluded by bringing up the logistics and costs associated with the situation, such as the state laws and schedule limitations, along with schools that had district-wide attendance and those in more rural areas. The cost and time-related constraints were on the tables for guests to look at during the activities Baumstark led.

After the initial talk, those in attendance divided into two groups and discussed either the proposed three-tier transportation system or school start times. A district employee sat at each table taking notes as the participants shared their ideas. Halfway through the meeting, the two sides switched, and people sat at new tables in an attempt to obtain diverse opinions.

“[The talk] really is an opportunity for our community to come in and give us feedback, input, ask questions [and] really have more in-depth conversations about the issues and the challenges that we face as a school district,” Baumstark said. “It helps us make more informed decisions, not only as a school district, but also for our board of education to make informed decisions.”

Those who attended expressed concerns about their children’s sleeping patterns, sports practice times, college start times and after-school jobs among other issues.

Kiersa Toll, parent of a fifth grader at Lee Elementary school and an eighth grader at Jefferson Junior High School said the district had a good idea by hosting the World Café discussions. Toll said this gave community members a chance to participate in the discussion.

“…They’ll actually be able to speak and be heard whereas in the past, some of the forums, they’ve tried to have… informational forums,” Toll said, “people don’t want to go to them because they feel like they’re just going to sit there and listen to a lecture for 45 minutes…”

The district will take public input into account while deliberating in December and January. The decision will be made in February 2013. Columbia Public Schools will implement the changes in the next school year.

What do you think? Which school level should start when? Tell us your thoughts in our comment section.

This is part of the Preparing for Battle ongoing special report. For more information on the changes occurring, check Bearing News biweekly for a transition update.