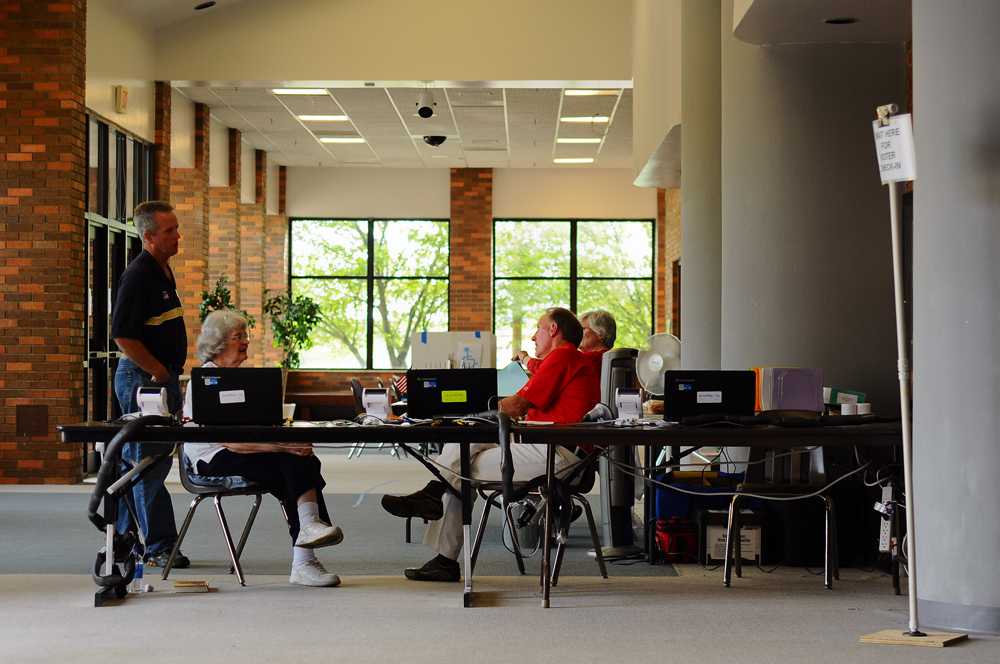 RBHS PAC serves as one of the city's voting areas. Photo by Muhammad Al-RAwi.

I have been waiting years for the moment when I would finally vote.

I used to go with my mom to the polls early in the morning and beg the lady at the desk to give me an “I Voted” sticker. I would stick it on my chest and pretend with all of my elementary school teachers that I had somehow snuck in. In middle school I stayed after class to make posters and pins for our mock elections. Even in junior high I religiously watched the news and read the paper. I wanted so terribly to turn 18.

My 16th birthday came and went and I didn’t get my drivers license — that didn’t excite me. My seventeenth birthday arrived, too, and although I could legally see R-rated movies, and was considered an adult in the wizarding world, I just wanted the next year to fly by.

Late this summer I turned 18. I registered to vote almost the same day. My excitement was uncontrollable. Every piece of confusing mail I received from the government added fuel to my fire.

But then this week came. Judgment week. The time when undecided voters, like myself, have to pick. And as I sat hunched over my too-yellow official sample ballot and my glowing computer screen I felt myself getting upset.

Local politicians weren’t too hard for me, although a few came down to some nitty gritty policies. But I got to the doozy, who to choose for President of the United States.

I sat, pencil poised to choose, scare tactic-ads playing on my computer, polls pulled up in another window, information that both parties had sent me laid out all over the kitchen table.

I got angry. I felt tears welling up and my fists clenching. This wasn’t what I had waited 18 years for. This couldn’t be. I wanted to be excited, to be overwhelmed by the sincerity of a speech, to think that one of the candidates could better the nation. I want to feel like the candidate that I fill in my oval for will make a difference. But I just didn’t believe it.

Voting used to seem so easy to me. Go into the p

I am worried. I am worried where the country – no, the world, –  will be in four years. Or ten years. Or fifty years. I am worried about the mounting debt crisis. I am saddened by the fact that many kids who spend their whole life trying to get out of overwhelming college debt. I am frustrated that wars are being fought on every front, often for the wrong reasons. I feel hopeless about supporting Medicare in the future. I feel wronged by social liberties being taken away. Natural resources are being depleted. Costs for a business to compete in today’s market are rising. Medical research is strapped for cash. Banks are closing. The world seems like such a scary and terrible place.

I feel a heavy burden. My vote is not the lighthearted gift I thought it would be but a heavy yoke of adulthood. I guess adulthood is like that, a grey world, none of the options are fantastic, but you’ve got to buckle down and make a judgment call.

I will never take voting lightly. My voice, even though it is only one in oh-so-many, holds weight.

It was hard for me to choose. And who knows, maybe tomorrow, in the booth, I’ll change my mind. Tomorrow, I won’t tell anyone who I voted for, but I will wear my badge of honor. Because to me that little sticker declares not just that I voted, but that I grew up. That I held back my childish enthusiasm, my naiveté, and swallowed that hard pill called government.

Maybe this wasn’t what I thought 18 years of life would look like, but I’m glad I made it.

This opinion piece is labeled as such on the desktop version.

I encourage all eligible voters to go and cast your votes. Also, if you haven’t registered yet, although you can’t vote today  you can in the future. Please register.

Style of the Week: Hanh Ngo

RBHS participates in last football game of the year

I love your voice Maria, as well as your message in this!

This is a great article, Maria. I love your writing style and how you have the ability to personalize everything. Good job 🙂