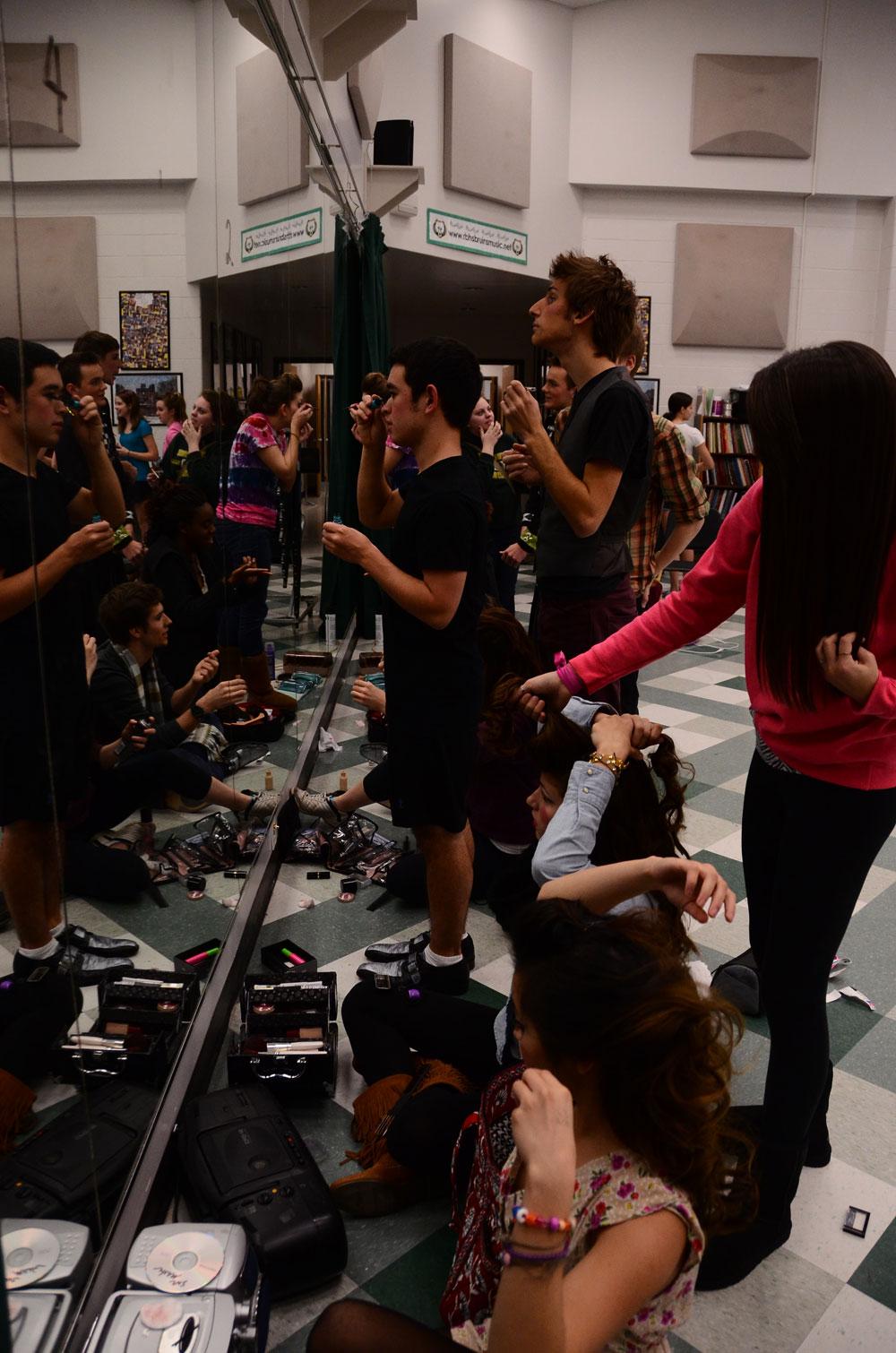 RBHS Show Choir prepares to run through their show the day before their premier performance. Both the Satin n' Lace and City Lights show choirs meet before school for their zero hour class, which begins at 7 a.m. every other day. Photo by Daphne Yu

After a survey conducted of CPS students, parents, teachers and other members of the Columbia community from December to January, the Ad Hoc Transportation Committee met Jan. 8 to draw up a proposal for changes in school start times. For a while, the general consensus was that the high school would have the middle slot.

The Transportation Committee repeatedly cited efficiency as the main reason behind the proposed change. The PowerPoint also included that with the current, two-tiered system, First Student and Columbia Public Schools [are] set up for failure. CPS Superintendent Dr. Chris Belcher summarized the proposal in a video statement sent to faculty today.

“The recommendation by the Transportation Committee is a three-tiered bus system to save money, and a piece of that is the fact that we’re adding a third high school,” RBHS principal Mark Maus said. “This is the proposal that they’re moving ahead with.”

But one of the main concerns for Maus is the existence of zero hour classes. RBHS choir director Mike Pierson, who teaches a zero hour class, said the proposed change to start times is not going to be well-received and is skeptical of its benefits.

“If either my wife or I have to take our boys to elementary school, then how are we going to get them if we both work?” Pierson said. “Are you telling me that they’re going to spend two hours or more at the elementary school before school even starts, or I’m going to pay for daycare for two hours in the morning?”

Pierson, director of the Satin ‘N Lace and City Lights show choirs, has children enrolled in elementary school for the 2013-2014 school year. Along with his personal concerns, he also is worried about how it will affect the show choir program.

“Show choir is early enough as it is right now [at 7 a.m.], and for us to start at 6:20 [a.m.] would be ridiculous,” Pierson said. “The kids right now barely function well at seven o’clock in the morning, much less even earlier.”

Senior Troy Guthrie, a member of the 2012-13 City Lights show choir, has similar concerns regarding the show choir, marching band and football strength training, all of which meet at 7 a.m. for a portion of the school year.

“I don’t know when it’s all going to get pushed back to,” Guthrie said. “Football has practice after school, and they don’t want to go for four hours. Show choir kids can’t go [after school] when the musical starts.”

“You’re going to get a lot of kids who won’t show up to class,” he said.

However, it’s not just attendance that is at risk with this proposal. Students also don’t like the idea of having to wake up earlier. By changing the current system and having high schools start 30 minutes before they already do, students must sacrifice sleep, an unpleasant price to pay.

“I just like sleep,” junior Megan Kelly said. “That’s my main thing. I like it the way that it is.”

Not only do most teens like sleeping in, but Pierson pointed to recent studies showing why sleep is important to teenagers. According to the National Sleep Foundation, teens need sleep to function well. Only 15 percent of teens get more than the recommended 8 and a half hours of sleep on weeknights.

“We’re a district that lends a lot of credence to research and tends to do a lot of research and makes decisions based on that,” Pierson said. “I think it’s ridiculous that this [decision] would be made right now seeing as we haven’t even considered the research. Or at least that’s how it looks.”

The CPS Board of Education will discuss the proposal at a meeting Monday, Jan. 14, which is open to the public. After soliciting public comment, the district will  host the final vote on the proposed changes  Feb. 11.

Do you think high schools should start earlier than they already do? How would earlier start times affect you?

This is part of the Preparing for Battle ongoing special report. For more information on the changes occurring, check Bearing News biweekly for a transition update.

[…] decision, Columbia Public Schools Superintendent Chris Belcher has officially taken a stance on the start times debate regarding what time primary and secondary schools will begin their school days next fall. In […]