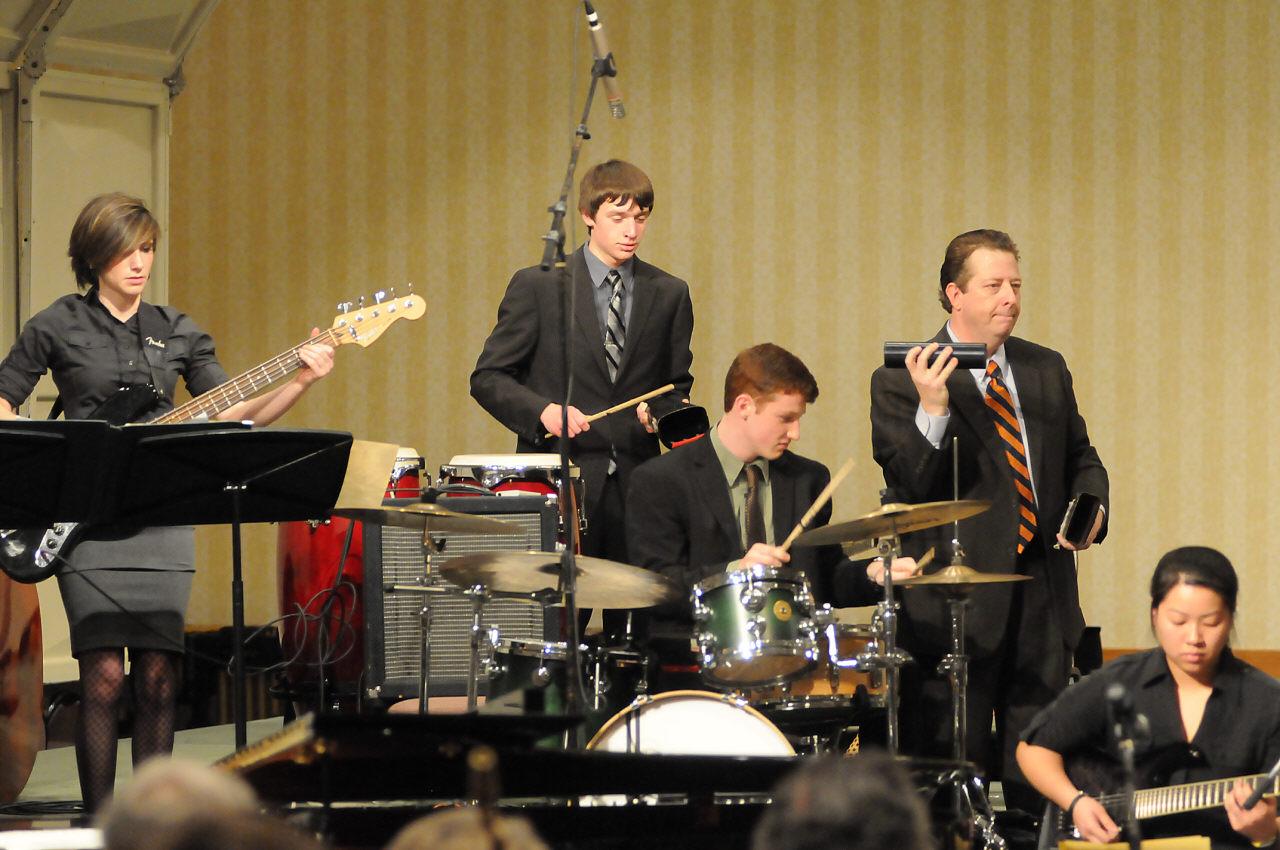 The RBHS jazz ensemble played at the Missouri Music Educators Association conference on Jan. 24 for a crowd of over 500 people. Photo used with permission from Ric Wilborn

Rather than sitting down to music stands and instruments during first hour Thursday morning, the RBHS jazz ensemble found themselves loading up a bus with equipment for their day-trip to the Tan-Tar-A Family Resort in Osage Beach, Mo.

Their task was to play a 25-minute concert for the 75th annual Missouri Music Educators Association conference (MMEA). Plopping down in the relatively comfortable seats of a coach bus at 8:15 a.m., the musicians embarked on their hour-long drive down to the resort where they would perform their set later that day.

This performance comes quickly after the jazz ensemble’s trip to Atlanta, Ga. three weeks ago, where they played at the Jazz Education Network’s four-day international conference. However, the differences between the atmospheres at JEN and MMEA were huge, senior alto saxophonist Kaleb Jacks said.

“JEN was much more prestigious, with the fact that it was an international conference,” Jacks said. “Jazz was everywhere throughout the hotel, constant performance. But MMEA is great because you get the opportunity to play and perform with great local musicians.”

MMEA invited the jazz ensemble to play after band director Steve Mathews submitted a recording of last year’s group. Because the conference only invites a select number of groups to perform, the jazz ensemble’s selection was an honor, he said. Not only did MMEA provide the group a chance to play for local members of the music world, but the attendance difference between the two conferences was large as well. In the end, the group received a standing ovation from more than 500 people.

Senior Clark Gribble, baritone saxophonist for the ensemble, said the size of the audience and energy felt throughout the room made the experience one well-worth remembering for him.

“I felt like it was a way bigger deal here than JEN was. There were way more people, and we were in our home state. People know our school here so we had to live up to our reputation,” Gribble said. “There were probably 500 to 600 people there today. … It was by far the biggest crowd I have ever played in front of and at the highest level of performing that I have ever done. It was just an unforgettable experience.”

RBHS jazz students also participated in groups other than the jazz ensemble. For example, senior Dalton Maggard auditioned for the All-State Jazz Band in December and made it into the band on vibraphone. While he played piano for the jazz ensemble’s performance, he also balanced rehearsals with the All State Jazz Band, gearing up to play this Saturday. By playing with students from schools around the state as well as RBHS, Maggard has been able to take hold of a great opportunity in his high school music career.

“When not playing, I’ve been hanging out with the rhythm section and horn players of the state jazz band,” Maggard said. “Because of the amount of time we spend rehearsing, the breaks are much needed and allow us to really get to know each other on an individual basis. … Being surrounded with musicians that are as good as and better than me is an amazing experience. The opportunity to perform for other musicians and at this level is great exposure.”

Whether in multiple bands or just one, the chance to represent the Bruin jazz program well was invaluable, and the jazz ensemble certainly lived up to the challenge. Overall, Jacks said, the MMEA convention allowed the musicians to gain important experience in a high-stress setting, where they were able to share their talent and love for music with citizens from around the state of Missouri.

“It’s been a joy to play and learn from musicians with such a similar appreciation for music,” Jacks said.

Have you seen the Jazz Ensemble perform? What is your favorite piece?