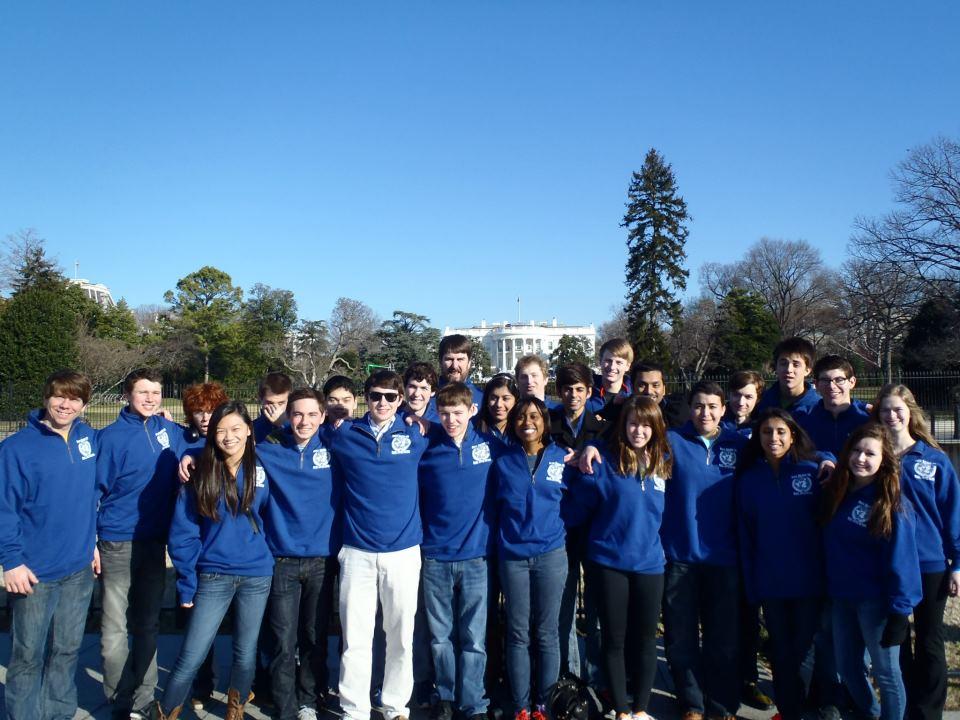 [dropcap style=”2″ size=”3″]O[/dropcap]Over the President’s Day weekend, RBHS’ Model United Nations team descended upon Washington D.C. aboard flying metal birds of flame screeching through the sky. Twenty-three students strong with four adult moderators along for the ride, they were excited, nervous, anticipating and dreading the event to come all in the same moment. The team has trained all year for this — it was their time to shine.

MUN is an international competition which, as its name suggests, engages students in a simulation of the United Nations. The competitors, called “delegates” for additional immersion and realism, are judged on a number of things: their ability to pass resolutions, how well they can schmooze for votes, public speaking, private communication and a host of other skills.

Various educational institutions host their own events; YMUN at Yale University, HNMUN at Harvard University, and the ILMUNC at the University of Pennsylvania are some of the more prominent ones. RBMUN attended the North American Invitational Model United Nations (NAIMUN), hosted by Georgetown University, which  involved nearly 3,000 high school students from many different countries.

By tradition, a keynote speaker and the secretary-general of NAIMUN open the conference. The speaker is usually a renowned member of an internationally important organization. This year was no different, as the conference featured David Kramer, president of Freedom House. Kramer started things off with a bang, however; his sharp criticisms of the Chinese government’s infractions on the civil liberties of the Chinese civilians caused quite a stir among the Chinese delegates. In fact, halfway through the speech, many of the Chinese teams walked out of the room. NAIMUN hastened to mend the rift, lessening the impact of Kramer’s comments.

“A heated speech started a weekend of stimulating international discourse,” NAIMUN’s representatives said on their website. “We respect all opinions but please note that keynote speeches are independent of NAIMUN views.”

As exciting as the opening speech was, the truly riveting portions of the competition were the committee meetings. RBMUN sent representatives to 17 different committees, ranging from the Roman Senate to the First Committee on Disarmament and Security to the World Health Organization. Though each organization possesses different roles on the world stage and therefore operates quite differently, Head Delegate senior Joe Pratt believes they taught integral life skills that can’t be found in any other club.

“I learned how to deal with different people, how to make alliances, how to write resolutions, that type of stuff,” Pratt said. “The thing about Model UN that you don’t really learn anywhere else is the social aspect of it. Having to work with others and coming together and compromising … that’s something that you just don’t get in another club like debate or Quiz Bowl.”

The social aspect of the conference is indeed one of the most important facets of the entire experience. Each delegate is thrown into a situation where they will only know their partner — some don’t even get that. Add in the fact that delegates come from all over the world, and one understands the true challenge is cooperating with fellow participants.

“Many of the Chinese kids in my committee had very different perspectives on a lot of our ideas than other students did,” Pratt said. “Talking to them and finding out their stance on these issues is really interesting, since they come from a different cultural background than we do.”

Principal Mark Maus emphasized those same interactions as one of the characteristics of the MUN program that makes it all worthwhile. To him, meeting with people whose paths one would never have crossed outside of MUN is an exciting learning experience.

“One of the best opportunities is to go and interact with people that you don’t get to,“ Maus said. “The opportunity to interact with these students, whether they’re Puerto Rican, Canadian, or from a private school on the West Coast … it’s something that can never be replicated.”

Though RBMUN has received awards for their performance at the conference in past years, this President’s Day weekend marked one of the team’s most successful performances to date, according to Pratt. Usually, only one or two members of the team are recognized. This year, NAIMUN recognized an unprecedented seven teams, ten members in all, for their work at the conference.

The jubilance of the awards ceremony was offset by the fact that this is the last RBMUN season for social studies teacher Dan Ware, co-head coach along with Latin teacher Jim Meyer. Ware will leave RBHS next year to teach in London, England, precluding his involvement with next season’s team.

“Since it’s Mr. Ware’s last year on the team, we wanted to make it a really memorable one. We wanted to make his last year his best one so he could really go out on top and enjoy it,” Pratt said. “I think we really did that. It was especially cool after we won the awards to see how proud of us he was.”

Though Ware’s absence might cramp the team’s style next year, there is no doubt in Maus’ mind that the RBMUN program will continue onward. The sponsor is just one part of the team, albeit a very critical one.

“Mr. Ware will certainly be missed, but I think any successful club, activity, or program is really done by a group of kids that are passionate about it,” Maus said. “It might be a learning experience, but we definitely have staff that will be able to handle it.”

Raj is a staff writer for Bearing News. He's tall, dark and unbelievably handsome. He enjoys tweeting at birds and consuming delicious foods. He's also probably the laziest man this side of the Mississippi. All in all, pretty awesome. Contact him at rsatpathy@bearingnews.org.