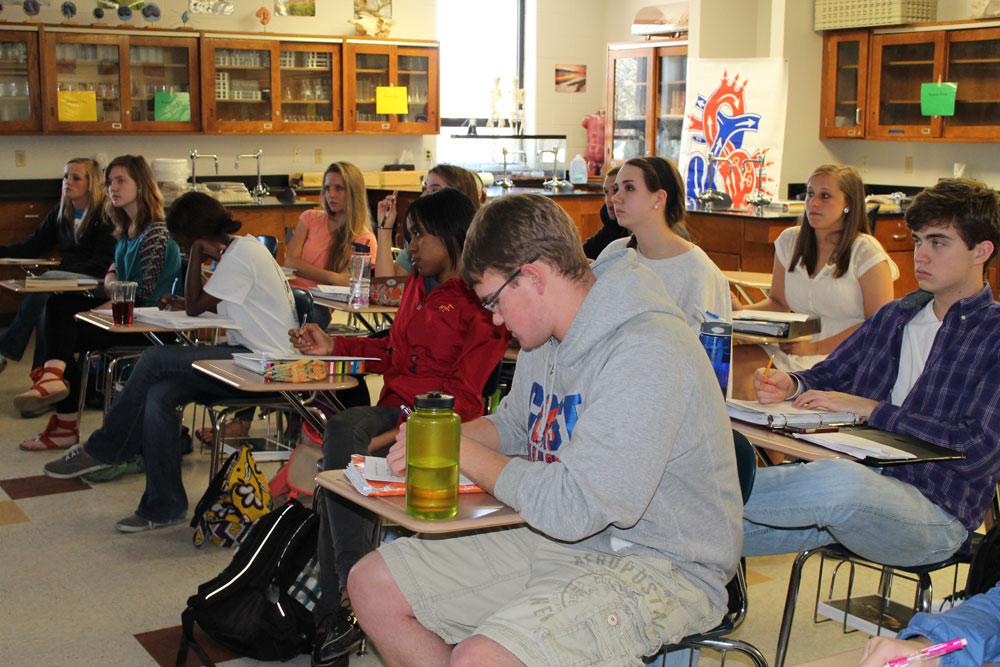 Missouri House Bill 136 could change graduation requirements on math and science credits. Students would have to take a math or science course for the two semesters prior to their graduation. Photo by Maddy Jones

Missouri graduation guidelines as to how to obtain the mandatory 24 credits became stricter with the introduction of requiring a half credit of personal finance in 2007. Now, high school students at RBHS and across the state might see another change.

Though students still to take a math and/or science class their senior year, state requirements only ask for three math and three science credits. This allows students who have met the requirements to omit these classes from their schedule senior year. Senior Carmel Shaka started out the year with Calculus AB as well as Anatomy and Physiology on her schedule, even though she had already met the math and science requirements. However, Shaka, who wants to study theater, dropped her Calculus class to focus on her personal priorities.

“This semester would have been a whole lot harder. … I concentrated a lot on getting prepared for different theatrical things, like I had the winter play to take care of, I had district competitions in my acting class [and] I also have work, so … taking that math that was really hard along with other classes … would have been a whole lot of stress on me that I had last semester,” Shaka said. “I couldn’t really handle that as much.”

While Shaka does think having a continuous math and science exposure could help students when it comes to those classes in college, she doesn’t think it’s necessary for the state to require those classes.

“It seems like a good amount of zpeople actually want to go into a career that requires either [math or science] so it’s not a problem of getting people to take those classes,” Shaka said. “I don’t think it would be fair to force other people to take them whenever they would want to take other classes in a profession that they’re going to go into.”

Honors Chemistry teacher Barry Still said his senior year of math and science exposure made his math and science classes his freshman year of college easier. However, Still, said taking on a schedule like his should be up to the students.

Junior class guidance counselor Leslie Kersha is OK with students not taking a science class senior year, but no matter which career path they are going down, Kersha said the guidance department tries to promote math classes. She said when students come in to finalize their course requests, they usually have already thought about their future path and know which classes fit on that path.

“We always recommend they take a math class for sure because almost every post-secondary endeavor does require math,” Kersha said, “and if you take a year off of math, it gets really hard to kind of get back into it because they lose a lot of skills they’ve developed.”

Although Advanced Placement Calculus BC teacher Burke McCray said math and science are important and beneficial skills to have in life, he understands it is not for everyone, and he supports the idea of fulfilling a certain number of credits to graduate.

“Well, I think it’s important, obviously, as a math teacher [to take] math and science … but I understand that not everyone has the same interest as I do,” McCray said. “I think the state should decide on how many credits a student needs to graduate and then make them get those credits and not necessarily take math and science their senior year if they already have taken care of those credits. They should be able to go on and take other classes that they are interested in.”

McCray said that taking a year off from a math or science course can not always be the best idea, yet it is still the student’s own decision.

“Taking the year off would affect a student because you would forget a lot of things, so that would be for the student to decide,” McCray said. “Some people take all the math they need by their junior year and won’t have to take it in college at all if they take a high enough level of math. But if you know you’re going to take a math class in college, you may want to take a senior year math class just so you don’t lose all of those skills, but in that case, I think it’s up to that student to decide individually.”

Junior Karina Kitchen knows she wants to pursue an art career versus a science and mathematical one. She was able to mesh together a schedule of classes she took interest in, she said, which will make for a more exciting school year.

“I haven’t decided exactly what I am going to major in, but I know for a fact that I don’t want to do anything in math and science,” Kitchen said. “And since I’m on the math track that is one year ahead, I’m finishing pre-calc now, and that’s enough for me to do well enough on the ACT to be able to get out of it in college.”

Kitchen understands lawmakers’ fear that a year with no math or science classes can make it harder for some students to get back in the game, but she says that type of experience happens every summer when kids get out of school.

In addition, while the bill does state that those who “are taking a course of study that does not require math and science courses are exempt,” Kitchen says she, along with many others, want to use their last year of high school to experiment with classes they otherwise couldn’t take and really find what interests them.

“I don’t think they should be passing the bill just because I don’t think it is necessary for everyone to be in math and science through their senior year,” Kitchen said. “I think it should be an option, because by senior year, most people are deciding what direction they want to go with their education and what areas they want to go into, and if math and science [don’t] fit into that, then they shouldn’t be required to take unnecessary classes.”

By Daphne Yu and Jacqueline LeBlanc

Great article! Didn’t even know about the bill until I read the Bearing News article and editorials on it!!