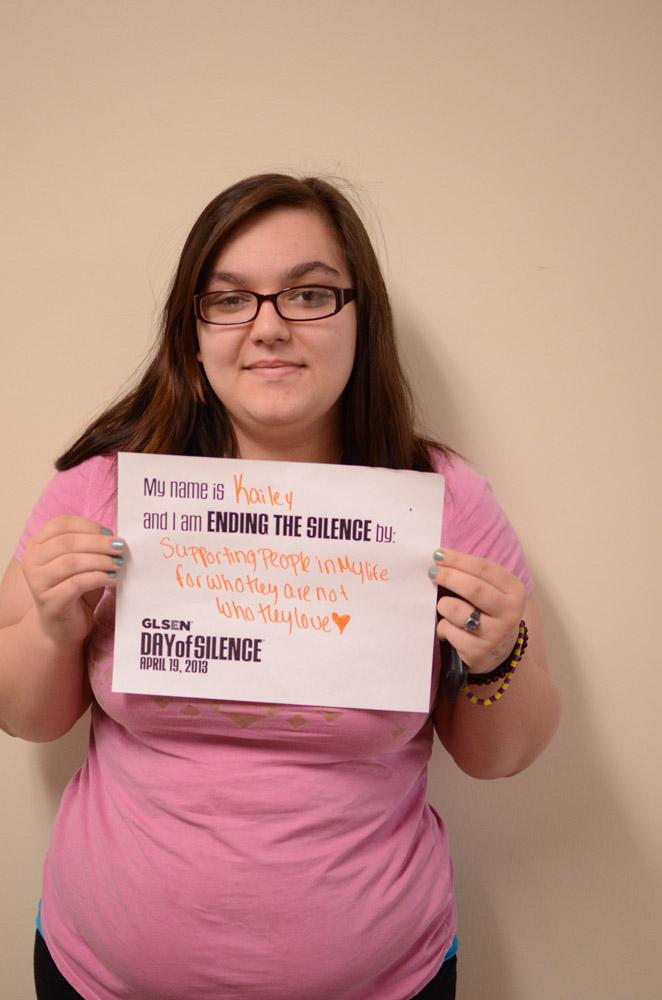 Junior Jazzmine Matthews talks just as much as she breathes. But today, not a single word left her mouth.

She is participating in the Day of Silence, a “day of action in which students across the country vow to take a form of silence to call attention to the silencing effect of anti-LGBT bullying and harassment in schools,” according to their website.

The Day of Silence, founded in 1996, aims to create “safer schools for all, regardless of sexual orientation, gender identity or gender expression.” It started at the University of Virginia, and it now reaches more than 8,000 middle schools, high schools, colleges and universities across the country.

The day has proved difficult for Matthews.

“When I am not eating or sleeping, I’m talking,” Matthews said in a typed interview. “I legit even talk in my sleep sometimes. To do something like this is a huge sacrifice, ask anybody who knows me, but it’s one that needs to be made.”

Sophomore Josh Provenzano, who jump-started the idea for RBHS’ participation in the Day of Silence, said the Day of Silence is important to bring the school community for a common cause. After being bullied for two years himself, the cause hit close to home.

Sophomore guidance counselor Amelia Fagiolo, the current sponsor of GSA while science teacher Stephanie Harman is on maternity leave, said the day is important to get the word out. The club has made T-shirts, posters and fliers to inform the student body on the goal of the day.

Fagiolo said the fliers “guide you to the website where you can get more information and also [are] a way for kids who aren’t aware to know what’s going on. We also sent information out to teachers, and it’s on the [school] website too.”

Junior Katie Hurdle noticed Matthews’ T-shirt that stated “Day of Silence” in her fourth hour class, and Matthews explained her silence to Hurdle through paper. Hurdle said she appreciates the effort to stamp out bullying, but she feels the focus on homosexuality is too narrow.

“I think the cause of standing up against bullying is really good,” Hurdle said. “I think that it should be against bullying in general, because everyone deals with that, not just a certain sector. I would participate in an anti-bullying general program but not necessarily this.”

Despite the challenges, Matthews has stuck to the vow of silence. She strongly believes bullying is something that needs to be “stamped out.”

“I am so passionate about this because while it is not a huge issue in Rock Bridge, many other schools are not so interconnected,” Matthews said. “Having been bullied before, I understand how these people feel and know that something must be done to stop it.”

By Maddie Magruder and Anna Wright

They Call Her Lady Luck

Maddie Magruder is the sweetest person you’ll ever meet. No matter what, Maddie never fails to evoke a genuine smile. Her undying love for Fun, Mumford and Sons, and James Franco is really quite inspiring. Maddie’s natural habitat includes knitting, watching movies, belting out a Broadway song, or laughing so hard she cries. Maddie is a tremendous writer and Production Manager, a determined intellect, a fierce friend, et une actrice incroyable. You’ll really never meet a more loyal and down to earth person, not to mention questionably the most adorable girl on the planet. She’s just quirky and fun. Some say Maddie Magruder is a Disney princess. But Maddie is better than a Disney princess. She’s real. Contact Maddie Magruder, production editor, at mmagruder@bearingnews.org. By Julia Schaller.