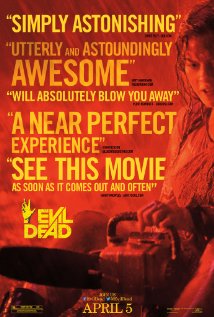 Evil Dead had high expectations to live up to as a pseudo-remake of the ultra-popular and critically acclaimed 1981 horror/comedy movie of the same name. The new Evil Dead, now purely focused on horror instead of crossing between genres, follows the original with only middling results.

While this new take on the Evil Dead’s premise of a group of 20-somethings trapped in the haunted woods offers some amazing special effects and some of the goriest horror in movie history, it’s lacking in genuine scares and interesting characters.  While the movie is entertaining and will definitely keep viewers engaged, its shortcomings keep it from being anything special and relegate it to the slasher sub-genre over true horror.

The movie revolves around main character Mia and three of her friends, as well as her brother, who go to a family cabin in the woods for a weekend. Mia is a drug addict and by taking her from the temptations of the city, her friends believe they can help her overcome her addiction. While this is as interesting an idea as the movie could create, what with Mia’s symptoms of withdrawal (such as hallucinations), the directors abandon this concept about 20 minutes in and never return to it.

Some horror movies get criticized for the length of their exposition before any actual action begins, but Evil Dead suffers from the opposite. There is very little character development leading into the horror, which results in the audience having no real reason to care about or feel scared for the characters. For instance, one of the five characters in the entire movie does absolutely nothing until she becomes possessed about one hour into the movie. Also, while the original Evil Dead did an excellent job building tension throughout the early portion of the movie, this new adaptation skips the build entirely, jumping right into fountains of spewing blood and amputated limbs with little suspense.

The characters were relatively bland as well, especially when the original starred the memorable, over-the-top, chainsaw-wielding Ash played by Bruce Campbell. While Mia (Jane Levy, Nobody Walks), goes through a somewhat interesting transformation, the rest of the characters quickly fade from memory.  Protagonist David, Mia’s brother (Shiloh Fernandez, Red Riding Hood), seems all too calm and uncaring for someone who’s sister is becoming possessed by the devil and whose friends are dying right and left, while Mia’s other would-be therapists Natalie and Olivia have little personality at all.

All of that aside, Evil Dead succeeds as far as modern horror movies go. The genre seems to be less about generating actual fear through atmosphere and plot and more about top violence, gore and shock factor, and Evil Dead takes the next step in all of these categories. Live burials, burnings and amputations act as filler between the even more shocking scenes of self-mutilation and syringe-wielding mania.

For the slasher sub-genre, Evil Dead does nothing new or profound to reintroduce an emphasis on storytelling or character development, but it does everything that a good blood-bath horror movie needs to do to show up its competitors. Most of the special effects are truly incredible and many of the non-stop attack sequences are cringe-inducing. There are also some very effective sight gags and jump scares that the audience will never see coming.

While the beginning of the movie is too rushed, once the terror starts, it is well-paced; the movie jumps from one disgusting act to the next, keeping the audience on the edge of their seat and never relaxed, simply by the fact that another gruesome scene is right around the corner. The ending however suffers and gets downright goofy, dealing with resurrection, raining blood and ritual sacrifice, and it actually ends up making the evil entity look downright weak, something a horror movie should never do. The movie is so off-the-wall throughout that it was surprising and disappointing when it turned out to have a cliché ending.

Evil Dead is a movie that is easy to enjoy, but hard to respect. It sells out on characters and plot, to squeeze out as much blood and gore as possible. An amusing trope into the slasher sub-genre if you’re not expecting anything particularly original or deep, The Evil Dead is shocking and visually arresting but ultimately a forgettable experience.

RBHS student to give talk at TEDxCoMO

David Archuleta returns with ‘No Matter How Far’

Sam is a pretty laid back, fun loving guy who enjoys spending time with his friends, family, and dog Buddy. A long suffering Chiefs fan, Sam loves both playing and watching football as well as most other sports, and has been playing tennis and swimming since he was a little kid. Sam also spends a lot of time listening to classic East Coast rap, with some of his favorites being the Wu Tang Clan and Mobb Deep. Inglourious Basterds is Sam's favorite movie and Breaking Bad is far and away his favorite show. If you want to contact Sam, you can email him at samhmitch17@gmail.com.