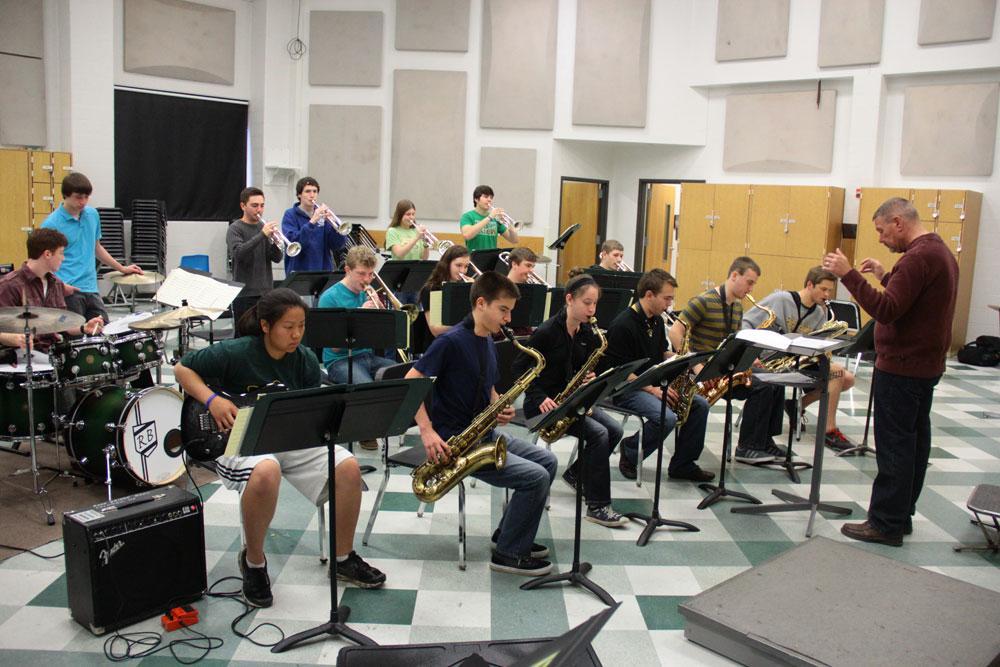 A new groove: Next year, all performing arts groups, including the jazz program, will increase in size with the arrival of freshmen. Photo by Asa Lory

With the move to a four-year high school system next year, the influx of freshmen is expected to alter classroom sizes and structures at RBHS.

This holds true for the performing arts program, where the increased number of new students has already led Columbia Public Schools and RBHS to take preliminary steps in preparation for the upcoming change. CPS and RBHS anticipate the increased number of students in the performing arts programs will require an additional number of instructors for some groups, while for others, the change in size will be the only difference.

“Next year choir is adding another teacher, but band and orchestra ensembles will grow in numbers, but not show an increase in teachers,” CPS Fine Arts Coordinator Dr. Deborah Jacobs said. “The choral teacher will be half-time, and for orchestra, the ensemble might be larger, but there will be only one teacher. The same holds true for band, where there will be one director and one assistant director, as usual, but a change in size.”

All across the board, choir, orchestra and band plan to have a higher number of members next year, and there will be a new total of three bands and four choirs. Sophomore band member Claire Simon believes the negative aspect of having less-experienced freshmen is far outweighed by the positives that RBHS band and all of the performing arts will face with the large addition of students.

“I know when people drop band, it’s usually after freshman year. … Once they’re part of the program, they’re more likely to stay in band,” Simon said. “The negative effects of incoming freshmen that have less experience, over time, could change as freshmen are expected to keep up with upperclassmen.”

Choir and orchestra will undergo similar adjustments said senior Grant Flakne, a member of all three performing arts groups. Choir will have an ensemble mandatory for freshmen, and orchestra is considering a second ensemble along with audition requirements for the top ensemble.

“All around, we will probably just bump in size … and that’s always positive,” Flakne said. “Not a lot should actually change ensemble-wise because orchestra, band and choir are adding ensembles to compensate.”

Despite the addition of groups, Jacobs foresees a challenge in coordinating freshmen. But she believes the challenges can be overlooked because of the positive effect of having larger ensembles and more opportunities.

“With students being at the high school for four years, this should help build the overall programs at each high school,” Jacobs said. “The fine arts programs at RBHS are strong, and freshmen are really looking forward to joining the excellence that has already been established.”

Similar to how Jacobs expects freshmen to be excited to join the programs, Flakne believes current RBHS students will make the best of the revisions in store.

“With the change, we get more time to inundate players and singers to the style that RBHS employs, and a larger selection of performers allows the directors to be a little choosier,” Flakne said. “And the top ensembles should all improve eventually, if not immediately, so I see no reason why freshmen shouldn’t be a part of the senior high performing arts program.”

This is part of the Preparing for Battle ongoing special report. For more information on the changes occurring as the district opens a new high school in the fall of 2013, check Bearing News biweekly for a transition update.

Manal Salim. A name known to all in the journalism room. A name associated with rainbows and sunshine. If she isn’t smiling and asking what she can do for others, Manal is nearly dying of embarrassment from the constant compliments that her friends shower her with. No one can resist smiling in her presence. Manal is the epitome of happiness and is the only one who can justify the writing of a bio as cheesy as this. Unaffected by the mother nature, neither heat nor sunshine affects Manal’s porcelain face. Looking at Manal is like looking into the sun: always bright, always happy, but without the obnoxious constant “glass is half full” outlook that seems to get on people’s nerves. Or at least mine. So do yourself a favor and get to know her. Written by Trisha Chaudhary. Contact Manal at msalim@bearingnews.org.