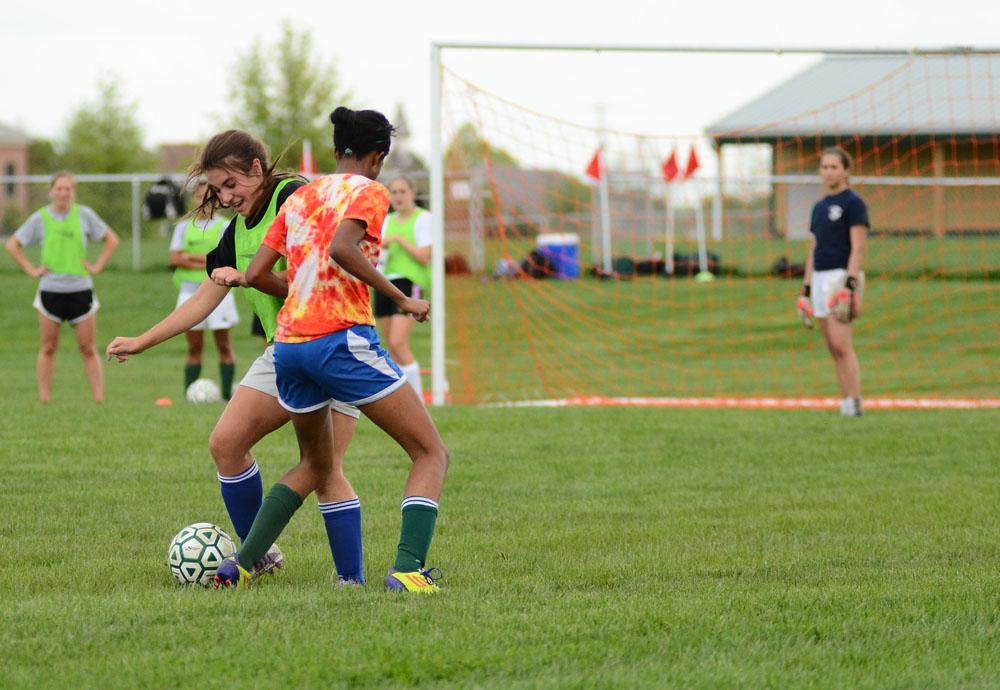 In preparation for the District Tournament, the RBHS Varsity Girls Soccer Team runs routine 3 v 2 drills on the school's grassy upper field. Junior Alexus Carson tries to steal the ball from junior Laurie Frew during one of these drills. Photo by Aniqa Rahman

Spirits were high as the varsity girls soccer team sauntered westward to Skyline Elementary School in Sedalia on Monday, May 13. The Bruins lost to the Kewpies in double overtime that night, with a final score of 2-1.

Sophomore Sydney Griggs said she had high expectations for the match with the work that the Bruins have put into this season so far.

“I think we’re ready,” Griggs said before the game. “My goal and the team’s, I feel like, is to just take each game [one] at a time and focus on each one.”

Griggs’ focus was on Hickman that night, and waves of adrenaline and excitement swept over her right from the start. Sophomore Madeline Harl opened up her game with a confident attitude as well.

“I think we felt like we had already won before the game had even started,” Harl said.

Harl believes this confidence translated into a possible lack of energy in the first half, but quickly changed as the Bruins picked up their tempo against the Kewpies.

At half-time, the ladies were approaching full swing, as they made their first goal of the game midway through the second half. With an assist made by junior Haley Fancher, senior Morgan Bumby sank the ball into the net to tally up the first point for RBHS.

Afterwards, Hickman made their goal in return to tie up the game three quarters of the way through the second half.

“I think everyone saw it coming before it happened,” Harl said, “and I just closed my eyes and heard the reaction of the crowd.”

The second half rode to a close, and into a first overtime period. That overtime period ended, and soon after, both teams moved into their second overtime in an attempt to settle the game.

“It was a golden rule, which means whoever scores first wins. I had gone out of the goal for a breakaway, and the ball found its way into the net, “ Boyken said. “I just laid on the ground in shock and saw my teammates crying … Hickman’s fans cheered. Ours were quiet.”

With the striking and heart-wrenching loss, the Bruins were left with a nauseated feeling, knowing that that game was the last for all of the seniors.

Fortunately, that nausea provided the sparks for the off-season, and the next year’s work.

“We will for sure remember how this felt, and with all the incoming freshmen,” Griggs said. “I think it’ll make us all want to work as hard as we can, so we can make our first game in districts a win [next year].”

Griggs’ teammates echoed her motivation. Although the game sent out pangs of sadness as the shock of the second and concluding goal rolled in, it also brought the RBHS girls soccer season to a premature close.

“Our coach thanked us for making this a great season and [for] overcoming the many challenges and obstacles we encountered along the way which made for a stronger team,” Harl said. “It was their first time being head coaches and we all grew as a unit during the season.”

Harl thinks the finale of this year’s soccer season has only brought on the focus for next year, even through the pain of this latest loss. If anything, this loss gave the Bruins soccer team an ample amount of time to hone their skills, tighten their bonds and strengthen their team as a whole over the summer and through their offseason.

“We will all approach the season differently,” Harl said. “Some seniors may never play competitive again. I, for instance will train for cross-country in the fall to help me build up and feed the fire for next year’s soccer season.”

A 16 year old, odd blend of designer, student, and overall jack of all trades, Alex is a computer guru and constantly searching for new business plans. The latest? Buying and selling hats. Alex lives with his mother, father, sister, and plethora of pets just past Katy Lake.