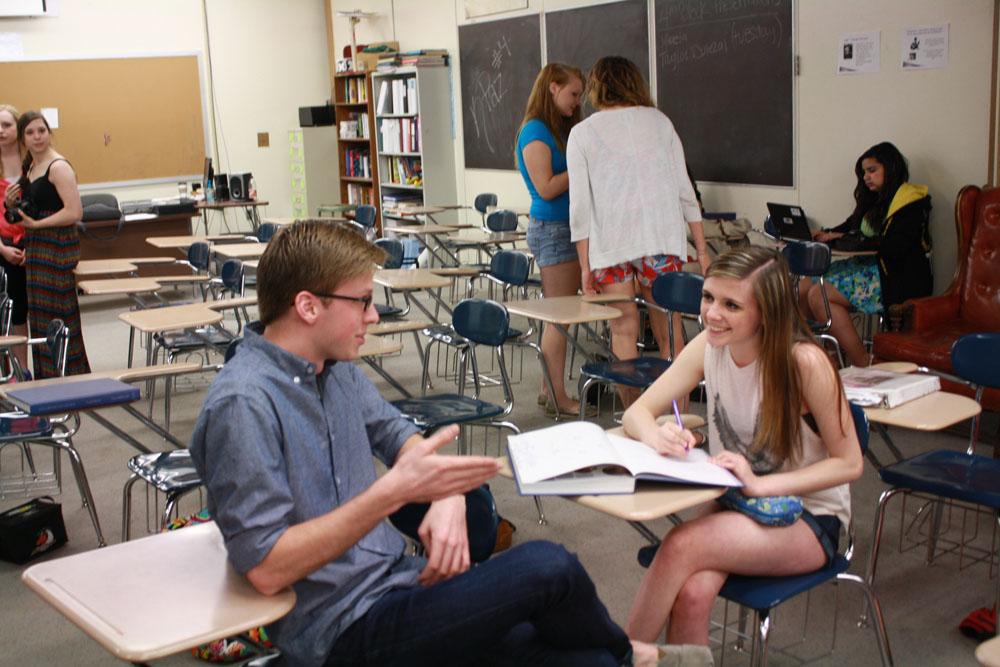 As the school year comes to a close, most student interns at RBHS have come and gone, leaving our school with the skills required for their future careers as educators. For recent University of Missouri graduates Alex Huck and Bryn Orton, however, student teaching at RBHS has been a unique experience. To them, the environment has been welcoming and one of a kind, offering freedom to both students and teachers in the learning process.

“I absolutely think it’s different than teaching at any other school,” Huck said. “With the ‘freedom with responsibility’ culture, I believe it takes someone who can allow the students to have the freedom to express themselves, and I absolutely love that about the school. From my knowledge and limited experience at other schools, that simply isn’t the case.”

Both men spent three semesters in social studies classes at RBHS and have learned the tricks of the trade through observation and hands-on instruction since the spring semester of 2012. In this time they have built relationships with their mentor-teachers, as well as with their students, which Orton believes to have greatly improved his effectiveness as an teacher, and also the learning of his students. Although at first it wasn’t so easy, “crashing and burning” was an inevitable and necessary process for learning and improvement.

“The first time I ever did a lesson I didn’t have a really good relationship with the kids because I was only there, like, two hours a day for twice a week,” Orton said. “There were a lot of blank stares.”

After entering the classroom as a more permanent figure, Orton found success when interactions with his students became more frequent and personal.

These are memories and relationships both will remember fondly as their first experiences teaching at RBHS, and with recent news of their employment at the school, they will surely not be the last. Orton has secured his place in the studies department for the following year, where he will independently teach blocks of AP European History, AP U.S. Studies, and regular US Studies. Huck will return to RBHS through the MU Fellowship Program, working closely with RBHS teacher David Graham as he teaches Government and Pop Culture while earning his master’s degree.

“Alex has proven to be one of, if not the best, student teachers I’ve ever worked with, and that group of former student teachers includes present full time teachers, Mr. Reed and Mr. Nichols,” Graham said. “I feel he could become a great teacher for Rock Bridge High School, and I’m excited that I get to continue working with him next year in the Fellows program.”

The interns’ students at RBHS are equally excited, happy to have seen the progression and aspirations of their student teachers be fully realized.

“[Huck] will be an amazing teacher because he can relate to the students and understands them,” Sophomore Zach Ibitoye said. “I’m pretty sure that the kids next year will enjoy him as both a teacher and a person.”

Dubbed the “hipster student teacher” by students, their encouragement has also inspired Orton, who described the enthusiasm as a reminder for why he chose the teaching profession.

“At least once a day I will have a moment of realization, a realization that I’m doing my dream job at my dream school, and the most beautiful thing about that is how genuinely happy my students are for me,” Orton said.

With the initial excitement of these developments still present, the future RBHS educators have started preparations for their first year of teaching early. Their summer reading lists are already planned out, stacks of history books towering above the piles of paperwork to be filled out and filed before August. Whether juggling graduate courses or mastering their best authoritative tone, the two have a lot to consider these next few months, with their individual teaching styles important factors.

“I’m a very energetic, all-over-the-place type of guy, and I think my classroom environment will reflect that,” Huck said. “Obviously there needs to be some parameters, but I feel that too much discipline inhibits the students’ ability to access a collaborative aspect that I feel is essential to the learning environment.”

Orton’s vision of his classroom is that of a sanctuary for RBHS students, a place to shed the many faces of superior and subordinate high schoolers often don upon entering a classroom. He hopes to instill in his students that apathy and loathing for school and work can only exist if we allow them to. It’s not about quitting, he argues, but rather making things your own and meeting personal expectations before those of society.

It’s a lofty goal, but to Orton, it’s the driving force behind an educational philosophy that will stick with him throughout his teaching career.

“The line between academic work and enjoying the company of your peers should be blurred and often crossed. Work, whether academic or ‘real-world’, whether it is something you love or hate, should never be something that gets in the way of your happiness,” Orton said. “If you don’t enjoy your work, you should learn how to make it work for you, and learn how you can give it a personal significance. I only applied to one school. I filled out half an application to another, but I’ve known since October that this is the only school I wanted to teach at. It’s become a cliché, but Rock Bridge just ‘gets it.’”

And for the upcoming year at least, RBHS will ‘get’ the opportunity to claim these two young educators as our own.

Jilly Dos Santos is a witty, high-strung political enthusiast with a passion for world cultures and blue grass music. If you tweet at her she will respond with lightning speed, simultaneously doing anything from playing tennis with friends to volunteering at any place that will have her. She has a superhuman ability to function without sleep for days, which is probably what allows her to accomplish so many things at once. Jilly is currently learning four languages in hopes of becoming a U.S. diplomat, but her ultimate aspiration is to marry an Argentinian man and raise authentic Argentinian children so she can grow up to become the proud Latina she was always meant to be. Finally, Jilly is a notorious food thief, not to mention a pajama hoarder, so guard your lunch and sleepwear when she’s around. Email her at: jillian.dossantos@yahoo.com. Biography written by Maddy Mueller (the dirty ginger in the profile picture).