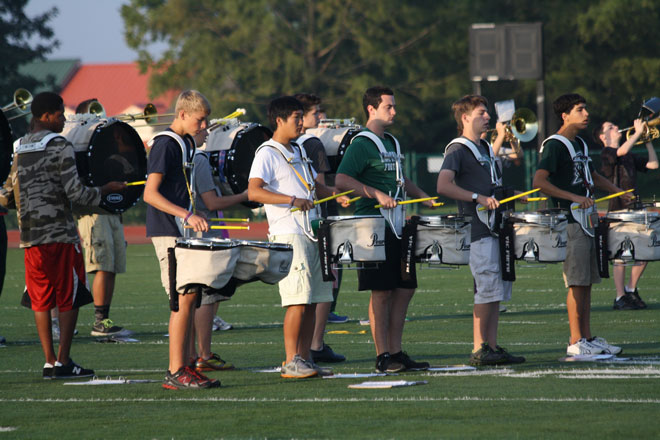 The visitor side of the stands will be a little less noisy at tonight’s Providence Bowl.

Drum major Emily Vu said head band director Steve Mathews wrote in an email to the band last night that there would not be enough seating for them in the stands.

Monday, Sept. 23, Mathews posted a sheet outside his office in the band room. Instructions on the paper said that preference was given to seniors, juniors, sophomores and freshmen in that order. Nearly all the spots were filled, mainly with upperclassmen, by Thursday afternoon.

Vu said the members of the pep band planned to take a bus from RBHS to HHS before the game Friday.

RBHS athletic director David Egan said those students now will be provided seating on one of the six buses Bru Crew will take to the game. They will also be able to purchase tickets at the $3 student price from secretary Christina Thalhuber today. Though the school has already sold out all the tickets for the RBHS student section, arrangements have been made between the two schools to provide tickets to those that intended to participate in the pep band.

“Basically what this is is we want to make this right by the band members,” Egan said. “We understand that they want to be at the game.”

Thalhuber has a list from Mathews of those band students who signed up to play at the game in order to reserve tickets. Despite the accommodations, however, some band students were disappointed in the change.

“The band is really energetic and fun to be in, so it’s really disappointing that we couldn’t play at Hickman,” junior band member Spencer Bumby said. “At least my senior year the game will be at Rock Bridge.”

Regarding the cancellation, Egan said there was a break in communication from RBHS to HHS. Also, the move from Faurot Field lat year at Mizzou to LeMone Field at HHS contributed to the confusion. Faurot seats around 70,000, while LeMone seats only a few thousand. Hickman High School athletic director Doug Mertz said he isn’t sure how full the stands will be.

“I am hoping to guess that there will be somewhere between four and five thousand people at the game, similar to what it was for last year’s [district semifinal] playoff game,” Mertz said. “ That’s kind of the only thing I have to base my estimate on.”

The seating capacity is just one reason for the change, however. Egan said that he isn’t exactly sure what went wrong during the communication and planning.

“It’s just a combination of factors, one of the big ones being the venue change,” Egan said. “When the decision was moved to change venues – on top of that there was the playoff game last year when we brought our pep band. I can’t speak to how the miscommunication happened. I think Mr. Mathews–because they went last year that just the assumption was there that they’d be able to go again this year. He asked me to line up a bus. I lined up a bus, so I interpret that when he asked me to do that I interpret that as ‘he’s got everything set up.’ It could be that Dr. [Jennifer] Mast last year had arranged everything. I don’t know. I don’t know how it happened last year, but I think it’s just a situation where on our end we just made these assumptions and we never followed through. When I was talking with the folks at Hickman yesterday they were like – it’s the first they ever heard of it.”

Beyond those issues, Egan made sure to stress that the blame does not lie with Hickman.

“In no way is this Hickman’s fault. It is not their fault at all. I want to make sure that that comes out, that that’s clear,” Egan said. “This is already an emotionally charged game. There’s already a lot of tension and those kinds of things. The last thing I want is for the flames to get fanned; directed at them when they’re not at fault.”