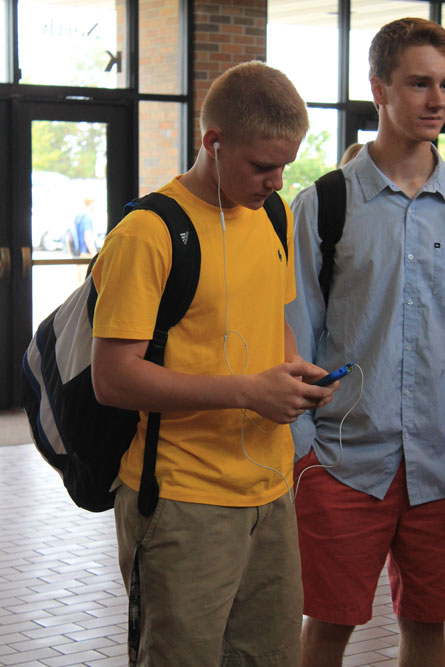 Every day parking attendant Chris Plummer goes out no later than 8:30 a.m. to monitor traffic going into the RBHS circle drive, allowing buses to drop off their students unhindered.

Even with this assistance, it takes some time for students to get off their bus in the morning.Buses can only drop students inside the circle drive, but they are often stuck outside of the drive because of the sheer number of these transporters. One student who has to wait for these buses to clear up is sophomore Mirnes Mustafic who rides Bus 46 in the morning and afternoon. He thinks the wait should be less since it can make him late for morning classes.

The drive can only fit about ten buses before it is filled, leaving the other 17 buses to not only wait outside of the drive, but also hold up traffic. Bus driver Todd Yatsook drives bus 50 and drives for all three levels of elementary, middle and high schools.

“After getting into the circle drive, the process speeds up considerably,” Yatsook said. “There’s only a dozen students on my bus, and after I drop them off I get out of here.”

Although the busing system is crowded, the buses themselves are practically empty. This is because Columbia Public Schools requires First Student to provide transportation to every student, which adds to the afternoon turmoil. Assistant Principal Brian Gaub helps combat the troubling system in the afternoon, allowing kids to get home faster.

“The morning situation is not too bad; one person can usually handle that,” Gaub said, “but the afternoon is very labor intensive.”

The first adult goes out as early as 3:30 p.m. to stop cars from entering the circle drive. Another member of administration heads out at 3:50 p.m., and together they start writing down the bus numbers on a whiteboard so students can find where their bus is in the circle drive.

“By 4:05 [p.m.] there are actually five different adults that are involved in the process,” Gaub said. “There’s one at the North part of the circle drive, keeping cars from coming into the circle drive, and they also have to stop the traffic out on the access road, so that the buses can get out.”

There is also need for yet another adult manning the whiteboard, one at the South end of the circle drive who is stopping the car traffic coming out of the parking lot, along with many in other helpers as well.

“There are many different kinds of traffic [getting in our way],” Gaub said. “There’s the buses that are coming and picking students and leaving, there are parents coming and picking up students, there are students who drive to school and are trying to get out of the parking lot. Some days we have buses from other districts that are coming for sports and activities, they can get confused and get mixed in with our buses.”

Even semi-trucks can take a wrong turn and get onto the access road, blocking traffic and causing even more of a jam. The extent of the main problems include limited space, lots of cars and many different types of traffic.However, there are many things the “10 teacher task force,” as they are named, have implemented to make the process go smoother. The first day of school, the team took 40 minutes to get all the buses loaded and sent off, but now it’s down to 15 minutes.

“We’ve gotten it down to a manageable time,” Gaub said. “In another year or two, when Battle gets fully online, the student population here should get smaller, which will help some.”

With smaller population, First Student can combine buses into larger routes, which they already started. This helped afternoon busing congestion, but First Student can only condense the buses to a certain extent before the time students spend on the bus reaches a

“I think that Rock Bridge should devise a new system or a new place to drop and load the bus riders at,” Mustafic said. “Or just let us off and pick us up before the main entrance so we don’t need to be stuck on the bus or at Rock Bridge as long.”