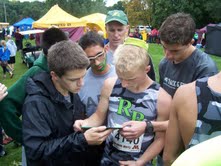 The Roy Griak Invitational, hosted at the University of Minnesota, found Bruin cross country runners in their third meet of the season Thursday, Friday and Saturday. After a nine-hour bus ride, the JV team arrived Thursday  and ran a Mustang Invitational on Saturday at a nearby middle school, while the varsity team waited to race on Saturday at the golf course located on the University of Minnesota campus.

Although the Cross Country team is successful in the rankings so far this year, with both teams consistently within the top five in the state, the meet seemed to result in atypical placements for the team.  The varsity girls took sixth overall while the varsity boys took fourth. Overall, when compared to past performances, the results of this meet seem were rather unusual.

“It sounds kind of low when compared to how we usually rank,” senior Joanna Zhang, member of the girls varsity team, said. “But there were a lot of really high ranked teams from across the nation.”

Megan Gabel, co-coach of the team, thought the meet was worth it because of the experience it gave the students who attended.

“We went to Minnesota meet because it was the largest meet in the country that weekend, and to give the team some more experience with higher level competition than what is in Missouri,” Gabel said. “It was a great opportunity to get them used to high-stakes racing.”

Senior Alex Griner agreed with Gabel. Griner,  a JV Boys runner, said the meet was just another opportunity for the team to measure their performance compared to others across the region.

“We did decently,” Griner said. “It was just a chance to see what we could do.”

Rather than comparing the team to others across the state, the meet gave RBHS Cross Country an opportunity to be measured against teams across the Midwest. Overall, the meet had many benefits for the team.

“It gave them a good feel for what they’ll see at the state meet in terms of course and size,” said Gabel. “It’s a great bonding trip for the team. It wasn’t very far, but the competition was worth traveling for.”