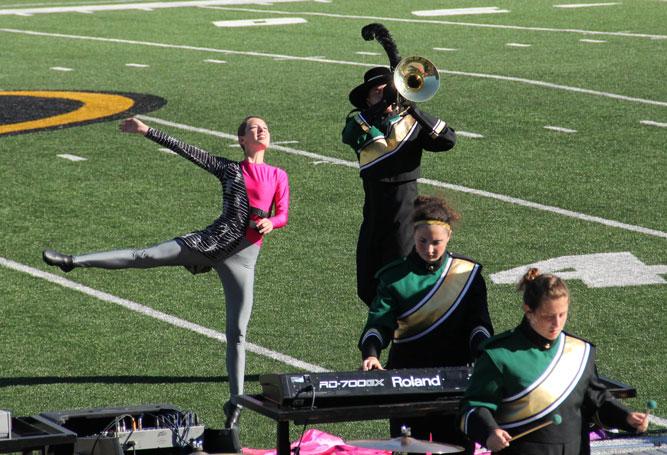 Though they had their bumps along the way, the Emerald Regiment placed second in their division during preliminaries behind Francis Howell Central and received fourth place overall in the Champion of Champions competition held at Faurot Field.

All three Columbia Public School bands: RBHS, Hickman High School and Battle High School bands, made it to finals yesterday, Oct. 12 – the best of which, according to the judging, was RBHS. Junior trumpeter Robby Schmidt said the Emerald Regiment did well this time overall, with the outcome of last night’s events illustrating this. He was happy to beat rival HHS.

“I thought we played better than we did in the last few competitions,” Schmidt said. “They were our first few competitions and people were kind of nervous, and I think we got over that a little bit this time. [Beating HHS] was definitely a high point for me. We were only ahead of them by a point in [the preliminaries] so I was happy to beat them.”

The nerves that hindered the Emerald Regiment before, in Schmidt’s opinion, were necessary to get rid of to compete against  their opponents. The competition at this particular event was more difficult, according to junior tenor player Jared Myers. The larger schools from St. Louis also attended, such as Francis Howell Central, the competition winners,  yet Myers said the band had a good competition and delighted in placing higher than HHS band.

“Our Pit is always strong and our Color Guard did really well and it never gets old beating a rival,” Myers said. “I thought [getting fourth] was great. For RBHS, competing against the giant St. Louis Bands that have a lot of money and their giant bands, to put up that good of a fight was just great.”

Though Myers thinks they did well overall, he still sees room for improvement for the band of getting to their dots, or pictures that the entire band makes from an overhead view either as they march or stand still in a smoother fashion. The band can do this by making sure not to take small steps towards or large leaps by correctly spacing their marching to get to the position that they need to be in by the end.

“I think our drum line could get a little better and I’d say we hit our dots pretty well,” Myers said, “but just getting there is interesting and needs some work.”

To supplement to the scores for competitions, Schmidt said that the technique as they are marching of toes going up and then rolling down and off the heels to make better steps is lacking. For them to do better in the competitions to come, everything needs to be more precise.

“We need to work on cleaning up and making sure that every step we take has good form,” Schmidt said. “I know that when you think about what dot you have to go to, what note you have to play, you can start to just shuffle your feet and not use the right technique.”

With all of this in mind, the Emerald Regiment hopes to improve before their next competition, Bands of America, this Friday, Oct. 18.