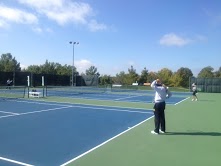 The Bruins warm-up before their first of two sectionals matches. Photo by Jay Whang

Even in the breezy morning weather, the Bruin tennis team persevered through the Sectionals tournament. Hoping to advance to the State tournament once again, the team met Incarnate Word Academy and Parkway Central on Saturday, Oct. 19 at the Bethel Park tennis courts. The gusty winds and cool temperature didn’t prevent the Bruins from defeating Incarnate Word Academy 24-0 and Parkway Central 23-1, advancing to State.

“I thought we played a very sounded dual meet in a sectional final here with Parkway Central,” Coach Ben Loeb said. “They got a very good team, they pushed us in many spots, and we responded under a tough circumstance.”

Before the game, Loeb gave pep talks to his team, urging them to fight hard. The first match with Incarnate Word Academy started around 10 a.m. and ended in less than half an hour, with most RBHS players winning 6-0.

“When it was 5-1 in the second set, I was like, ‘OK, I can win this match.’ And I got one more, and I am going to state for the first time,’’ junior Phoebe Boschen said. “You know you kind of built up, and the last game I was like ‘I am just gonna go hard and hit this and get off the court with a killer shot.’’’

The second and last match with Parkway Central started around 11:45 a.m. and ended around 2:50 p.m.. Along the way, Tess Lovig had tough times competing against Kaoru Saitako and remembered to rely on Loeb’s advice.

“My coach told me to stay positive and what kind of shot I can hit and helped me to be successful in this match,” Lovig said.

As the game concluded with a doubles match, Loeb is now looking forward to the upcoming State tournament.

“It’s exciting to go get another Final Four and the competition only gets stronger,” Loeb said. “We can come through it and it would be a great sense of accomplishment.”