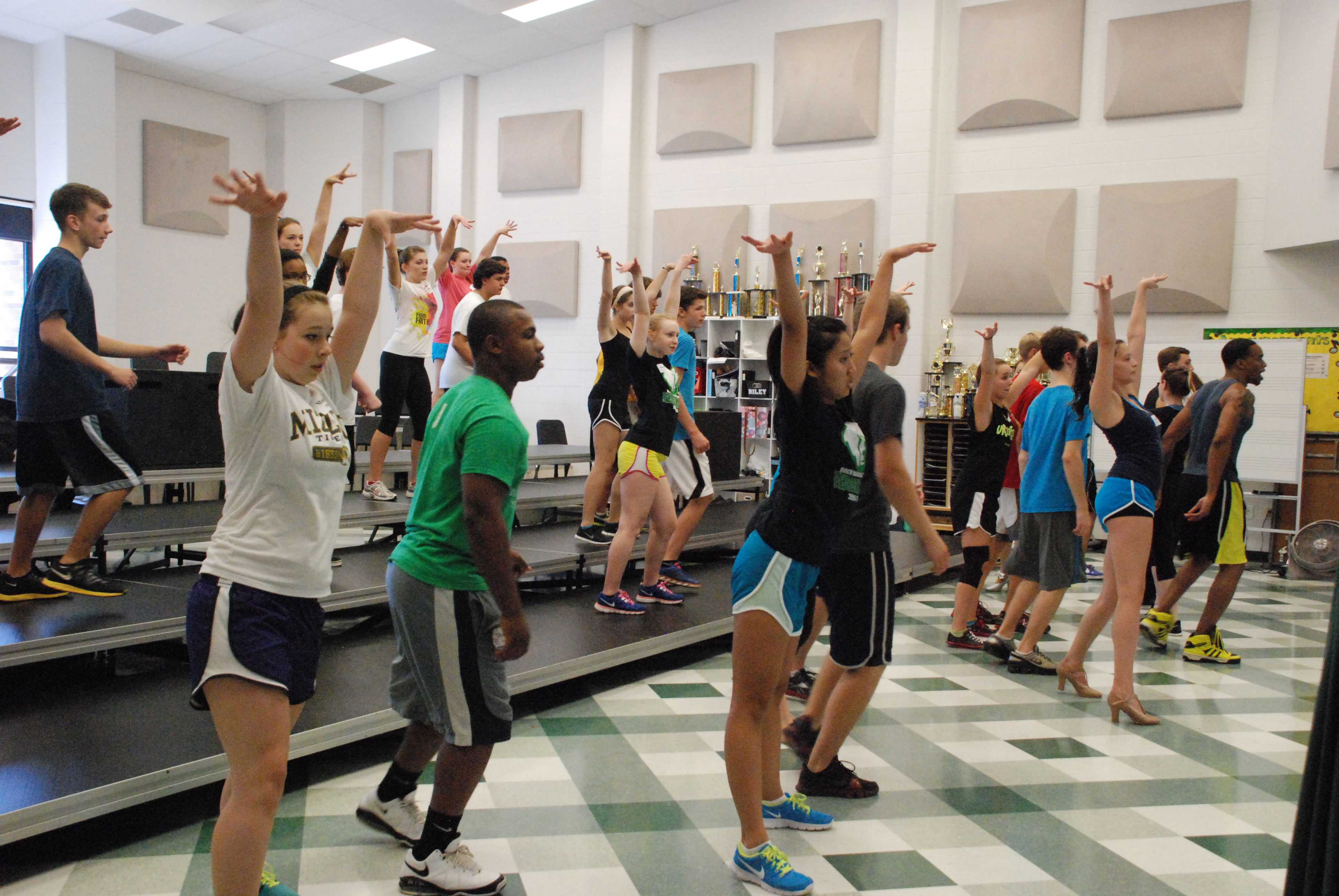 Choir students gathered in the music hallway last weekend with one central goal in mind: to learn, in two short days, two songs worth of choreography for Satin N’ Lace, the all-girls show choir and City Lights, the mixed show choir.

Choreography rehearsals on Saturday, Sept. 28, and Sunday, Sept. 29, topped more than 13 hours. No matter how experienced or in-shape the student, bodies ached after the long hours of practice.

Senior Hannah Sage, a member of Satin’ N Lace, said her feet throbbed from all the heel work required for the Latin-themed show.

“I’m ready to take some pain meds and sleep for a few days,” Sage said.

New to the show choir scene, sophomore Christian Henry, a member of City Lights, struggled to learn the choreography to the all-boys number, “Bang Bang.” The song, originally sung by Will.I.Am, includes kicks, spins, and squats.

“I didn’t think I would get sore,” Henry said. “I thought it’d be a little bit easier in that way.”

Antwon Chavis, one of two City Lights choreographers, traveled to Missouri from New York City for the weekend to rehearse with the students.  Chavis, who’s been dancing for 27 years and choreographing show choirs for 11 years, was a participant in high school show choir himself and chose his career path based on his personal experience.

“I was in show choir when I was a senior – it was the worst year ever of my group,” Chavis said. “I said that it would never happen to another senior class as long as I was a choreographer.”

And it looks as though he’ll follow through on his word.

“I really like how [Chavis] was … fun, but he’s also strict,” Ngo said. “Whenever we had to … do something, we needed to get that done quickly and he didn’t waste any time,  and I really like that because it went by a lot faster.”

Henry agreed with Ngo and appreciated the experience of working with Chavis.

“I thought [Chavis] was like awesome,” he said. “I liked the way he [choreographed] … I think it was a really cool experience to learn from him.”

Both groups look toward show choir competitions with hopeful hearts and anticipate success.

Observing the show choirs from his office and from the far edges of the choir and band rooms with his critical blue eyes, Pierson was also pleased with the start to the season.

“Both shows look to be very dynamic. Both groups are singing very well,” Pierson said in an e-mail interview. “We now begin the process of fine-tuning the choreography to the songs we know, adding choreography to other songs and putting the shows together. It should be another successful year.”

This makes me so excited to come back and see the show choir!!

I can’t wait to see what the choirs look like this year. Great story guys, it’s nice to stay updated 😉