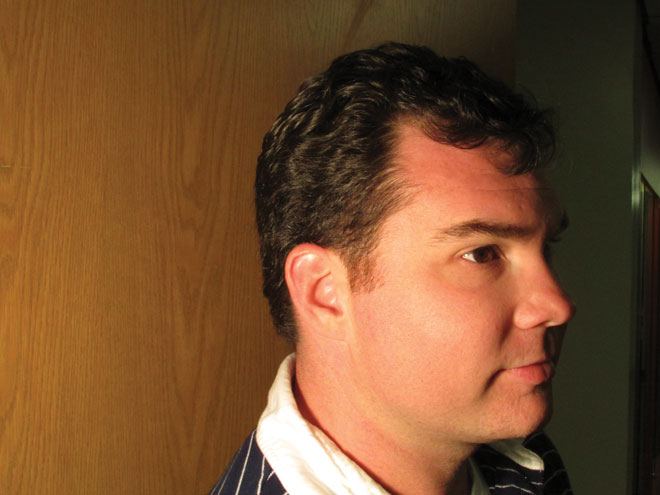 Learning guitar, making an album with his wife and ushering in places like the Amphitheater, Scottrade center and Mississippi Nights for contemporary productions prepared AP Psychology teacher Tim Dickmeyer for a second job. Without pay, he took a position in June 2013 where he reviews music for earbuddy.net.

Earbuddy.net is a “music website established in 2011 with a strong, but not exclusive, focus on independent music — all genres accepted but discriminated on a writer-to-writer basis” according to their website. Dickmeyer reviews music sent to him by his supervisor, Chris Bell.

“You’re supposed to write about the music and not about you. It’s tough becoming a music writer instead of a guy who writes about music and I’m not there yet,” Dickmeyer said. “So on that first draft you want to give everyone an A, because I know what it’s like to make your own album and how hard it is.”

Music has been prevalent, dynamic and a source of passion in his life ever since he can remember. In fact, he first started playing his own music at the age of four when he received a gift from his great-grandfather.

“My great-grandfather was a professional accordion player, and he was actually a bugler in WWI, but he considered himself a keyboard player even though he played the accordion,” Dickmeyer said. “He got me my first instrument which was the Little Tikes piano, which was actually in tune.”

From Little Tikes to an actual piano, Dickmeyer’s grandmother tried to instruct him about musical theory, which proved useful for him when all of his friends decided to buy instruments and play in the school band. The problem was, at the time, Dickmeyer’s family did not have the financial stability to buy an instrument. Fortunately, the school already bought a euphonium and told Dickmeyer that he could have it for free if he would play it for them. After he performed a few years for the school, he decided that band was not for him, yet music drew him back after his first year of high school.

“Freshman year I kind of did my own thing. All these sports teams, almost all the guys in my school went out for them so I really started missing music because these other things were taken away,” Dickmeyer said. “So the summer between freshman and sophomore year I found this guitar that my aunt had in the basement. After that, at the end of summer, I bought my first guitar.”

Playing guitar through high school and college resulted in a first date with his wife, Alison Dickmeyer. For him, it was love at first sight, he said. He told his friend right when he first saw her that he was going to marry her, even though his friend said she was out of his league. He proceeded by attempting to flirt with her, but she did not want anything to do with him. Later, they both were at another friend’s party. Though Dickmeyer wanted to do nothing other than play the guitar that night, he made an exception for a special girl.

“She just walked up to me and was like, ‘I didn’t know you played guitar.’ So I think she fell in love with me because of music,” Dickmeyer said. “My wife is actually a classically trained cellist so she can both knock out a Tchaikovsky piece and also play rock and roll without seeing music. [Music] was a key attraction in our relationship, but it wasn’t that [first attraction] for me.”

Ten years later, Dickmeyer made an album with his wife as Christmas presents for some friends and family. They were unsure of where they were going to be financially that particular year, overloaded by how materialistic people became, in their opinion, and did not want to spend all of their weekends shopping.

“We decided, ‘Let’s just make something for someone.’ So here it is, in November and December, we spent everything on our own. The pictures, the recording, you know just everything,” Dickmeyer said. “Some people were like really judge-y about it, and we were like, ‘Well, that’s just going to happen.’ We were together, so we were happy.”

The beginning of his experience with any albums was when Dickmeyer received his first cassettes as a child of “Slippery When Wet” by Bon Jovi and Def Leppard’s “Hysteria” along with a boombox to play them as gifts for first communion from his family. Dickmeyer took them to the Catholic school he attended during third grade despite his fear of being punished by the nuns for having them.

“I remember in elementary school there was this kid with a little cassette player. We went to Catholic school, so we would go in the back and hide on the playground because we thought this was devil’s music or something,” Dickmeyer said. “We thought that we were gonna get in all kinds of trouble. [The records were] the most metal thing we had ever heard of.”

After listening to and enjoying Bon Jovi, Dickmeyer began collecting records. Prior to modern day conveniences of Spotify, Pandora, YouTube and other musical outlets such as Earbuddy, music was more difficult to get for high school students.

“It’s really cool that the internet is now allowing this resurgence of getting good music out,” Dickmeyer said. “If you write a really good song and you put it online, people will share it. That’s awesome, so now people can rediscover all these older artists, too.”

Although he is doing something he is passionate about, the luster of it is starting to wear off. Reviewing music can be stressful when he has limited time after working at school and wanting time to be with his family.

“In some ways I’m thankful to have my professional life away from my music life, I really do,” Dickmeyer said after his friend and boss Chris Bell introduced him to Earbuddy. “I mean, I would love to [write columns and more reviews] but [the people that do that] come home and that is what they do. I maybe have one or two hours to focus on it but I have other priorities.”

Even though his profession is not intertwined with his passion, Dickmeyer is happy to instead be teaching high school students AP Psychology.

“There are other ways to contribute to society and yourself and you still get to hang on to [your passion],” Dickmeyer said. “[Music] is something you pour your heart and soul into and then you kind of offer it up to others to judge you. It’s a hard, emotional experience. Whether its art, photography, you know, whatever your passion is, you can still hang on to and not have it be your job.”