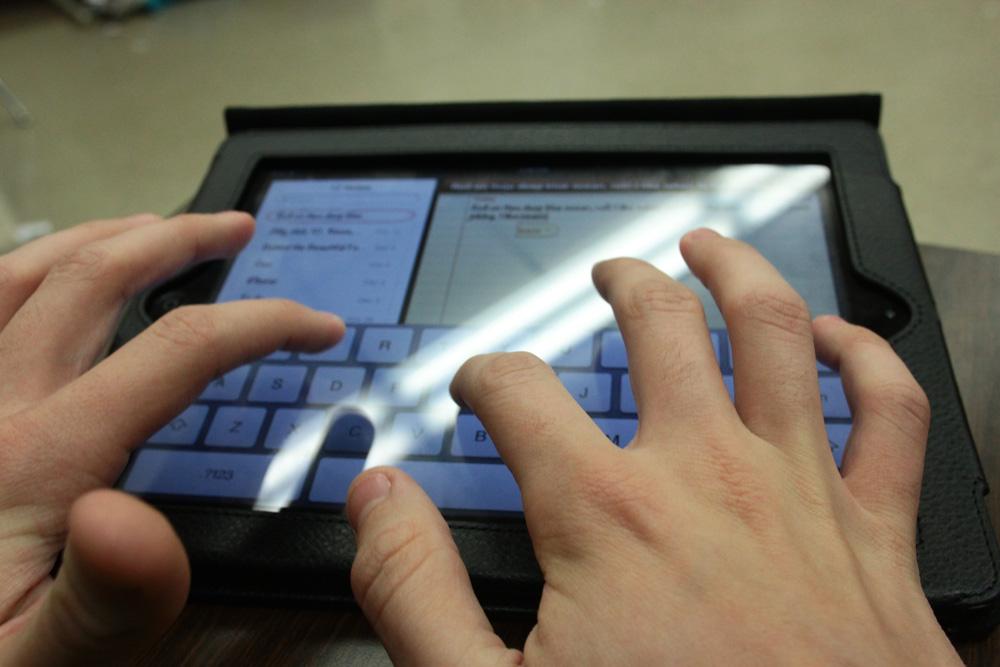 A war exists among dozens upon dozens of armies and it is happening at all times in the United States while many do not see it or even feel it.

All tech companies, like Apple, Samsung and Microsoft, among many others, are competing to make the best product in every possible field, like the best cell phone or the best car. I like to call the war between them the tech war; each battlefield has an ongoing fight between two or more armies. There are no sides and no allies. Between Apple and Microsoft there is the computer battle and between Google and Bing occurs a search engine battle.

The list could go on forever, but there is one specific battle that is raging between at least five different companies, with many coming and going as they please. This is the tablet battle.

Apple first released the iPad, considered the original tablet, on April 3, 2010. The most recent models, the iPad Air and the iPad Mini, were continuations of the basic iPad model.

One year ago, a likely competitor launched its new product as well. With the release of the Surface RT and Pro, Microsoft entered onto the battlefield of the tablets.

There are many reasons why I prefer the Surface to the iPads we received this school year. The Surface has a kickstand, which allows people to watch movies and videos and read things with ease. Instead of holding the tablet in your hands and getting them tired or having to place something behind the tablet, just extend your stand, sit back and relax. Most notably, the Surface has a built-in USB port and a microSD port, which allows for up to 64 more gigabytes of extra space.

For an extra $80, people can buy a keyboard made specifically for the Surface that fits neatly and easily onto the bottom of it by way of magnets. It may seem like an expensive accessory, but if someone is going to buy the Surface, it would be a loss if they don’t purchase the keyboard.

In a lovely addition by Microsoft, the Surface comes with Office Home and Student 2013 RT for free. This is the biggest thing that sells me for the Surface. It allows me to type with a laptop-like keyboard into a program that is on almost every PC and that is compatible with almost every type of word-processing program. On top of that, I can easily plug in a USB and transfer files from my Surface to any computer.

In order to decide between two similar, but different products, the main idea that comes to mind with most people is the price. Surprisingly, the Surface RT is only $349 compared to the $499 price tag for the iPad 4. With the keyboard, the price comes out to about $430, still almost $70 cheaper than the iPad.

In my view, the pros of the iPad are minimal and do not give a solid reason to buy it. The largest positive the iPad has is the retina display, which is only useful in an extremely close view and even then is barely noticeable. The iPad has two hours of extra battery life compared to the Surface, which is a positive. Apple, however, had two more years to develop a good battery in comparison with Microsoft, while Microsoft was able to make an eight-hour battery life in its first tablet. Microsoft is sure to improve its battery life in future tablets.

Every time I try to use the on-screen keyboard for the iPad mini, the autocorrect beats me. I notice the typing has a slow response, which allows for many typos to occur if you are trying to type quickly on the screen. Once you make a typo, it always seems the autocorrect chooses the most bizarre choice for correction.

For example, a few days ago I was trying to write the word “might” and because of the slow response of the keyboard, it turned out to say “migt,” which for some reason autocorrected to “mitt.” With an actual keyboard, I am able to type faster and better, which overall speeds up my work. Yes, you can buy a case for the iPad that has a keyboard, but those keyboards use Bluetooth, which drains the battery.

A couple weeks before the Oct. 22 release date of the Surface 2 and Pro 2, Microsoft announced that they already completely sold out both products, showing better sales than the Surface RT and Pro released a year ago. The next generation of the Surface will be much stronger of an opponent to the iPad.

If I had a choice between the iPad Air, the newest version of Apple’s tablet, and the Surface 2, the newest Microsoft tablet, I would definitely choose the latter. The Surface 2 has a $449 price tag for the 32GB model and a price of $549 for the 64GB model. On the other hand, the iPad Air has a cost of $599 for the 32GB and $699 for the 64GB. Cheaper and better? Microsoft just made my choice easier.

After squeezing through the other “armies” on the battlefield, Microsoft now face their strongest challenge yet. Will they be able to win the tablet battle against Apple? I think they have all the right ingredients to win and that soon, there will be no arguments against the Surface as the supreme tablet.

Abdul has lived in Columbia his entire life, but his parents are originally from Iraq. He likes video games, computers, soccer, and writing. He spends a lot of time watching videos on YouTube and he is a big procrastinator. To contact him, send an e-mail to abdulrahmanabdulkafi@gmail.com.

^So like, I don’t agree with that. Anything but apple is just a cheap impression in my mind. GO APPLE fa lyfe.

I also beloeve in these tech wars between apple and samsung. I am not a fan of Apple. Actually I hate Apple. I like Samsung the best. I don’t if samsung has a tablet or not but the school should have gotten an android tablet instead of apple.