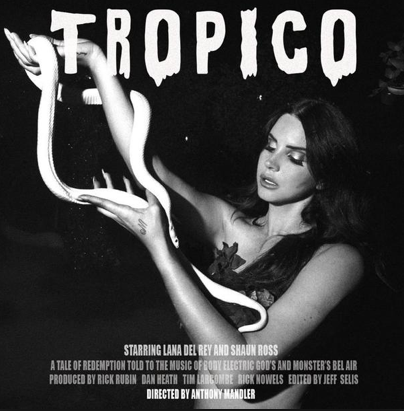 The first time I listened to Lana Del Rey sing, I felt like I was being lulled into sort of fugue state of mind. Her songs hypnotize you and numb your brain, her short film Tropico being no exception to this rule. The half-hour video starring Del Rey and Shaun Ross was set to the songs Body Electric, Gods and Monsters and Bel Air; all songs off of her albums Paradise and Born to Die.

I was not sure what to expect from the video at the beginning, I figured it would be a couple run of the mill music videos back to back. After sitting  through 27 minutes of Elvis, Adam, Eve, gangsters, strippers and Marilyn Monroe, I had come to the conclusion that I had absolutely no idea what I had just watched. But after several minutes of intense head scratching, I began to piece it all together.

The description of the short called it “A Tale of Redemption,” which I can definitely agree with based off what I could gather. The film left much room for interpretation with the word redemption as it showed the progression of mankind scene by scene. Beginning with the creation of sin, then moving into a portrayal of modern day crime and ending with a sunny dream like dance scene, director Anthony Mandler does a fantastic job of leaving it up to the viewer to construe Tropico as they pleased.

The production also make it so that there was no longer focus only on Del Rey’s voice. Although her talent is nothing to be questioned, having a visual aspect more intricate than a normal music video made all the difference. It felt as if the music had been put to picture, something that all artists should aspire to reach in their music videos, instead of just singing to the camera.

Musicians in pop culture are being given a podium for their work, and far too often they squander opportunities to showcase it. Del Rey, however, has refrained from doing so, Tropico being the perfect example.

It could be said I am reading too deeply into this, but I honestly think that creations such as Tropico will, or at least should be, the future of music television. These lengthened videos including multiple songs allow for the music of modern day singers to be treated more as an experience.

The only thing that could have made the concept even more fantastic would be to make it longer, making it have all of the songs off of Born to Die. That is not to say that I was unsatisfied in the least with what was presented, I just wanted more of it. I can only wait for the day when works such as Tropico become more common. It will be the day when people become less intolerant and more understanding to different types of music. But whether it was accidental, or on purpose, Del Rey has single-handedly opened up a whole new world of opportunity in pop culture, one that will almost certainly only bring good.

Student View: Should the break be called Winter Break or Christmas Break?