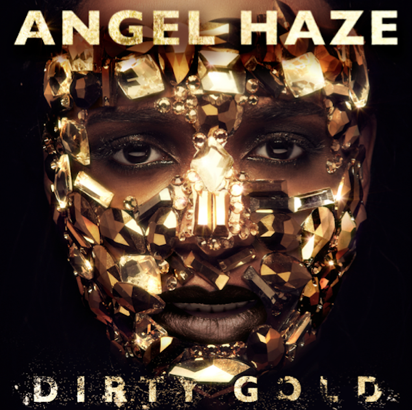 Angel Haze, a relatively unknown and underrated hip-hop singer and rapper, recently released her debut album titled Dirty Gold. I had never heard of her, and I typically don’t listen to the rap, but I was pleasantly surprised to hear this album. She brings complexity and meaning to her music, which includes melodious beats that are hard to resist.

The first song I was drawn to on this album was “Battle Cry,” which features the Australian singer Sia. I was familiar with Sia and her captivating voice, so I had high hopes for the song. I was not disappointed. Angel Haze raps, “I woke up one Sunday morning/stopped believing in Jesus/stopped believing in churches/I stopped believing in preachers.” The song takes a close look at spirituality and believing in yourself. There is deeper meaning when it is learned that Angel Haze grew up in a highly restrictive religious group called the Greater Apostolic Faith, which Angel Haze refers to as a “cult.”

Angel Haze has created a plethora of ear-catching tunes despite growing up in a restrictive religion, which even banned listening to music. It wasn’t until she was 16 years old that her family left the church to go to Brooklyn, N.Y. After Angel Haze’s mother was threatened by the leader of the church, the family knew it was time to leave.

The relationship between Angel Haze and her mother is illustrated in the song “Black Dahlia.” Black Dahlia is a nickname given to Elizabeth Short, a woman who was brutally murdered. It is a mystery to this day who committed the crime. While Angel Haze’s mother was not murdered, perhaps the connection is that Angel Haze’s mother lived a life of suffering. One lyric states that if Angel Haze could go back in time to change her mother’s past, “Maybe I would write you a happy ending, I would rearrange the pieces to your sad beginning.” I’m not sure on all the details of the song, since it is a melody created for Angel Haze’s mother, but it’s obvious that there was plenty of thought and feeling put into every word.

Lyrical depth seems to be in endless supply on this album since each song has its own nuances in each line. In the song “Deep Sea Diver,” Angel Haze uses the metaphor of the sea to explain a tragic love. “See we were deep sea divers, and I was focused on survival, and death does you part when you’re focused on its rival, defibrillator love, I’m just focused on revival.” Along with the undeniable catchiness and rhyming of the song, the poetic lyrics make this song one of the best on the album.

Every song on Dirty Gold could be analyzed in further detail considering that Angel Haze obviously put enough thought into each tune. It’s an impressive album, even more so when it’s known it’s only the first she’s put out. I look forward to more of her songs and wish her much success with this album.

Have you listened to the album? Which song do you like the most?