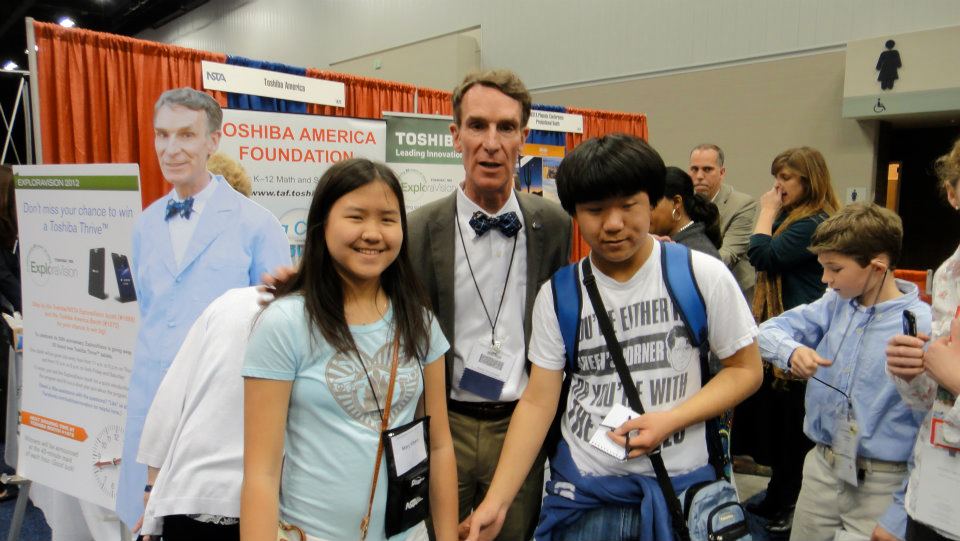 I even shook hands with him! Photo by Theresa Whang

Teaching evolution in public schools has long been one of the most controversial issues in this country. In 1925, a school teacher named John Scopes was accused of violating Tennessee’s Butler Act, which made teaching evolutionary biology in public schools illegal, marking the beginning of the infamous Tennessee v. John Thomas Scopes trial, or as influential cynic Henry Louis Mencken famously called it, “The Scopes Monkey Trial.”

Though Tennessee repealed the Butler Act, the battle is still not over.

To this day, Tennessee (and other Bible belt states) still allow educators to teach creationism, or a literal interpretation of the Book of Genesis, in tax-funded science classes. Even better, when a right-wing genius proposed an alternative to this faith-friendly science called ‘intelligence design’ to provide a more scientific look at how life formed in six days. Or best yet, when an ancient “Pastafarian” stirred up concern over this alternative or a Louisianian Buddhist student was harassed for “not learning”?

As someone from an Asian country, I couldn’t help but sympathize with this Buddhist student. It is hard to accept the fact that some people believe faith and reason are completely separate entities, which they should never be. I went to a Christian private school during my first three years of elementary school. There they valued science so much — believe it or not — that they even declared April as ‘a month of science’ and showed us an episode of Bill Nye the Science Guy (with Korean subtitles) every morning.

For contemporary Americans, a religious school that declared April as a science month might sound contradictory. Many fundamentalists would probably go cray-cray over this, calling it out as a liberal oxymoron: a religious education that champions ‘tools of Satan.’

But I want House Democrats to push a national law that April is a month of science; a moment of the year that emphasizes the importance of science education.

Sadly, this now-rote controversy has made many young, high-minded atheists believe in stereotypes that Christians are the most irrational creatures in this country. What leads both sides believe in such things? The dominion theology movement. The Christian Rights movement, starting with Christian Reconstructionism in the 1960s, believes that America should be considered a Christian nation that God had envisioned. Because of this, they relate many classic “American traits,” like capitalism and our unique justice system, to the Bible or Christianity.

Which leads to Ken Ham’s Creation Museum at Petersburg, Kentucky, where Ham’s literal interpretation of the Bible comes to life. Inside the museum, they have realistic humans living among dinosaurs, and argue that evolutionary science leads people to commit more dangerous sins like putting pants down for happiness. I would speculate that the place would be like The Flintstones theme park but grittier. From regular theologians and Christian thinkers’ point-of-view, Ham’s take on the holy text is troubling.

In the documentary film, Religulous, free-thinking comedian Bill Maher interviewed former Vatican observatory director Father George Coyne in order to argue back at Ham’s literal view. Fr. Coyne, a Roman Catholic priest, pointed out that the period gap between the writing of the scriptures and modern science is large enough that it should never be taken literally as a science. Ross Douthat, a practicing Catholic and conservative op-ed writer of the New York Times, also briefly made a similar point on Maher’s talk show. He believes that the writer who wrote the Book of Genesis never thought of it as a scientific account of world creation.

Although the Catholic Church and other numerous mainline Protestant clergies accept evolution, the fundamentalists still claimed they have evidence in words, but no physical proof. They opposed evolution because, in my own words, it could bring social Darwinism into children’s education and take God out, so the school would descend into chaos. This whole cultural war restarted last year when my childhood science hero, Bill Nye, made a Big Think video about why teaching creationism is not appropriate.

In this video, Nye defends evolution and explains why science education matters: “Your world just becomes fantastically complicated when you don’t believe in evolution,” he said in the video. “The idea of deep time, of this billions of years, explains so much of the world around us. If you try to ignore that, your world view just becomes crazy, just untenable, itself inconsistent.” He then concluded: “It’s just really a hard thing, it’s really a hard thing. You know, in another couple of centuries that world view, I’m sure, will be, it just won’t exist. There’s no evidence for it.”

Not surprisingly, Ham’s Creation Museum later made a series of rebuttal videos done with similar camera angles and a similar editing style to the one the Big Think used. In a serious attempt to explain why holistic science matters, they used pseudoscience neologisms I had never heard of and many other fallacies average logicians won’t dare to use.

After a year-long fight, both Nye and Ham decided to make peace by making a public debate together at Ham’s museum.

In fewer than a few minutes, the tickets for the February debate sold out, and people, especially euphoric atheists, were anticipating the event by preparing their own fedoras and cyber popcorns. The publicity built up and commentators, scientists and teachers were concerned about Nye’s decision to play chess with a pigeon. Some speculated that Nye decided to do so he could reestablish the national reputation he had in past.

On Feb. 4 the day came, and many turned on their computers to watch the live stream of the debate over the integrity of Ham’s creationism. I was about 13 minutes early, and I prepared my Twitter page on iPad. The streaming first introduced an animated version of Ham in his native Australian accent telling his audiences that “kids 12 and under” are free to enter his phony museum “in 2014.”

Sorry, Ken, kids prefer watching “The Flintstones” reruns to your museum ‘cause kids “12 and under”’ find the historical science of the cartoon show more fascinating.

The question of the debate was: “Is creationism a viable model of origins in the modern scientific era?”

Ham made his first argument: “The creation/evolution debate is really a conflict between two philosophical worldviews based on two different accounts of origins or historical science beliefs, and creation is the only viable model of historical science confirmed by observational science in today’s modern scientific era.”

Then Nye, in his iconic bow tie, simply introduced his argument: “Is Ham’s creation model viable? No, I don’t think it’s viable.”

In order to explain my observation, I created two scientific terms called “bias science” and “fallacy science” when I saw Ham wondering what the world would be like without creation science. He explained that naturalism will outlaw supernatural beings and impose the atheistic view on students, which contradicts American religious freedom. He went on that if people prefer naturalist ideas over his translation of “God’s words,” then the civilization would fall down with gay marriage, euthanasia, abortion and moral relativism.

So, Ham wants to defend the society from moral relativism by advocating killing (potentially innocent) prisoners in rows — the Answers in Genesis supports death penalty.

Through my own fallacy-scientific view, I saw Ham going down a slippery slope rather than saving children of the rye. He made a statement that science without the Bible could lead society into moral relativism.

The question is: why does science need the Bible rather than beaker cups? Why would society go downhill?

There is not much specific evidence for that argument.

Furthermore, Ham attacked evolutionary biology, complaining about how Darwin argued that white people were superior. Then he proceeded to explain how his literalist scientific view was never compatible with Darwin.

Adding insult to injury, he quoted the American English translation of the Bible over and over.

I also discovered another biased science when Ham mentioned that there is a wooden stick that is fewer than 60,000 years old inside the Australian coal. Without thinking deeply, he immediately confirmed that his conclusion is right, that the Earth is 60,000 years old, much like the Genesis story in the Bible.

Nye then deconstructed Ham’s young-earth creationist view through mathematics and real evidence found by scientists. He gave his audience a moment to imagine what Ham’s world would be like. He smoothly defended himself from Ham’s fallacy attack by providing a clear explanation of how science works — without using repetitive neologisms like “observational science” and “historical science.”

During the second half of the debate, the moderator, Tom Foreman, asked random questions to contestants from audiences. Whenever Nye answered scientific questions, he gave clear answers in a fascinating way. But when Ham responded, he always said, “There is already a book about it,” referring to the Bible.

The moderator asked Ham: “Would anything change your mind?” Ham paused for seconds and instead of answering the question, he elaborated on his Christian belief and stated that nothing would ever change his view on evolution. Nye just stated that all he needed was one piece of evidence that could change his mind on Darwinian evolution. At that moment, I thought, “this is the best exposure of Ham’s inner psychology.”

In a closing statement, Nye gave a patriotic speech, if I can summarize, that in order to move America forward, we have to strengthen science education by discovering more and thinking more. He quoted Carl Sagan: “When you’re in love, you tell the world.”

The end result of this debating experiment, according to the poll on Christianity Today, showed that 92 percent of voters thought Nye won the debate, while the other 8 percentage thought Ham won. In conclusion, the majority of the viewers agreed with the progressive philosophy of Bill Nye, the Science Guy, more than pseudo-theology of Ham, the Creationist Guy.

I appreciate Nye for getting people like me interested in science, and I felt so happy when I remember the time I met him at a convention a few years ago in Indianapolis. At that time, he seemed much older and less energetic than I imagined. Still, he is the Science Guy, and I considered him America’s favorite science teacher.

I remember discussing the cultural war in America with my mother; we both joked that a talking cartoon sponge has more imagination than these fundamentalist Christians. What this country really needs is to encourage children to imagine more about the world.

That’s what education is all about.

Did you see the debate? Whose arguments did you agree with?