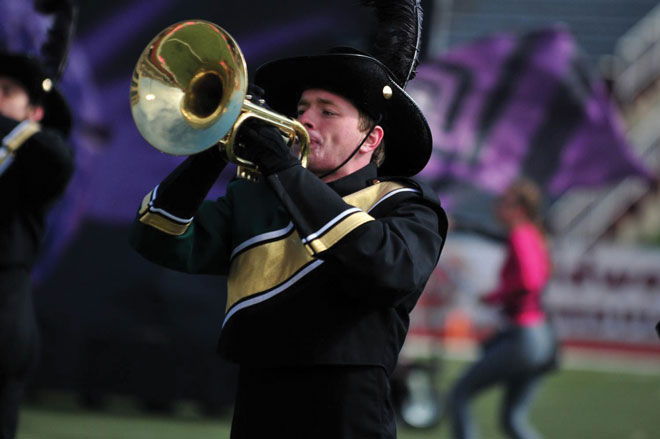 Change is in store for the Emerald Regiment, RBHS’s competitive marching band.

In the past year, the band worked with a new assistant director and faced the challenges of two grade levels of new marchers. After one full year as assistant director of bands, Patrick Sullivan will take on the tasks as director of the athletic bands. This job, Sullivan said, will utilize his strengths and experience and will balance the responsibilities and stresses currently placed on the head director Steve Mathews.

This change will spread the responsibilities of the program between the two directors, Mathews said. Additionally, Sullivan said, spreading responsibilities will alleviate the stress of running the band program, which has negatively affected Mathews’ health this past season.

“I think that it’s probably a good change. I know … since Mr. Sullivan did march with a corps, I think that he has a lot of expertise that Mr. Mathews doesn’t necessarily have,” Orf, who feels that Mathews ran the program well, said. “I just think that with Mr. Sullivan’s expertise we can take it to a whole other level.”

In addition to Sullivan’s new title, the directors recently announced the theme of the Emerald Regiment’s field show for next fall. “Moonstruck” will be the first show commissioned for the Emerald Regiment, and it will be written by Craig Fitzpatrick, who will compose music fitted just for the band, Sullivan said. This is a push in a new direction, he said, because in past years the band has used shows arranged for and performed by other bands.

“This step in the new direction is actually making something that nobody’s played before, coming up with conceptual ideas and tailoring it just for our band,” Sullivan said. “We can right now say, ‘Well, we’re going to be strong in this area, probably not as strong in this area, we’re going to have to tailor it to make sure we have this person featured as a soloist, we know we’re going to do this here,’ instead of trying to take some stock show and tweaking it, you know, square peg round hole, to our band.”

[pullquote]“I think that with the level of talent we have here, and with the culture that’s been growing, I think we’re going to do fine.”

Initially skeptical, Orf believes when he hears the music and sees how the drill interacts with it, he will appreciate the show more. Sullivan said the show will visit three main phases of the moon to illustrate how the moon might affect an individual and will use themes from Beethoven’s “Moonlight Sonata” and Van Morrison’s “Moondance” to create the tones for each phase.

In “the first segment, we’ll be using segments from Moonlight Sonata, the second segment with the dance will be Moondance… And the last segment, the crazy segment, will probably intertwine some of those things,” Sullivan said. “But [it] will be an original composition by our arranger and it looks like it will probably end with a little Moonlight Sonata again with kind of a lonely, kind of romantic side.”

With this new show, the band plans to hit the ground running to prepare for competitions. The greatest change in next year’s program is students will start two days earlier, Sullivan said, so they can spend the Thursday and Friday before band camp learning music and marching fundamentals. The idea, he said, is to cover fundamentals so marchers can learn drill on Monday, the first day of camp, which will push the band ahead of the curve.

“We’re really taking a lot of initiative this year, and I think we’ll see a lot of early success that we haven’t necessarily seen in past years,” Orf said. “Mr. Mathews has said he wants to get our show done before we even go to our first competition, whereas some years we only have parts of our show done … Now I think when we go to our first competition … the show will be more cohesive, [since] we’ve had more time to practice it.”

For this next season, Mathews looks forward to the effects of adding more assistance through the specially arranged show and the effects of finding direction so early on. Mathews said each year there continues to be a more positive spirit within the band and that each year students want to do better.
In addition to improvements and changes in the program, Orf said next year will have a stronger class of veteran marchers, since the only new marchers will be freshmen.

“We’ll have a higher ratio of veteran marchers to new marchers which will really benefit our band because, obviously, veteran marchers are generally better since they’ve done it before,” Orf said. “I think this ratio will help the freshmen because I think the veteran marchers will be a good influence. Having a lot of them when there’s a lot of veteran marchers, [upperclassmen] kind of have an obligation to make it a good experience and I think we can make the kids get really serious about it this year.”
Orf said with more upperclassmen, there should be stronger players and stronger marchers, which will affect scoring in competitions as well as positively influence underclassmen. For Sullivan, this year has been a new experience, yet he shares a similar hope for the coming year; he believes the culture of the band and the amount of rehearsal time will bring positive results.

“This is my first experience with Rock Bridge this year, so I’m just taking in how the band has done this year and there’s no telling. This is something new, something fresh, and so I think that with the level of talent we have here, and with the culture that’s been growing, I think we’re going to do fine,” Sullivan said. “I enjoy the idea of not really worrying where we place at festivals but really worrying about what we can control, like we can control where our dot is on the field we can control what we play and if we control that we really monitor how well we do our individual shows, I think that once we get to festivals we [will] find success.”