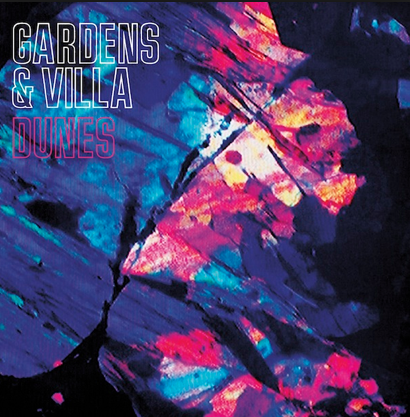 I was intrigued by the colorful album cover, along with the fact that their label goes by the comical name of “Secretly Canadian.” Perhaps it may be said that one shouldn’t judge based on a cover, but I did, and I was glad to find that my intrigue led to a gratifying album. Gardens & Villa is not a band I had heard of before, but after just a few songs off their new album “Dunes,” I was humming along. Their indie pop vibe is chill and relaxing; perfect to listen to on these snowy days.

According to iTunes, their most popular song is “Bullet Train,” which makes great use of the synthesizer and bass line to create a delight of a song. It’s no surprise that it’s popular. I do love the song, but the falsetto is a bit overdone. However, I may be too critical on that front since I don’t like high-pitched singing to begin with.

Like strange poetry, the lyrics of indie songs can be shallow or cryptic at first glance, but are definitely worth a second look. They can be interpreted in many ways, which is why I look forward to see if the band will put out music videos, particularly for “Bullet Train.” Lead singer Chris Lynch sings “the young die young if they work too hard” throughout the song. Perhaps he’s referring to the modern culture that values money, power and careers more than their own happiness, health or family.

While “Bullet Train” is certainly a fantastic song, my personal favorite is “Domino.” The flute makes an appearance in several of the songs on the album, but the flute intro in “Domino” is exceptionally catchy. Flutes don’t generally make it into modern music, but this album demonstrates that the flute definitely has a place in modern songs.

“Dunes” certainly has its share of quicker paced songs, like “Domino,” which are the best of the album. There is definitely a darker feeling to this album, even with these catchy songs. It was a smart move to release a somewhat dark album in February, a cold month in which most people are dreading winter as it stretches on. “Dunes” definitely fits the aura of February.

Overall, I find this album highly enjoyable. Some of the songs that rely heavily on falsetto, like “Chrysanthemum,” aren’t my favorite. However, the pros definitely outweigh the cons, considering that “Dunes” brings a whole new energy to music. The combination of ‘80s style beats, the synthesizer, flute and memorable beats make it an excellent album for February, or any month for that matter.

‘Labor Day’ proves to be a story for the heart, not the mind