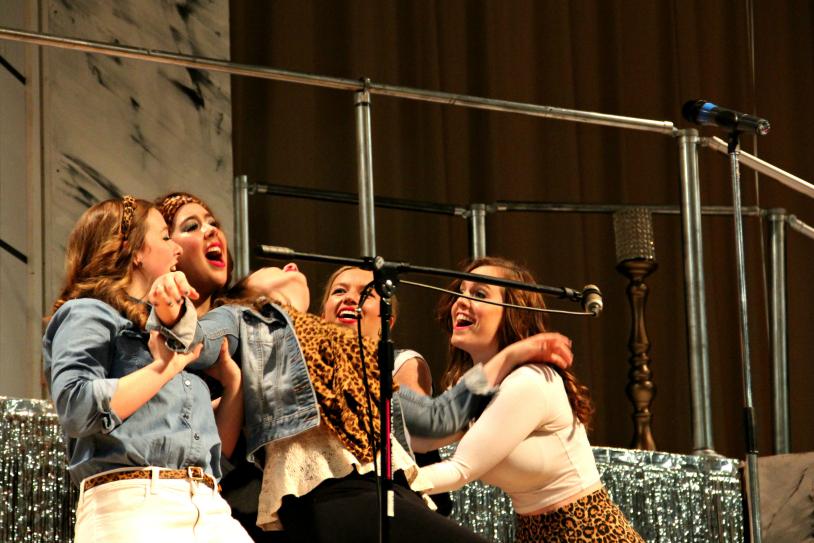 This Saturday, RBHS Show Choirs Satin n’ Lace and City Lights wrapped up their 2014 season with the Appetizer and Dessert benefit. For the evening, the RBHS gym assumed the identity of Jay Gatsby’s dining room for one of his famous parties with a Latin theme.

Every year, the benefit serves as a huge fundraiser for the next year of competitions, in addition to being a send off for the year’s seniors, who perform with show choir for the last time after dinner.  For the seniors, this performance is a cathartic one, the closed curtain serving as the closed door at the end of their show choir career, one which, for many, has lasted since their sophomore year.

“It was just about taking the night in and its meaning,” senior Hannah Sage said, “I spent a lot of time backstage standing silently with my best friend while I cried and we waited for the curtains to open for the last time.”

Sage has been involved with Show Choir in every way possible for the past three years at RBHS.  She has not only been a member of Satin n’ Lace for the past two years, but she has been involved with tech, and worked on costumes throughout high school. The choir family has become so important to her over her years at RBHS, it’ll be tough to leave them behind, said Sage.

But the family keeps the choirs together. Sophomore Sean Garfias is a first year show choir member, and he plans to continue through his own senior year.

“The rehearsals are extensive and tough,” Garfias said, “but the people are wonderful and they make it so much fun.”

So the show choir family welcomed lucky invitees into their home on Saturday to celebrate the end of another fantastic season with them.  Students filed in with vegetable trays to the tune of “Be Our Guest” at the start and throughout out the night, they served two more courses of high-class finger foods while students performed self-prepared cabaret acts on the gym stage.

Finally, it was the time for the choirs to perform their Great Gatsby and Latin themed shows, the close to a great season which included City Lights winning grand champion twice, and both choirs earning firsts in their divisions and countless caption awards.

“I have said more than once that I wish this was a year we were going to nationals,” costumer Victoria Mongillo said,  “because I think we would have kind of kicked butt.”

After a long night, the show choirs earned $11,000 dollars for the program which will go toward shows and events for this year and next.  The season might be over but not a day will go by till the end of time when show choir will quit getting loud and raising the roof.