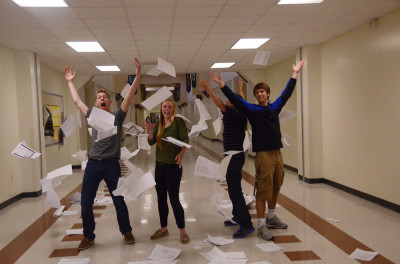 The attendance office phones were ringing off the hook Monday when senioritis struck hard. Roughly 50 percent of the senior class was absent in celebration of an unsanctioned, student-lead senior skip day. Similar to past years, many students opted out of their usual school day routine in favor of other activities. Assistant Principal Dr. Baker said an outstanding number of senior absences made it clear to faculty that students had chosen their annual senior skip day.

“Senior attendance was much lower [monday],” Baker said. “I haven’t looked at the numbers yet but it’s pretty obvious that they organized and this is the unofficial senior skip day. When we looked at it, it looked like maybe about half the seniors [were absent] and we had almost another half that skipped a couple fridays ago.”

Senior Carly Rohrer said she chose to participate in senior skip day in order to enjoy a relaxing day which otherwise would have been focused on schoolwork. Rohrer said she spent the extra time with her friends in order to make the most of her day off.

“Today I chose to get more sleep than I usually do on school nights,” Rohrer said. “My friends and I took advantage of the pleasant day and hiked in Rock Bridge State Park, even stopping to wade in gans creek. It was beautiful and also a great time with friends.”

Though making up missed work can be a burden, Rohrer said it was worth it to skip the day of school. Losing time in the classroom is a trade off for more time spent on leisurely activities, she said, but it’s all a part of the senior tradition.

“I tend to seize every opportunity to miss school because who doesn’t love a day off,” Rohrer said. “Although it is kind of a sacrifice because you’re not excused automatically and you still have to make up work for classes you miss which has potential to get you behind in school. However, this threat does not phase me as I obviously skipped.”

Because the event is not sanctioned by the school, students who participated in senior skip day were counted as unexcused unless called in by a parent, Baker said. Many students’ parents notified the school of their children’s absences in order to help them avoid LOP punishment. Baker said this adds a significant amount of stress to some staff members.

“This morning the phone calls just did not stop for the first two hours we were here and the phone messages that we had, dozens of phone messages,” Baker said. “It puts a huge burden on the attendance secretaries, but they’re used to it.”

Students whose parents did not call to pardon them from school were counted as unexcused, Baker said. He said roughly half of the absent seniors were excused by a parent, with the other half marked as truant.

“I’d say it’s about 50/50 from at least my part of the alphabet, we got swamped with parent phone calls, lots of messages, lots of notes lots of phone calls excusing their kids for the day, they didn’t give a reason,” Baker said. “We won’t track those kids down but we will try to track the ones down that did not have a parent call, even if they are 18.”

Some students opt out of the senior skipping experience in favor of sports or academics. Senior Madison may said she chose to attend school monday in order to be present for two important tests.

“I decided to come to school because I had a really big bio test and a lit final and I’ve already missed a lot of school so I felt like I needed to be here,” May said. “I think a lot of people were gone, a lot of my friends were kind of in the same situation as me where they had a lot of stuff to do today or with practice, like with track you’re not allowed to skip.”

Though the school discourages missing school except when absolutely necessary, Baker acknowledged a sense of tradition surrounding senior skip day. The unofficial holiday has been in existence for years, he said.

“It’s unnecessary, but it’s expected,” Baker said. “It happens every single year, probably ever since they invented a senior class.”