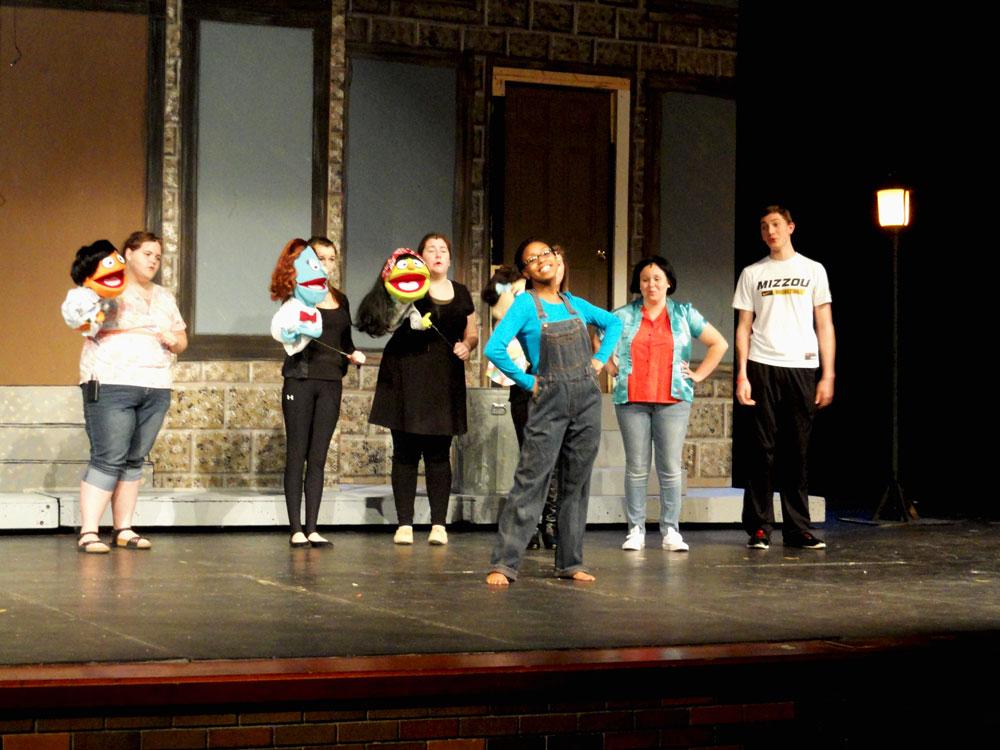 Advanced acting teacher Mary Coffield and musical theatre teacher Mike Pierson grew tired of the complications they had in sharing the stage for their classes’ end-of-the-year productions five years ago. Pierson and his musical theatre students put on a musical, while Coffield and her students prepared an entire play for the following weekend. Theatre tech classes struggled to create sets for two full shows on back-to-back weekends. Coffield and Pierson decided it was time for a change. They created the Theatrical Showcase.

“We had been talking about alternatives for a couple of years and just decided to jump for it,” Coffield said. “The first year, our students were very disappointed and rather negative about the change. However, when we actually put on the Showcase, they learned that they had more variety in what they got to do, and more of them actually got the spotlight. After the first year, the grumblings lessened, and by the third year, it was a given we do it this way. We’ve had a blast with it ever since.”

Unlike the all-school musical in the fall and the all-school play in the winter, the Theatrical Showcase contains scenes from multiple plays and musicals.

The 2014 Showcase “is all about the Tony’s, so all of the shows that we are doing have been nominated or won a Tony Award,” current musical theatre teacher Robin Steinhaus said. “So if you are familiar with the Tony Awards at all, that’s what this show’s going to be like.”

Traditionally at the annual Tony Awards ceremony, a well-known, successful actor or actress hosts the event. So to complete the award show vibe, two seniors, Tateonna Thompson and Piper Stretz, will emcee the show.

“Two of our students, instead of having roles in the plays, are emcees for the entire production, so that we’re kind of mimicking the concept of an award show,” Coffield said. “These two people will come out and give the audience a little idea of what’s coming up. So the audience doesn’t have to rely completely on the program…and to kind of give that feel of an awards program as we’re going along.”

Thompson, an active theatre participant since her eighth grade year at West Junior High School, looks forward to hosting the show and believes it will bring extra flair to the program.

“I feel like having an emcee for the Showcase will help the audience get more involved and better understand what they are being shown,” Thompson said. “I don’t mean to brag, but Piper is the funniest person I have ever met, so being able to work hand in hand with her is what will be the icing on the cake [for] those coming to see it.”

As emcees, Thompson and Stretz will introduce a scene from a show to the audience prior to its performance. Their guidance will be needed as no scene is alike.

“Audience members can expect a variety of genres from this show,” junior Musical Theatre student Kyra Florea said, “but definitely a lot of great music and fun acting. There will be something in this show that everyone will enjoy, so no one should miss out.”

Because of the range of shows each scene represents, audience members will experience a variety of emotions. Shows include A Chorus Line, Crimes of the Heart, The Odd Couple, Kinky Boots, Guys and Dolls and Rock of Ages.

“We have really serious things, like ‘At the Ballet’ is pretty serious, and ‘Crimes of the Heart’ is pretty serious,” choreographer Tammy Walker said. “But then there is a lot of comedy in ‘The Odd Couple’ done with girls, which is really cool, and ‘Kinky Boots’ which will have fun, fresh costumes and then the ‘80s. I mean, we’re really taking a trip, almost like on a time machine of musicals, because we have music from the ‘80s, music from the ‘50s with ‘Bushel and a Peck,’ some rock ‘n roll, some ballads. I think they can just expect a cornucopia of Broadway.”

[box title=” ” style=”soft”]The Theatrical Showcase will premiere May 9-10 at 7:00 p.m. in the Performing Arts Center. Admission is $7 or an RBHS student activity pass. Tickets can be purchased in the performing arts office, located between the band and choir rooms. For reservations, call (573) 214 – 3119.[/box]

Have you seen any of these shows? What are you looking forward to in the 2014 Showcase?