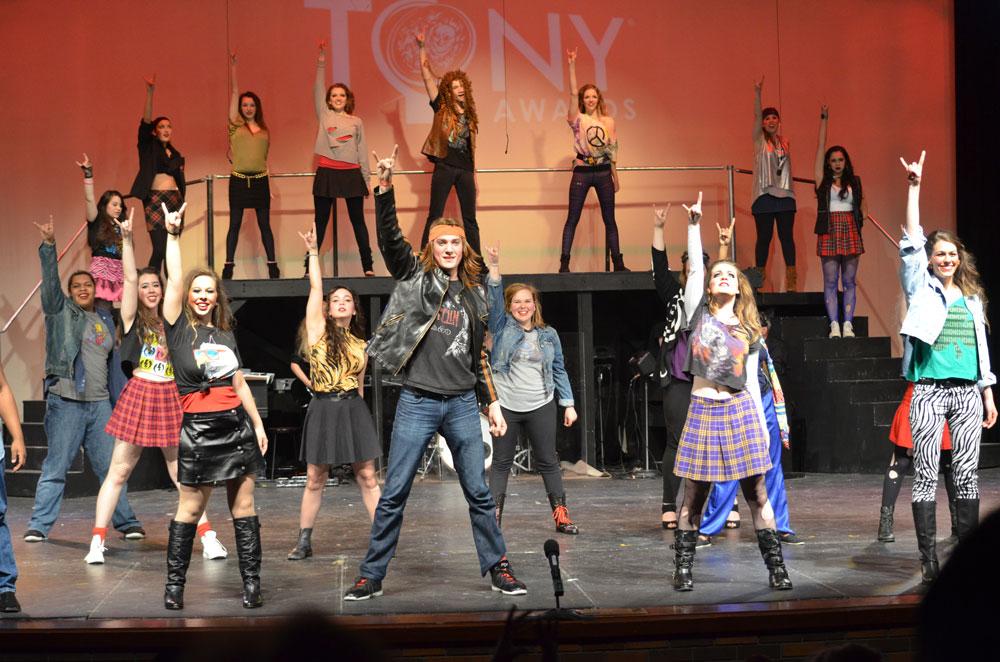 Musical theatre and advanced acting students entertained audiences with their annual Theatrical Showcase on Friday and Saturday night. Based on the Tony Awards, the showcase included scenes from eight different plays and musicals, all of which won or were nominated for a Tony Award.

Seniors Tateonna Thompson and Piper Stretz emceed the event to complete the vibe of an awards show. Thompson, an active theatre participant since her eighth grade year at West Junior High School, thought that having emcees helped the audience better connect with the performances.

“My role as an emcee was to introduce the numbers as they came along and provide comic relief to the more serious numbers,” Thompson said. “I think it helps the audience to…have a more laidback experience, like they don’t have to take so much into account themselves. We’re handing it to them a little bit more.”

The audience needed the direction of emcees, as no scene was alike. Scenes ranged anywhere from serious dramas to cutesy dance numbers to an 80’s rock number that concluded the event.

“We just kind of went back and forth from fun, to funny, to serious. It was all over the map,” Thompson said. “I think we had something for everyone.”

Shows included Kinky Boots, Crimes of the Heart, A Chorus Line, Avenue Q, Guys and Dolls, Next to Normal, The Odd Couple and Rock of Ages.

For seniors, the showcase marked their last theatrical performance on the Rock Bridge stage. It was senior Maddie Phillips’ third and final Theatrical Showcase at RBHS.

“It was really fun and sad at the same time,” Phillips said. “It was a good ending … because the show was really fun to do and … a lot of my good friends were in it, so it was fun to go out with them, too. I have loved every minute I’ve spent on that stage.”

And not only was it the seniors’ last big hurrah, but it was also acting teacher Mary Margaret Coffield’s last show. After serving at Rock Bridge for 11 years, she retires at the end of this school year.

“I can honestly say I have enjoyed every play I have done at RBHS,” Coffield said in an email interview. “I know some have been more successful than others, but I think in each case, students learned skills and developed significant relationships, and I hope, positive memories. Our job is to help students develop their skills in theater and, I also think, their skills in living life with confidence, creativity and generosity. The Showcase we just completed is a fine example of what I am talking about. I imagine every student involved can describe positive learning for herself or himself. I witnessed each piece in the showcase grow in its performance value during our days of preparation, and even during performance nights. Ending with this Showcase was a great experience for me because I love the collaboration it represents, and I loved the preparation of the non-musical scenes with my advanced acting students.”

Did you see the Theatrical Showcase? What was your favorite scene?