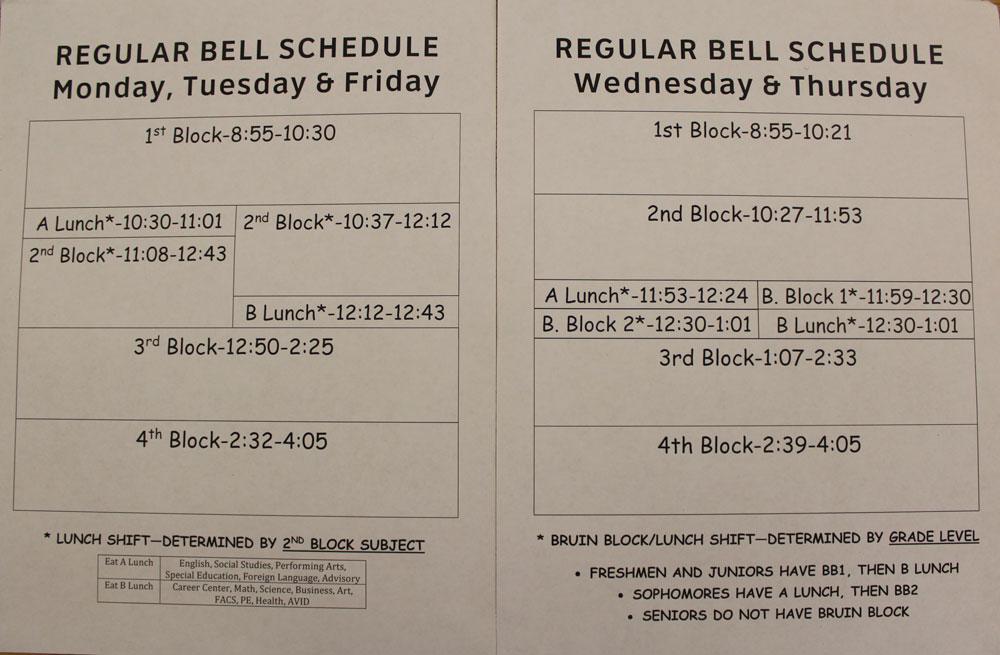 As a response to the discontent about Bruin Block, the schedule for next year has been changed so that Bruin Block will only happen twice a week on Wednesdays and Thursdays.

At the beginning of its first year of running at RBHS, freshman Zach Doster and Ben Howser started small petitions but those petitions did not lead to any changes.

“My concerns are that most of the lessons that are taught in Bruin Block are very irrelevant to our lives, they shouldn’t be taught in a classroom and more of a lesson we learn from life,” freshman Zach Doster said. “I really do believe it oppresses the belief that Rock Bridge is a school that is outlined by freedom with responsibility.”

A recent survey of 400 by The Rock was handed to a third of the freshmen and sophomore classes. One of the questions asked whether “Bruin Block helps with academic success;” 87 percent of the students surveyed answered with a “disagree” or a “strongly disagree” to that statement.

“We didn’t want to take away any freedom from the upperclassman because they were used to having freedom since they had a year before Bruin Block,” Mast said. “We implemented this Bruin Block policy for only current freshmen and sophomores because they hadn’t had the feel for the freedom, and they got Bruin Block just as they entered the school.”

“[The like day scheduling] will be a lot nicer for me because I have to stay after school till about seven o’clock on days that I have to post schedules,” Bryce Cordry, a media center helper, said. “Next year, that will already be there so it would just be one less schedule to put up.”

How would you want to schedule to be like?

Track and field ends season on a high note at state

Devesh loves taking photos, learning new skills such as various technologies and helping those around him in whatever way he can. He can recite pi if you ask him and is a faithful friend.

Hey Izzy, I just want to tell you that there will never be a point in RBHS when they will cancel Bruin Block. Bruin Block will always be there. The only thing that will change is the schedule and the freedom that they give us in Bruin Block.

I think this new schedule is substantially better than this school years schedule. However, I feel like it COULD be even better! No bruin block in my opinion is the best resolution to this problem! #nobruinblock!