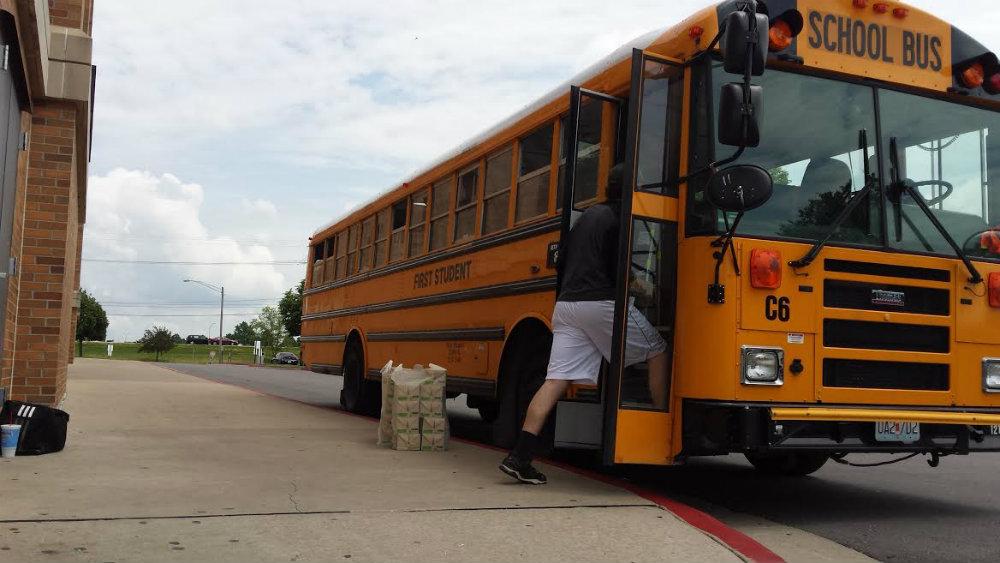 May 27, Eric Kuse, Junior, boards the bus after leaving early third hour. The baseball team heads to Rolla for the first game of sectionals.

Quizzes, notes, projects and homework are all things hundreds of Rock Bridge athletes and club members miss because of tournaments and away games. These absences leave teachers in a frenzy to get their students caught up after missing half or even a full day of school and adds extra pressure on those missing class to turn in assignments and understand the course material they’ve yet to see.

Sophomore Becca Wells is a part of RBHS’ debate team and often misses classes on Fridays because of the two or three hour bus rides necessary in order to reach a tournament, which is generally a two day affair over the course of Friday and Saturday. Wells finds leaving school early to be a nuisance but has managed to combat missing classes by talking to her teachers and classmates ahead of time.

“I usually try to talk to the teachers [whose] classes I’ll be missing beforehand to see if there is anyway I can get assignments early. If not, I will have a friend in the class text me the assignment right after that class gets out to have as much time to do it as possible,” Wells said. “There’s really no time to do homework at a tournaments, but I try to use bus rides to get some things done. Otherwise, I just know I won’t be sleeping a lot Sunday or Monday night and will be doing a lot of catching up on those days.”

Spanish 2 and 4 teacher Eva Vasquez also deals with the problems that athletic and club related absences present and, like many other RBHS teachers, has come up with a way to make sure her students come back without late penalties and are in a position to learn.

“Students missing class for tournaments or club meetings are responsible for turning in work due that day and for getting any work or assignments that will be due upon their return,” Vasquez said. “Asking for assignments should not be done at the last minute. If there is a test, I rarely let a student go to the club meeting until they are done with their test.

For many athletes and club members, it can be difficult getting back into the swing of things with two hour practices taking  much of their time every day after school, leading to a constant game of catch-up. With the 4:05 p.m. release time being enacted in the 2013-14 school year students including junior tennis player Tess Lovig have been scrambling to better manage their time.

“There is definitely a more rushed feeling [than my freshman year] throughout the day,” Lovig said. “I feel left with a lot less time to get done with homework and projects.”

And with most schools in the state having an end time between 2:30 and 3:00 p.m., RBHS Athletic Director David Egan has noticed that RBHS athletes and coaches have become adjusted to missing an extra hour of school since the 2013-14 year to reach their away games and tournaments.

“Say for example we are going to Kansas City for a game, we’re still going to leave at the same time,” Egan said. “And so really what the difference is that in 2012-13 if we had to leave at 2 o’clock well that meant we would be leaving during the middle of fourth hour. Now, we would be leaving in the middle of third hour, so there is a bigger loss in instructional time.”

Junior wrestler Josiah Kline, like Lovig, misses around one day of school a week during the wrestling season because of away duals and tournaments, which makes it exponentially harder to stay on top of his schoolwork.

“Generally, I have to prioritize my time better and make sure I’m getting my work done and turned in,” Kline said. “It makes it really stressful and harder on me to keep my grades up, and can have an effect on my wrestling. I’ll be tired the day after getting back from a dual because when I get home around 10, I have to spend a couple hours on homework and am lucky to fall asleep by midnight.”

Wells shares Kline’s struggles and says she returns to classes feeling out of the loop, unsure what to do next in order to be on the same page as much of her classmates.

“Some classes seem relatively easy to catch up in,” Wells said. “But in my harder classes like French and pre-calc it seems like they’ve done a lot while I’ve been gone and I’m not sure how to catch up.”

However, while Vasquez has noticed some students coming back confused, there has been a concerted effort by many RBHS students to get back to class and pick up where they left off. “ I have been lucky this year because the majority of my students ask for work prior to their absence,” Vazquez said. “And will drop by or email me with questions upon their return.”

Even with the addition of online activities and reviews coupled with tutors eager to aid athletes and club members alike, students like Lovig still don’t feel like they’re getting all the information they need.

“During season, I get very lost while doing school work, sometimes I’ll miss three days of the same class in a row and that really throw me off,” Lovig said. “And I have no idea what some of my teachers are talking about. Most of them find the time to catch me up, but some don’t really care that much and I’ll have to rely on classmates to help me.”

Apps of the Week: Hay Day, BuzzFeed and Dreamdays