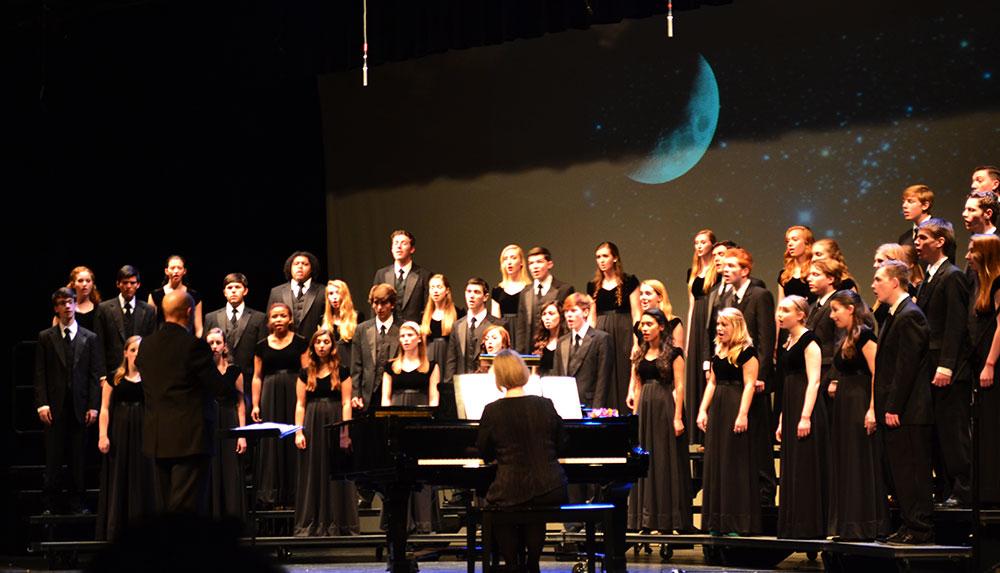 Lights dimmed in the Performing Arts Center Thursday, May 14 as Mike Pierson, choir director, took the stage. The audience roared with applause as a small smile managed its way onto Pierson’s face and remained there for the entire time he introduced the show, called “Dreams, Visions and Aspirations.”

After he finished, he went offstage as the first choir emerged, marking the beginning of the final choir concert.

The concert opened with “Pure Imagination,” a song from the movie “Charlie and the Chocolate Factory,” performed together by the Women’s Chorus and the Men’s Chorus choir together.

Janet Mathews was the accompanist for this piece and also for most of the songs performed that night. Following the piece came a performance by the Southside Singers, the freshmen choir, singing “Fair Phyllis I Saw.”

Freshman Erin Kravchick, who is a part of the Southside Singers, enjoyed the concert as a whole and said she felt prepared going into it.

“I felt pretty prepared because Mr. Pierson goes over everything, like, three times before we [do] it,” Kravchick said. “The day before, in the PAC we [went] over where we were going and our songs so many times.”

Kravchick was not the only one who felt ready. Pierson did as well, believing his thoroughness and the hard work of his students contributed to the feeling.

“We’ve put in the work. We’ve done what we needed to do to get ready for it,” Pierson said. “We’ve had good rehearsals for all the choirs. AP testing with some missing students hurt us a little bit, but in general we were in good shape.”

The Women’s Chorus came back on stage after the Southside Singers, with sophomore Liz Koopman introducing their next piece “A Midsummer Night’s Dream” by reciting lines from the play of the same name. Men’s Chorus immediately followed, performing “Ezekiel Saw de Wheel.”

Concert Choir made its first appearance of the night after Men’s Chorus, singing “Ballade to the Moon.” The Southside Singers reappeared afterward, introducing their next piece “May There Always Be Sunshine” with a narration by freshman Andrea Baker. Baker told a story about a Russian boy who had written a poem, and spoke the poem this boy wrote prior to the song.

Concert Choir walked on stage yet again after the Southside Singers concluded, singing “Si tu Suenas,” a Spanish song discussing hope. After the singers finished, Men’s Chorus reappeared on the scene, covering “Some Nights,” a song by the band Fun. Two singers from the choir, Senior Sean Doherty and sophomore Preston Johnson, had a solo during the performance. Senior Jared Myers also assisted in the accompaniment by playing snare drum.

Men’s Chorus receded from the spotlight momentarily as Women’s Chorus spilled around the audience, performing “A Dream is a Wish Your Heart Makes” merged with “Once Upon a Dream,” songs from the Disney movies Cinderella and Sleeping Beauty, respectively. As the choir sang, seniors Brice LaFond and Leslie Walker danced, enhancing the performance.

Men’s Chorus returned after Women’s Chorus finished, singing “Umi Sono Ai,” a Japanese song about the love of the sea. Three singers from the choir, sophomores Preston Johnson, Ethan Operle and Landon Puckett, broke away from the main group during the song for their group solo.

The Southside Singers made their final appearance alone by performing “City Called Heaven,” a traditional gospel song. The performance featured three separate solos, done by freshmen Mamay Si, Sam Duncan and Anna Inslee respectively. Women’s Chorus came back to the spotlight, performing “A Universal Dream.” Myers assisted with the accompaniment again on the djembe, a type of drum originating from West Africa.

For the last group performance, Concert Choir took the stage and sang “John, the Revelator,” another traditional gospel song, and Steve Mathews, band director, took over on the piano.

Kyleigh Venn, senior and member of Concert and Women’s Choir, found this piece the most difficult for her.

“It was a gospel piece, so it was really upbeat and [had] many tempo changes, we had clapping and tons of rhythm,” Venn said. “We had so many different parts and [had to sing] these crazy sentence structures. It was overwhelming at times, but it was manageable once we got the hang of it.”

Before the closing song, Pierson came on stage, full of smiles. He thanked everyone for their attendance and introduced the final piece, “The Awakening,” sung by all choirs and even alumni of RBHS. As is the case for most final choir concerts, alumni students were invited to come on stage and sing this song they performed themselves while attending the school.

Kravchick considered this song the most difficult for her, as her notes resembled those of others with a different singing range, making it tough for her to stay on key. Their choir did not work on the song as much as their individual songs, yet she still enjoyed it the most.

“‘The Awakening’ was so cool, as you had all the choirs and then you had the alumni, which was so awesome,” Kravchick said. “That last note was just great, because we were singing it and it was already intense and it was like, ‘Nope, we’re gonna go [louder] some more.’”

Venn feels the same way, but for different reasons, as it felt like a tribute to herself and her fellow singers.

“A lot of us were bawling before we could even begin the song just because it was our favorite to sing,” Venn said. “It was by far the easiest one to learn, because we sang it two years ago and it was just one of those things we didn’t forget so we picked up on it.”

As the concert came to a close, it also symbolized the end of choir for the school year. Pierson feels this concert represented a great year for the choir department.

“If you look at festivals and competitions we’ve done very well, whether it’s show choir or traditional choir,” Pierson said. “In state large ensemble [Missouri State High Schools Activities Association Music Festival state large ensemble], both the traditional choirs and the show choirs placed very highly. We’ve sung a lot of fun and challenging music and played it well. We had four All-Staters, multiple students in All-District choir, lots of success at district and state music festivals, so it’s been a successful year.”

Missed the choir concert? Listen to it here.