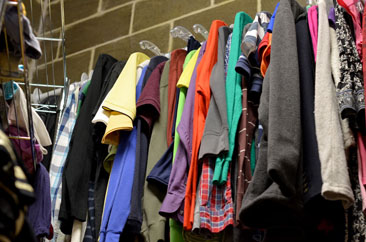 Sophomore Robert Shang sits in the EEE room, surrounded by friends, a binder open in front of him.  As he works on homework, he fiddles with zip of his sweater, worn over a plain T-shirt and shorts, all of which he purchased recently.  Looking around at his friends, they all donn similar attire. Their style varies- one boy wears jeans, another student wear khakis, and a girl a few chairs away has on a dress. Despite these fashion differences,  all their clothes are relatively clean, and more importantly, relatively new.

A quick glance around Rock Bridge, and it seems most, if not all the students at school purchase new, and nice, clothes with ease and regularity.

“The general stereotype at Rock Bridge is the students are more upper-class. My first thought, there probably aren’t a lot of students who need it [financial aid].” Shang said. “But in reality, there is probably a good percent that need help.”

A deeper look at the school shows Shang is right; many students do need aid. Over the years, the faculty noticed several students showed up to school, wearing the same clothes every day. The students rarely spoke up, but the clothes were thin and worn. Slowly, it became apparent a large portion of students were living in poverty and were in need of aid. Seeing this, the Multicultural Committee, headed by Lisa Nieuwenhuizen, sketched together the idea for a Bruin Clothes Closet. The closet started last spring, head counselor Betsy Jones said, and by the beginning of this year, the closet was completely organized and running.

When planning the closest, the administration made a conscious decision to make the Bruin closet different from others of its nature. Frayed jeans, tattered t-shirts, and worn sweaters are the clothes one most often finds in clothes closets. They are thrown into dusty corners of rooms and stay there, long forgotten,  before they are eventually dragged out, tossed into bags and carted off.

These closets, meant to be places where people in financial distress can receive clothes for free, often become a place old  and badly used garments, in varying states of shabbiness, find new homes. Out of necessity, people are forced to choose from amongst several ragged pieces, in hopes that the holes in their attire will not draw too much attention from their peers.

“We don’t want clothes that are worn out, that are ripped, that are dirty. We are really asking for quality donations,” Jones said.  “A lot of our stuff is new. A lot of our stuff is somebody bought something, it sat in their closet and they never wore it, or younger kids who outgrow things quickly and don’t have time to wear them out. We are pretty picky about the quality of the merchandise we are accepting, because we don’t want to offer items that look used, we want them to appear to be new.”

The Bruin Closet, housed in the basement by the FACS rooms, is a place where students can come to find clothes for any event, whether it be garments for daily wear, prom, or homecoming. In addition to shirts and pants, the closet also hold shoes, purses, and belts, and currently there are hundreds of clothes in the closet.

While the closet carries a vast amount of clothes, right now it is only accepting donations from administration and faculty.  As a counselor, Jones said, she noticed many high schools students feel too proud to come forward and admit they need help.

By restricting the closet to faculty-only donations, students utilizing the closet are protected from unwanted attention and embarrassment.

“When you get into the psyche of someone who has been living in generational poverty, so generation after generation, living in poverty, there is a pride thing, and so we haven’t opened it [the Bruin closet] up to donations [from students],” Jones said. “Confidentiality is one of the keys to this. We want to make sure we are maintaining grace and dignity to all our students.”

Because of its secretive nature, many students have not heard of the Bruin closet. However, the students who do know about it,  have a different opinion from Jones and the other faculty. Opening the closet up to donations from students, Shang said, would be beneficial.

“I think students should be able to donate as well. I mean, I get the purpose of keeping it secret,” Shang said. “But I think even if students donate, since they donate directly to the closet, they won’t know who get the clothes and the students who wear the clothes won’t know who give it.”

Regardless of who donates to the closet, finding students has not been easy. The closet mainly depends on referrals from assistant principals,  teachers, and counselors to find students in need of help. Many high schools students are hesitant to step forward, despite needing aid.

This hesitance goes far beyond the Bruin Closet. Many times, chemistry teacher Gregory Kirchhoffer said, students do not take AP tests because they can not afford to. While the school has funds that can help, students feel uncomfortable discussing their situation with others and do not step forward. Eventually, and often times after the AP test passes, a few students confide in teachers. This reluctance to speak up about financial distress, Kirchoffer said, is because there is a social stigma that stops students from admitting they can not afford things.

“Absolutely, there are a lot of students who need financial aid at this school. To help students, teachers have to know and that’s the hard part. It’s hard for us to know. Especially if you [students] are in that situation, you [students] might want to try persuade people that you’re not,” Kirchhoffer said. “Especially at a place like this[Rock Bridge], there’s a pretty wide range of students. There are students way up at the high end of financial ability, and way down on the low end. If you’re on the low end you think everyone is on the high end and then you don’t want to say anything.”

“People have this image that Rock Bridge is the rich school. But we have rich kids and we have poor kids,” Kirchoffer said. “And maybe we have more rich kids than other places, which makes it harder for the kids who aren’t, because they look around, and they don’t have all the things others do. But they can’t say anything because all their friends, all their classmate are able to afford things, and just expect them to [be able to afford things].”

Despite the stigma surrounding poverty and the problems finding students, the Bruin Closet has been a success.  The school plans to continue with the closet, Jones said, and hopes as time moves on, students will feel more comfortable coming forward.

“We started last spring, but really got it up and running and organized this year, so it hasn’t been that long. There have been quite a few students who have benefited from it,” Jones said. “We have so much to offer, and those who have gotten things from the closet have really appreciated it.”

Humera Lodhi. A name that will go down in history. And why wouldn’t it? Her bubbling personality and infectious laugh can brighten up even the most dismal room, and her vibrant smile can cheer anyone up. She spends most of her time procrastinating homework by watching random YouTube videos or scrolling through Reddit, just like any other teenager. She also has an insane addiction to anything and everything related to Harry Potter. But Humera is much more than your average teenager. She hopes to grow up to change the world and raise awareness of social issues with her writing and her passion for helping others. All in all, Humera is the total package. Plus she makes delicious cookies. (bio by Afsah Khan)