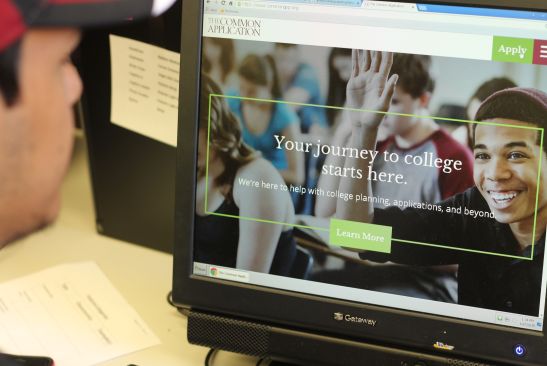 Senior Marco Rea browses through the Common Application, a universal application for most colleges.

Is America’s history color blind? The answer is no because of the constant discrimination against minorities in its history. Why are people against affirmative action, which are policies and scholarships that benefit those who are discriminated against, and believe admissions offices need to be “color blind” in their admittance of students? The true reason is that they believe racism is no longer an issue in society. But this policy of “color blindness” does not work for many reasons, especially because discrimination against African Americans still exists.

According to The Huffington Post, black literacy rates are lower and black people populate the poorer parts of cities. Regardless of the scholarships they’re presented, the admission rates will always be higher for the majority — white students.
Three times the amount of African Americans live in poverty, in comparison to their fellow white citizens says finaid.com. They also say black students attend college at a rate 10 percent lower than their white counterparts.

How is the near half-century old concept of affirmative action going to harm the success of white students? And if so, why haven’t these harmful effects been seen yet?
Affirmative action is a product of the ‘60s movement to provide equality to minorities and women in the workplace and in education.

In 1961, President Kennedy used the term when signing an executive order that directed government contractors to take “affirmative action to ensure that applicants are employed, and that employees are treated during employment without regard to race, creed, color, or national origin.” Even with Kennedy’s actions, the gap between white high school graduates who attend college and minority graduates is still large.

One of the main reasons for the existence of affirmative action was to acknowledge all the wrongdoings against minorities that have been committed in the past and that were detrimental to their growth and progress in society.

The point people don’t understand about affirmative action is that it wasn’t created to help black people push ahead, but to help level the playing field for them. Even after the scholarships and money created to help African Americans and other minorities, the white majority still lead all of the educational and quality of life statistics.

Until these statistics don’t show such a gap between the minority and majority, and until the minorities of America aren’t mostly living below the poverty line, affirmative action is necessary to help minorities persevere against the odds stacked up against them.

So to the students going to college, remember that affirmative action gives opportunities to minorities. It doesn’t take away from the Caucasian majority.