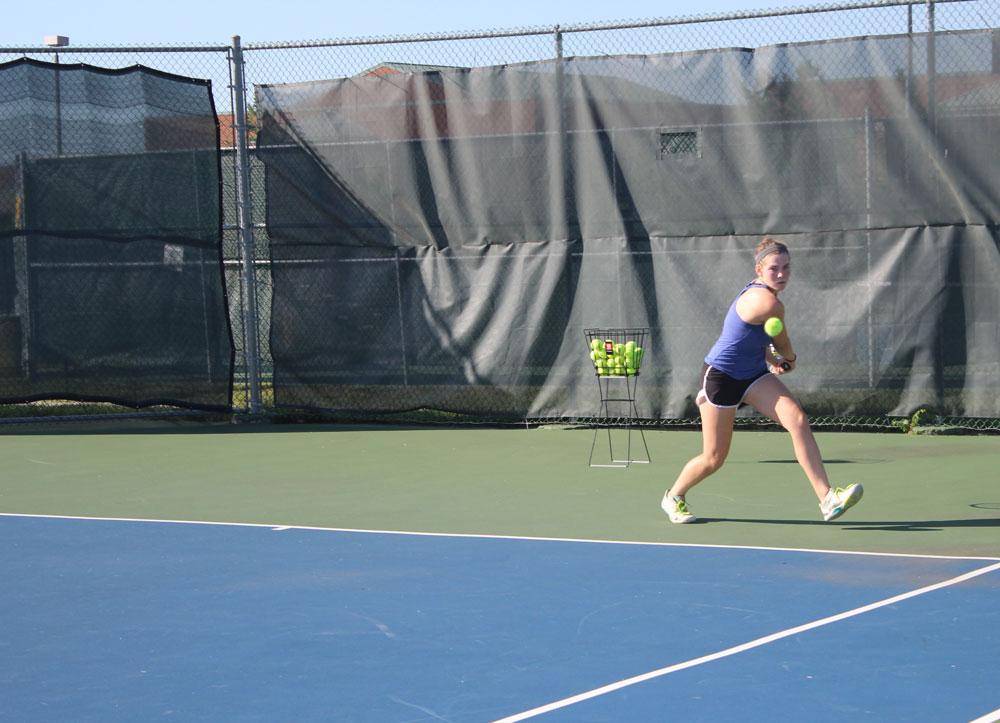 A state title isn’t quite news for the RBHS girls’ tennis team, as they have won four of state titles in last six years. However, the team’s performance at the 2015 MSHSAA Class 2 Tennis State Championship only solidified the bruins success when they captured the title with a 5-0 victory in finals.

“In finals we had a 2-0 lead in doubles matches…” Head coach Ben Loeb said. “What virtually clinched the team title was a hard fought win at number two in doubles, 9-7 by Tess Lovig and Eleanor Fay to butt us up 3-0.”

Two duos supplied the team with an early lead. Faith Wright and Katherine Dudley won at number two in doubles and then Hannah Pohl and Ronni Farid won at number three.

“It was very stressful before the match, knowing that we need the win. Because they put my singles match on before Eleanor and Tess beat their opponents in doubles, I was unsure how many matches we needed.” senior Ronni Farid said. “We ended up winning 5-0 which is something I’m really proud of; you don’t see a 5-0 win in the state finals very often.”

Even with a history of success, the victory did not come with ease from the opposing teams.

“In the finals we played Notre Dame De Sion, which was a very intense match. They are a very headstrong team with good competitive spirit which made the match fun to play and left everyone feeling good after we won.” senior Tess Lovig said. “Each match we played was very competitive, although the overall score may not have shown that.”

On the two days following the team competition, individual and doubles matches took place. RBHS continued to do well with both of the doubles teams advancing to semi-finals. Once again Wright and Dudley and Farid and Pohl proved fierce competitors by winning second and fourth in state, respectively. In singles Lovig advanced to the consolation final and won sixth in state.

According to Loeb, the Wright and Dudley victory came from behind, as they were down 5-2 in the second, but they rallied to win the next five games. Lovig’s first victory of singles was close, and then in her last round she had to go up against Fay, her partner from the team portion of the championship. Lovig pulled through to defeat her teammate and to win sixth overall for individuals at state.

Farid credits the team’s constant effort in practice as what has pushed them to succeed at state. But both Lovig and Farid also attribute their triumphs to their coaches and teammates.

“I had an amazing season with an amazing team.” Lovig said. “I am so lucky to have been surrounded by amazing coaches and girls who work so hard to accomplish amazing things.”

Throwback Thursday: The Shining stands as a true classic