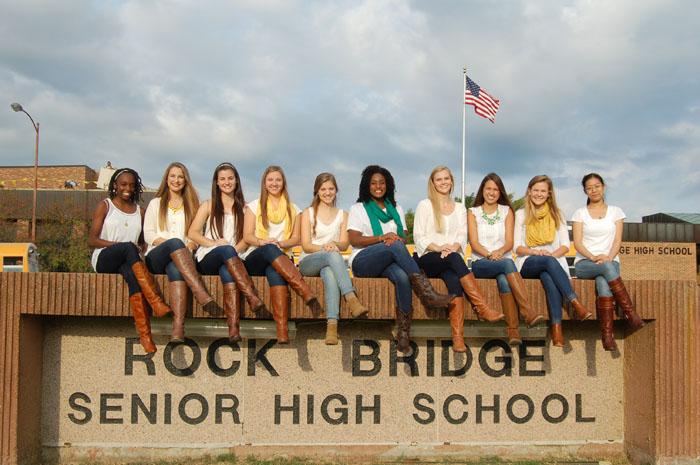 This year Homecoming isn’t just about the glitz and dresses. Instead, each queen candidate chose a charity to support throughout the Homecoming week. Once the queen is announced, her chosen charity will receive 50 percent of all money raised by Student Council during all the Homecoming fundraisers.

“We decided to do this to give back to the community. Hickman does it very well and makes a lot of money for charity, so we thought it would be good to start that,” senior Student Council President Kelly McDonald said. “Every year we will try to add a little more to it. But right now I think it is good that we are doing something for our community. We also did this for Courtwarming last year but we are trying to let people know more this year.”

Student Council sponsor Kelley Wittenborn agrees with McDonald that the change is a positive one that needed to be made.

“This year we decided we really wanted to change up how Homecoming worked: from the assembly, to spirit week, to the dance,” Wittenborn said. “We just wanted everything to have a fresh perspective and lots of new ideas. Since Homecoming is always such a strong money-maker for Stuco, the members decided they really wanted to give back and do something positive with at least part of the proceeds.”

Instead of focusing on superficial things like looks, Student Council wanted to focus on boosting the community this year, just as Hickman High School has done across town for years.

“Hickman usually has each queen sponsor a charity, so we decided to borrow their great idea and apply it to our homecoming process as well. That way we also avoiding selecting just one charity to support, and hopefully it made queens and their voters more aware of these great organizations that help out around the community,” Wittenborn said. “The winning queen candidate will be announced tomorrow night at the dance, and her chose charity will receive 50% of the proceeds from all Homecoming Activities.”]
Senior Faramola Shonekan, one of the Homecoming queen candidates, has taken to the change and decided to support City of Refuge. The organization supports refugees that come to Columbia and need help starting their new lives. The topic is close to Shonekan’s heart, as her family originally came to Columbia as refugees.
“I chose City of Refuge because my parents are from Nigeria and arrived here 20 years ago. They often tell my siblings and I about how hard it was for them as immigrants who had just arrived with nothing in their pockets, and how they had to rely on the kindness of their friends to survive,” Shonekan said. “I actually intern for City of Refuge because I wanted to be that person who shows kindness to immigrants that struggled like my parents had.”
Shonekan is excited that Student Council has chosen to take this step and that adding charities to the festivities takes it to a new level.
“I think Student Council is brilliant for coming up with this idea,” Shonekan said. “It gives the student body an idea of what each candidate is like and what she cares about. Also it’s a great way to build awareness and give back to our community.
McDonald is also a Homecoming queen candidate with a charity that means a lot to her.
“I chose Pascal Pals, which is a charity that gives back to families when their kids are in the hospitals,” McDonald said. “I chose this because my brother’s girlfriend Kathleen Oglesby was in a really bad accident and Pascal Pals helped her and her family out by giving them money and setting up fundraisers for her. So it would be nice to give back to something that means so much to me.”
Seeing all of this positivity assures Wittenborn that Student Council made the right choice. She believes that this year has been the most joyful and spirited Homecoming since she has taught here.
“I’ve worked at RBHS for five years now and I’ve never seen so much involvement with Homecoming week. We received lots of positive feedback from students and staff about the assembly, the movie on the field, the strong push for philanthropy and charity donations, and overall just a really positive increase in school spirit throughout the school,” Wittenborn said. “We understand that students are so busy with their own lives and activities, but it has made RBHS such a positive place to be a part of the past few weeks with all the support that students have been giving one another and the involvement that has been happening.”
While Shonekan isn’t holding out to be Homecoming queen, she is excited at the possibility of her organization winning half of all the Homecoming proceeds. Being a part of the organization sees all the ways that the money could make a difference.
“[The money] might be used to buy clothing and stuff for big refuge families. For my internship I do anything that they need me to do,” Shonekan said. “I’ve taken a Jordanian woman to the eye doctor, I’ve gotten a bike for a Congolese named Felix so that he could get to work, and I’ve helped sort out clothes donated to the City of Refuge. I pretty much help with anything I can.”
By Abby Kempf
previous post