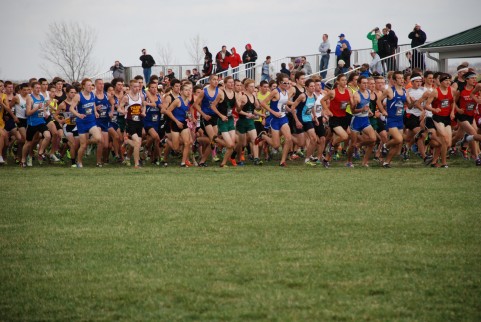 A trip to the state meet might seem like a routine trip for the RBHS cross country team, but that doesn’t take away from the excitement of great races. This resulted in the boys finishing fourth and the girls finishing 14th respectively. It would be back to back trophies for the boys, with senior Will Rumpf coming in 12th and junior Adam Sandstedt in 19th. On the girls side, junior Rebecca Rubinstein would lead the Bruins in 57th with senior Emily Harl 18 spots behind in 75th.

The boys saw fourth as a good ending to a tough season filled with injury, leaving them elated with their finish.

“We had a great season this year,” Rumpf said. “I felt like in some aspects of the race we could have performed better, and I know that we wanted to do that, but we are still extremely happy with our performance at the meet.”

For Rumpf it would his first time having the distinction of being an All-State with Adam Sandstedt who would be there for his second time in a row. Their combined performances would set the tone for the rest of the team but also for teams in the years to come.

“I can’t say enough how happy I am that I was able to be an All-State runner along with Adam,” Rumpf said. “and I think that we were able to help put the team in a position to win. [Head Coach] Blackburn also wanted us to know that we were setting the bar for teams in the future and that feels really amazing.”

For the girls team the 14th place finish would come as somewhat of a letdown but not a loss, as Harl felt that the team still worked their hearts out.

“Going into state, we knew we were fully capable of coming in the top 10,” Harl said. “but team wise, the state meet wasn’t the best. We had individuals that stepped up where we needed them to, but to have a great team score, everyone needs to step at the same time. We should have done a better job of packing together. The team still performed extremely well considering our circumstances.”

Though the end of the season comes as both a happy and sad moment, Harl feels that the memories made on the team will never leave her no matter the finish.

“Freshman year I came in intimidated and a little uncertain about the whole running thing,” Harl said. “but with this sport’s supportive environment, four years later, I have turned into a leader and I am so blessed to be able to say that this team helped me do that.”

Being on the cross country team, it was very interesting to read a story on the sport. It was also cool to see quotes from people I personally know just to imagine what they would say. It was good that many of the stats were in the beginning so people could quickly take away how the team did. The quotes used also helped to amplify the story and back up the text.

I have a lot of friends who ran cross country this year, but I never got the chance to learn much about it and their achievements. After reading this, I can feel the fun and encouragement that comes from being on the team. The story was focused on the team’s recent achievements, but I still took away a positive feeling about cross country. The story even makes me consider joining cross country because of the environment the team has according to the article.