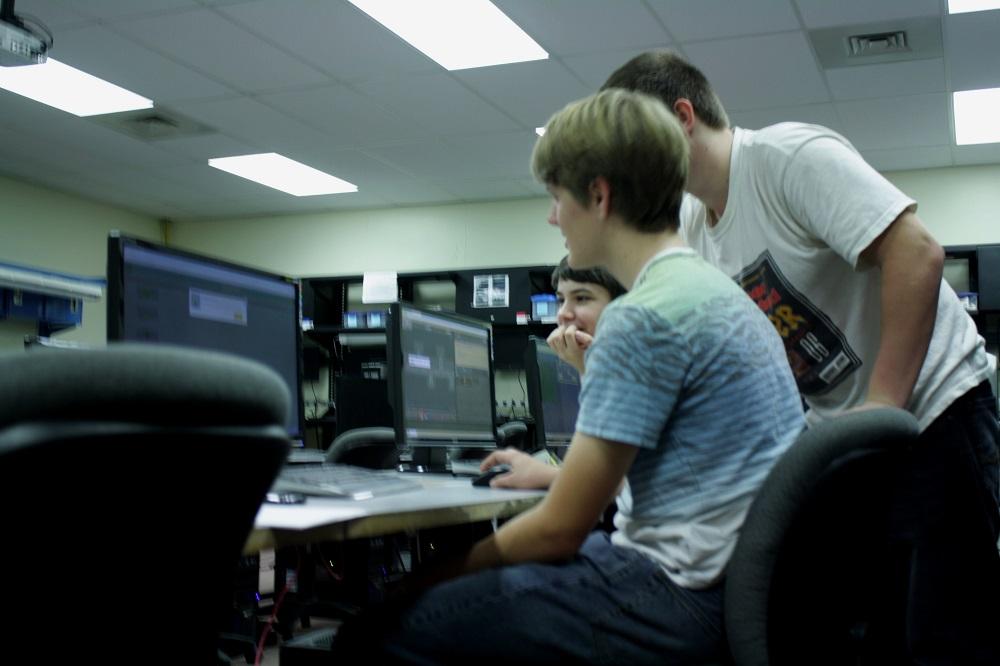 Every day around the world, more and more people become acquainted with technology through numerous channels, each one created by a variety of people. Freshman Christian Reall-Huharty made such a path at RBHS through his new club Intech inc. It held its first meeting Dec. 9 after school in the Columbia Area Career Center (CACC).

“We’re a technologically-oriented club, and it’s supposed to emulate a business environment, where we have a CEO — me — and my co-Executive Officer, my [co-leader],” Reall-Huharty said. “There will be little groups working on different projects, with a Project Manager at the head. They are each in charge of a number of workers and then they report to us, in order to aim for the larger goal.”

Intech inc. is focusing on teaching its members facets of computer science, as Reall-Huharty anticipates that future members will have little experience with the field. He believes it is best to ignore the business side for now, but as the club grows, he hopes to introduce the latter in the projects he plans to have.

“We’re working together to create projects that at some point, we could commercialize,” Reall-Huharty said. “We’re aiming to create products that we could release to the public for actual, legitimate use, but we’re nowhere near that right now.”

While he would love to, Reall-Huharty cannot set developing products as the club’s current goal because of its infancy. There are an insufficient number of members for him to initiate projects, and finds cultivating Intech inc. to be a struggle.

“We’re having trouble getting our message out there,” Reall-Huharty said. “We put up flyers on the wall, but not enough people are hanging them up. Mostly, the word is spread orally.”

The birth of the club coincided with a global movement called the Hour of Code, which aims to introduce computer science to people of all ages. While a person can host an Hour of Code at anytime, the movement’s goal is for students to try programming during the week of Dec. 7 – 13, which is also Computer Science Education Week. Sensing a perfect timing, Reall-Huharty chose to use this week as an opportunity to advertise his new club.

“In order to potentially get some people to come [to the club], we actually did the Hour of Code program in [Introduction to Computer Science], and those that were interested could join in,” Reall-Huharty said. “They enjoyed it, but since we did it on the day of, they probably didn’t have the opportunity to arrange rides if they were wanting to do so.”

“People think of programming as something alien, as something just weird geeks in little rooms do,” Hopkins said. “This is trying to emphasize that people of all walks of life and occupations need to know something about coding.”

Those who run the Hour of Code program think similarly to Hopkins, wanting to expose a large and diverse group of people to the realm of computer science. In particular, the event hopes to cultivate student interest and grow the field, as the amount of computer science courses have decreased by 17 percent since 2005, with the number of Advanced Placement (AP) Computer Science courses also suffering a decrease of 33 percent.

[quote cite=”David Hopkins, computer science teacher”]“People think of programming as something alien, as something just weird geeks in little rooms do. This is trying to emphasize that people of all walks of life and occupations need to know something about coding.”[/quote]

However, the U.S. Bureau of Labor Statistics predicts that the demand for software developers will grow 22 percent from 2012 to 2022, attributing it to the interest in the knowledge of computer science. The Hour of Code hopes to meet this demand through its program, stressing that students must have the chance to try the field. Reall-Huharty aspires to provide one of these chances for RBHS students.

“Technology is the future, and it’s here,” Reall-Huharty said. “We’re just trying to go that way, and so we hope to accept any person who’s willing to learn programming.”

Did you participate in the Hour of Code?