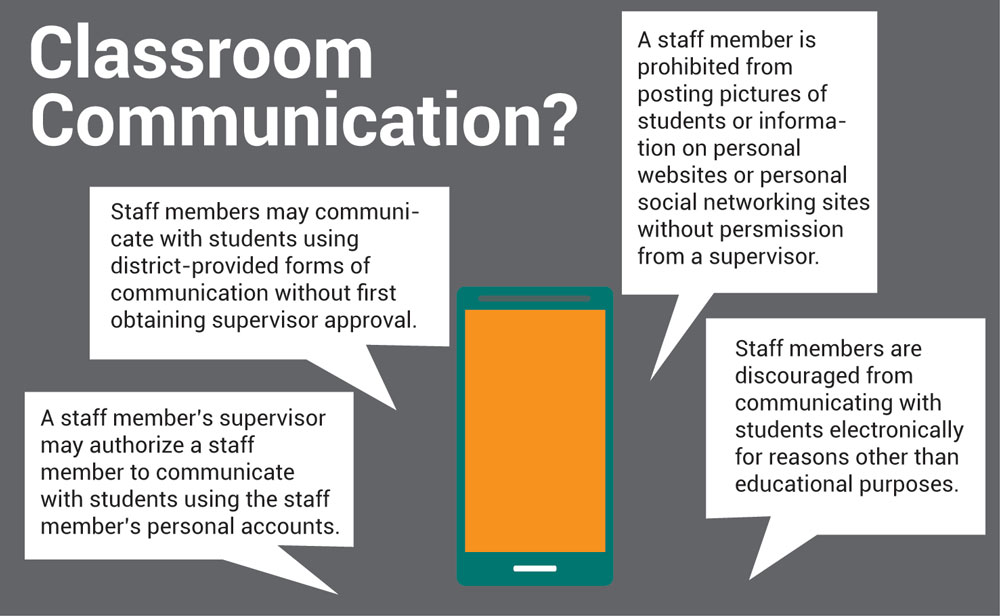 At a recent staff meeting, Principal Jennifer Rukstad and guidance counselor Betsy Jones spoke with teachers and school personnel about the district’s policy for electronic communication between staff and students. While the policy has been in place, Rukstad said the district saw the need to emphasize it to CPS staff.

“I would guess that [the policy talk] was spurred by [human resources] issues. The district realized that maybe not all staff members understood the policy,” Rukstad said. “Mrs. Jones went to this training with the district’s attorney where they focused specifically on this policy and brought it back and we became very aware that we didn’t–that I certainly didn’t know the policy in a practical stance.”

The policy in question is located on the Columbia Public Schools website under the Policies and Regulations tab. Titled Staff/Student Relations, the policy file outlines a range of electronic behaviors that the district classifies as inappropriate.

“[It’s] a long policy all about student-staff relations, but what we’re specifically looking at is digital. So texting, cell phone numbers, Facebook, Snapchat; all of that stuff,” Rukstad said. “The specifics of the policy are all right there. The policy is as is, but then you have interpretation. So the attorneys go in and help us understand, ‘How is this interpreted; how does this come out in practice.’”

Some of the district’s expectations are that staff should use district-provided devices or accounts when communicating with students. If district-provided means of communications are not available, staff members should seek approval from their supervisor to use their personal contact information.  While these regulations are already in place, some teachers like Neal Blackburn, who is also the Cross Country and Track and Field coach, do distribute their personal phone numbers to their students and use social media to communicate.

“My athletes do have my number, and most of the time any communication is usually in season. Usually, there is very little communication out of season,” Blackburn said. “If there is a way to do a blanket contact where everybody is gonna get in on that, like if it is [RBHS] Cross Country or [RBHS] Track and Field, like a Twitter account, I can push things out that way.”

The policy’s strict language states that the district discourages staff members from contacting their students for non-educational reasons. This could pose some challenges for teachers like Blackburn who double as coaches for athletic teams. Senior Bria Trent dances with the Bruin Girls and said she would be in favor of greater electronic communication leeway for teachers who are also coaches.

“I think that if there’s gonna be a rule that teachers can’t talk to their students outside of the classroom online, there should be an exception for coaches, because I know a lot of times they have to do scheduling stuff online,” Trent said.

Although the policy introduces some inconveniences into his duties as a coach, Blackburn still realizes why the policy is in place.

“I can absolutely see the importance and significance of having a policy like that. It is also just difficult to kinda communicate certain things, especially with the amount of kids you have involved in the different activities,” Blackburn said. “Sometimes, it is easier just to be able to communicate in that particular way. You kinda wonder what to do to keep it so that fine line exists. You want to make sure that you use it for its intended purpose and you also understand why it is there to begin with.”

Despite students and teachers’ varying opinions on how communication should function, Rukstad said the purpose of putting the issue on the meeting’s agenda was not to ignite debate. Individual schools play no part in the formulation of such policies, she said, and any changes would undergo a lengthy process before materializing. For now, she is just trying to make sure people are aware of where the line should be.

“I don’t have an opinion about the policy. I just have to make sure everybody understands it,” Rukstad said. “There was nothing [in the policy] that I didn’t expect, but I don’t think that teachers or staff in general always consider where the line is with student-staff relations, especially in electronics. We pride ourselves in good relations with students, but we have to be careful that we’re not crossing that line, especially outside of the school day, [but] you can’t follow the law if you don’t know the law.”

What do you think should be the policy for communication between teachers and students?