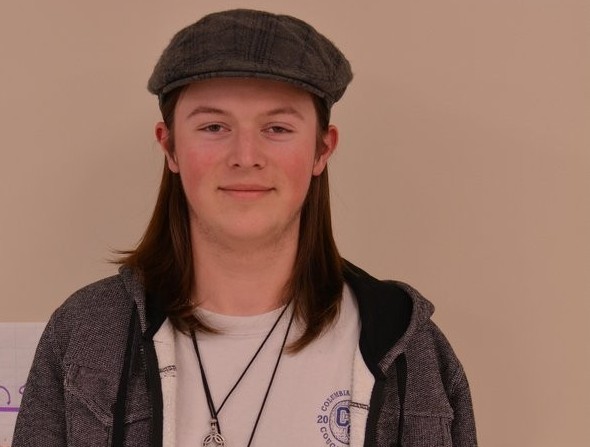 Seeing sophomore Henry Utley in his steel, butted ring chain mail can make anyone question whether he is at school or a cosplay event. He wears the flexible armor with a sense of pride as a representation of his ideology. More than just an aesthetic preference, the chain mail represents Utley’s identity as a Germanic pagan.

Paganism, as Utley puts it, is a set of mutually dependent outlooks on the world rather than one distinct religion. The spirituality has so much depth and complexity that its followers often interpret its rituals and beliefs in many different ways. Despite the many variations of understanding, Utley finds that he fits in with the main one: honor, which is acquired through doing what is right. He says there is no established set of rules for how a Germanic pagan or someone of Norse ancestry must act, therefore disregarding the practice as a religion.

“In my opinion, a religion is used to control people, but a spirituality is just something you actively look deeper into,” Utley said. “Primarily, it’s just going through your daily life honoring your ancestors and gods with your deeds. There’s not really restrictions. It’s just kind of the people who follow it have a common feeling of honor and being honorable.”

Utley describes his definition of honor as simply as doing what is right. He recalled the Massacre of Verden in 782 during which Charlemagne, the first Holy Roman Emperor, captured approximately 4,500 Saxons from modern-day Germany. He ordered that they either convert to Christianity or die, and they all chose to die. Utley argues that Charlemagne spurred the Dark Ages, saying the title was just another name for the Viking Age, during which the Vikings terrorized Europe. He justifies the Vikings’ actions as honorable, because they didn’t cause terror out of cruelty and greed, but rather as retaliation toward threat to their culture and people.

Germanic pagans don’t pray or bow to a deity, Utley said, because to them asking for help when something is difficult is a sign of weakness. Utley feels like if someone else does something for him, it doesn’t have as much meaning. That’s also a reason he got into knifemaking, saying that if he were to buy a knife or sword from someone else, it wouldn’t have the same meaning as one he labored for hours on making himself.

Utley is already an avid blacksmith and has been for years. He currently works with a blacksmith in Moberly who has been making his own knives since the ‘70s. For Utley, there’s something about the primal interaction between him and the raw material that gives him a feeling like no other. He plans on moving on to making ornamental metalwork like wine racks, iron gates and railing. Other interests of his include making armor and swordsmithing, and he looks forward to the opportunity of meeting local swordsmiths, as well as one of his friend’s father who makes armor.

Before a couple of years ago, Utley didn’t associate himself with the spirituality, but he says he has learned a lot about it over the last year and still has a lot to discover. He shares his viewpoint with his close group of friends, whom he sees as brothers since he has no biological siblings. They refer to themselves as “heathens,” a term once used by Christians as derogatory toward non-religious people, but one Utley and his friends embrace.

One of Utley’s friends, sophomore Lindsey Johnston, finds his spirituality intriguing and an interesting conversation topic. She thinks his beliefs make him open, generous and a loyal friend.

“He’s a very mentally and morally strong person. Whenever he has something to say that might offend someone, he asks his friends for help to phrase it well so they don’t get offended,” Johnston said. “Henry is very conscious of other people’s emotions and can usually tell when you’re lying about if you’re doing okay.”

Likewise, Nick Lehmacher, who does not go to Rock Bridge but is a fellow heathen, admires Utley’s ambitious and gentle nature.

“There are slight things [Utley] and I may not agree on but 99 percent of the time we share the same opinion,” Lehmacher said about their shared beliefs. “There are some groups that we consider ‘new age’ that we don’t agree with. [Utley] and I try to be as folkish as possible. We share a deep understanding of our spirituality that is hard to put into words.”

Although they’ve only known each other for a year through Instagram, they talk almost daily and have found that their spiritual beliefs are nearly identical. In fact, Lehmacher refers to Utley by his Norse name, Halvar, and the two think of each other as brothers.

“I have a decent amount of heathen friends. None of them go to Rock Bridge, but I did find a group of heathens that was here in Columbia,” Utley said. “I was surprised to discover that there were heathens in the middle of Missouri.”

The group members call themselves the “kindred” and meet every Friday, where they gather around a fire and tell stories. Utley has only been to one gathering, but says he plans on going again, and that’s not the only thing in the heathen community that he has an interest in.

“A lot of heathens nowadays still do blacksmithing and battle reenactments. Battle reenactments aren’t just like fake swinging. You can actually hit people,” Utley said. “You get in steel armor and fight, and when you ‘die,’ you’re out of the fight. I haven’t done anything like that, but I plan to. I really want to, actually.”

Utley said heathens don’t run from trouble but embrace it as an opportunity to become stronger and wiser, whether that is hardship in life or a physical battle. He has only one fear, which is losing the people he cares about, and lives life with the idea that if he was just thrust into a battle, one of two possible outcomes would occur: death, or living and learning from the experience.

It’s obvious that pain and death don’t scare Utley, perhaps because of his compelling beliefs on the afterlife. According to Norse mythology, those who have earned honor through fighting in battles get chosen to go to Valhalla, their variation of heaven.

“I personally do desire a violent death, and that’s not out of typical Viking stereotypes. The warrior spirit is just part of me. Einherjar is the name of the people that are chosen by Odin to go to Valhalla, and you just have to get picked,” Utley said. “The spirituality isn’t wrapped up in battles and armor and fighting and killing people because you’re a stronger person or whatever. The violent death thing isn’t a desire for most people, but it is for me.”

The most likely situation in which Utley sees himself dying a violent death would be if someone were to rob his house, or a public shooting. He said he’s not afraid of somebody coming into the school and opening fire, because if that were to happen, he would try to save other people, even if that meant his own death.

“I believe in the ancestral spirituality of the Germanic people, and I have pride in that,” Utley said. “In everyday life, the goal is to set a good example of who the Germanic people are by honoring the ancestors. There are no rules for how to live life. Every individual is different and explores it in their own way.”

Hooves to my heart: once in a lifetime friendship

This story was interesting to read and informed me on a new religion and spirituality that I was not very aware of. I think it is cool that Rock Bridge is so diverse in its students and we are able to recognize all these people. For readers not having a lot of knowledge on the topic , it was a good way for people to gain a better understanding of the spirituality.