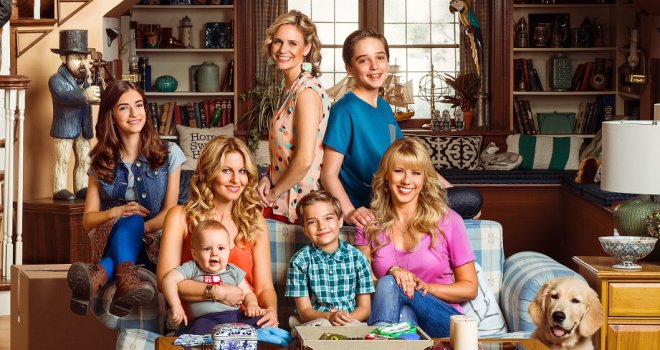 It’s been 21 years since the last episode aired, so of course there are more modern references like Donald Trump jokes, but, the classics that warm our hearts from the ‘90s sitcom are here to stay. You’ll just have to watch it to see which ones made a comeback.

One of the most exciting things from the first episode was seeing the Katsopolis twins all grown up. Nicky (Blake Tuomy-Wilhoit) and Alex (Dylan Tuomy-Wilhoit) were only 5-years-old when the show ended and had appeared in less than half of the episodes during their time on “Full House.” The now-college students aren’t exactly as accomplished as their parents Becky and Jesse, but they have their own charms.

The Olsen twins were unable to reprise their roles as the adorably, sassy Michelle Tanner. It was already common knowledge that they were not going to be on “Fuller House” due to scheduling conflicts, but they could have surprised everyone and make an appearance. The pilot episode, however, didn’t make Michelle’s absence unnoticed. The original cast threw some strong shade their way when it was mentioned that Michelle wasn’t there, even though everyone else was.

The show is set up much like “Full House,” D.J. is a widow and sets out to raise her three boys on her own when both her sister and best friend step up to help. I was worried it was going to be cheesy and unoriginal, but it was quite the [pullquote align=”right”]

What was your impression of "Fuller House"?

Thank you for voting
Thank you for voting.
Please select an option!
ShowHide
[/pullquote]opposite. Well, it was cheesy, but the good ol’ ‘90s’-cheesy modern day sitcoms lack. It brought the feelings only “Full House” could bring, well that is until now.

The excitement surrounding “Fuller House” was off-putting. More often than not, sequel shows are big letdowns, it almost seems as if nothing can top the original series. “Fuller House”  certainly isn’t better than “Full House,” but it hasn’t been a letdown by any means. It still has the quirky ‘90s humor with a 2016 spin. The house looks essentially the same; warm and clean. The cast has aged, but hasn’t lost the charm “Full House” fans have loved for many years. I tried to keep my hopes to a minimum to protect myself from a world of hurt if the reboot was a let down, but I found myself squealing with pure delight when Uncle Jesse began singing and when Kimmy let herself in through the back door with her signature style. I was especially excited when Steve (Scott Deigner) threw himself at D.J. all these years later.

For longtime “Full House” fans, the reboot will be all you hoped for and more; 13 more episodes of ‘How rude’ and ‘Oh mylanta’ moments. But, for those who have never seen “Full House,” “Fuller House” will be a much needed dose of ‘90s humor that’s been missing from your life; ‘cut-it-out’ and ‘have mercy’ are important phrases that are lacking in your vocabulary and Fuller House can solve that.

What was your impression of “Fuller House?” Leave your comments and questions below.

I was not impressed with the acting and i found myself cringing from the pain I could see in Bob Saget’s eyes. Over all, I just the first episode was enough to satisfy me.