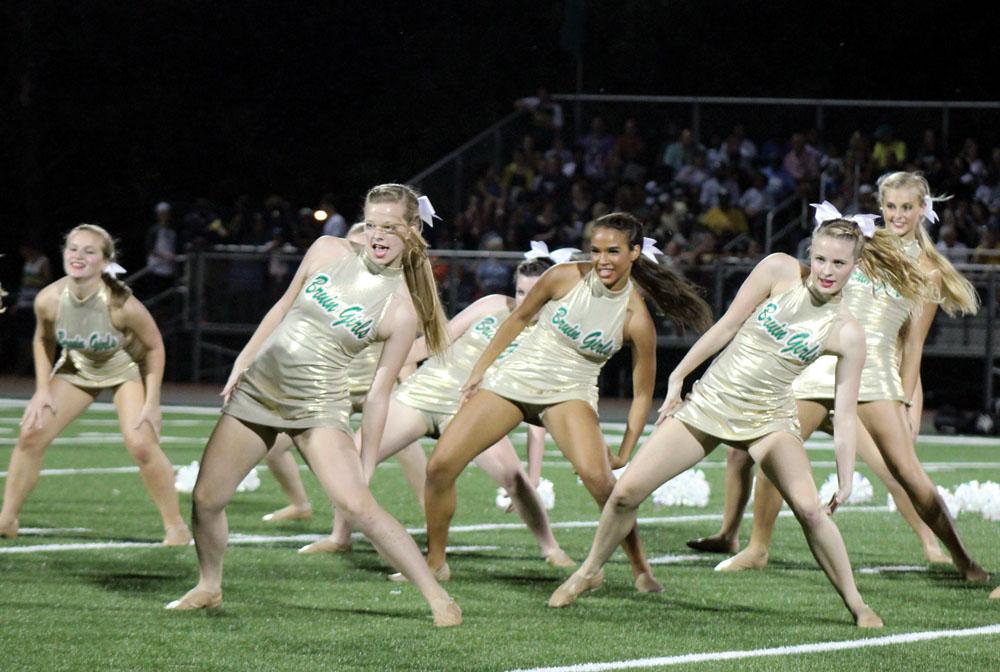 With sunny Orlando as their backdrop, the Bruin Girls competed in the National Dance Alliance National Championship for high schoolers Feb. 26-28 at Hard Rock Live. The girls received ninth for poms, fifth for mix and brought home hardware for a third place finish in jazz.

“We did our best and left our scores in the hands of the judges. No matter how the results turned out, no matter good or bad, it’s an amazing feeling getting to perform with people I love and who have pushed me to try my hardest,” freshman Bruin Girl Anna Kate Sundvold said. “I know we came in wanting first, just like every other team, but I remember before awards the seniors saying, ‘Whatever happens doesn’t matter because we did the best we could and that’s all that matters.’ Honestly, I’m so proud of how much this team has improved and grown closer to each other over the year.”

Sophomore Bruin Girl Gracie Head shares Sundvold’s sentiments, saying that the months of practice and preparation were the fun part, and the competition was just a chance to show off their hard work.

“We have been looking forward to this for the past nine months and have been working for those nine months. Also, we practice breathing together and just trying to get in the right mindset,” Head said. “We really make sure we hear the music the same and know the counts perfectly.”

While the competition wasn’t everything to the girls, they were still excited to see how they would do. Senior Bruin Girl Bria Trent said the week brought the team together.

“Growing closer with all of my team [was my favorite part.] We were already close, but being with them for a week and going through this process has really made our friendships so much stronger,” Trent said. “We had our best performances this weekend.”

She said she had nerves before the momentous performance, but being with her team soothed her butterflies and got her in the right frame of mind to give it her all.

“I was nervous,” Trent said. “We all just talk to each other and encourage each other so that helps to know you have your team behind you.”

But the week wasn’t all focused on the competition. It was also a great week for the girls to bond at Universal Studios and at their performance at Disney World. Trent said freshman Katharine Mehle’s stuffed animal was hidden in the microwave as a practical joke. Head said the girls also learned to love their silly green wigs.

“We had to wear green wigs for our pom dance this year,” Head said. “We all thought it was not the best idea, and then at nationals we finally realized that the green wigs actually were a great fit.”

The weekend of fun was also the senior members’ final chance to perform with their team and revel in their last three years of dancing for RBHS.

“It’s been such a huge part of my life,” Trent said. “I’m not ready for it to be over.”
The underclassmen are also still holding onto their final moments with their senior friends, who were the same girls that showed them what it meant to be a Bruin Girl and helped them begin their high school years.

“I am very sad to see the seniors leave. They have brought love, courage, honesty and nothing but positivity to the team,” Sundvold said. “It’s always hard saying goodbye to people, especially when you get to become so close to them over the years, but I know they will do great things and will touch many other people’s lives just like they have touched mine.”

But it isn’t all bad news. Sundvold is excited to start fresh with new dance routines and a new group of girls with some experience under her belt.

“I’m excited for all the upcoming new team members I will be dancing with,” Sundvold said. “I’m glad that I have gotten to go to nationals with the team we had this year because in the next couple of years I will be more experienced and will know more about what nationals is about.”

Sundvold said she is glad that she is a part of the Bruin Girls and has learned so many valuable lessons from dancing with the team at nationals and at all their other competitions and performances.

“I’ve learned that you need to soak up every moment in life because it all pays off in the end. I’ve learned that teamwork and love can get you through hard moments,” Sundvold said. “One thing I learned at nationals is to step out of my comfort zone and make friends with other teams and people on [my] own team who I haven’t talked to much the past year. I made a ton of friends from other dance teams that I can now keep in touch with over the next couple of years and hopefully go to college with some of them.”

What do you think of the Bruin Girls’ performance in Orlando? Let us know in the comments below.

New Years Resolution Race: The beginning of the end

It is neat to see that the Bruin Girls competed well in Orlando, but were also able to bond as a team. This story brings out the friendship that lies between many of the dancers and also shared the results of the competition making it very enjoyable for readers to read. I liked how this was written after the final performance as it gave a wrap up on the entire season and the Bruin Girls were able to reflect on their season.