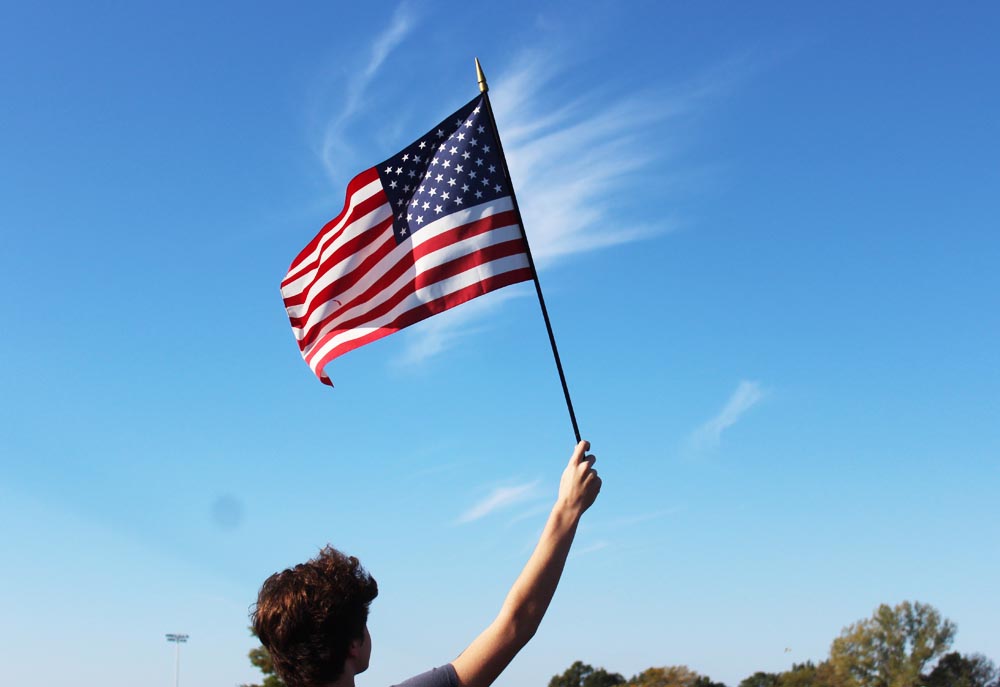 Freshman Ben Yelton proudly waves an American flag outside of RBHS. The stars and stripes represents, among other things, inalienable rights detailed in the Constitution. The Walter Cronkite New Voices Act would expand these rights for students journalists.

As American citizens, we are able to speak, write and believe in what we want. The First Amendment spearheads the iconic Constitution, but some of the powerful rights stated in the document are not always guaranteed.

Different interpretations of the law drastically affects the enforcement of the law. Marvin Overby, American politics professor at the University of Missouri – Columbia, explained the role of the court system in relation to these exceptions

“Freedom of speech and the press has never been considered absolute,” Overby said. “Certain types of expression have usually been held not to enjoy constitutional protection and the federal courts have endorsed all sorts of “time, place, and manner” restrictions.”

One of these exceptions hits particularly close to home. In 1988, the Supreme Court decided in Hazelwood v. Kuhlmeier that a Missouri high school student’s First Amendment rights were not being violated when the school’s principal prohibited the student’s article to be published. Essentially, the decision allowed for schools to censor the work of their students.

The Hazelwood v. Kuhlmeier decision set a powerful precedent throughout the country, and particularly in Missouri. Mo. House Representative, Rep. Elijah Haahr, however, seeks to overturn this precedent through a new bill. The state congressman is sponsoring House Bill 2058, generically known as the Walter Cronkite New Voices Act, which would prohibit school censorship of the bill.

Frank Lomonte, Executive Director of the renowned Student Press Law Center (SPLC), is assisting Haahr in his attempt to pass the bill, and described the impacts, particularly the more freedom granted to student journalists,  that the bill would have on students.

“The New Voices Act gives journalism students and advisers at the high-school and college levels an extra layer of protection on top of whatever protection the federal First Amendment offers them,” Lomonte said. “It limits the grounds on which a school or college could censor a student-run publication to speech that is illegal or dangerous — speech that breaks the law or incites people to break the law.”

The new bill, if signed into law, would overrule the precedent set by the High Court’s decision nearly 30 years ago. Overby, however, said the Court was correct in its decision.

“ I believe the majority in this case ruled correctly given the facts of the case.  First, since the paper in question was designed principally as a pedagogical tool to teach the journalistic craft, school administrators were entitled to manage its content,” Overby explained. “Second, as the majority noted, the school support for the paper was key.  The case was not about whether or not the school had to tolerate the expression of the ideas in the disputed articles . . . . In other words, the Court probably would have protected the rights of the students to talk about these matters . . . but the First Amendment does not require the school to support, print, and publish such material.”

On the other hand, Lomonte said Court was incorrect in its decision, as it bestowed a large amount of power to the school.

“The Hazelwood ruling set an unreasonably low bar for schools to justify censorship. It has given schools the belief that they have absolute control over what students write and can censor for any reason,” Lomonte argued. “If the First Amendment means anything, it must mean that citizens have the right to criticize government services and advocate for changes in government policy. But Hazelwood has led to schools repeatedly censoring exactly that speech — speech commenting on the quality of services that students are receiving. Hazelwood simply lacks balance and invites abuse.”

While Lomonte disagrees with the Hazelwood ruling, he feels encouraged by the new opportunities and precedents that would be created by HB 2508.

“Censorship robs journalism of its educational and civic benefits. A censored news publication is frustrating and disempowering for the students who work on it, and it ill-serves the audience by presenting a distorted picture of the facts,” Lomonte said. “New Voices laws give students back the freedom that the Supreme Court took from them to safely discuss issues of social and political importance without fear. It protects the ability to discuss sensitive or controversial issues without retaliation against the student journalists or their teacher, while still leaving the school or college with the authority to respond in the extreme case that speech threatens to actually cause harm.”

Ultimately, Lomonte stated, the purpose of the Walter Cronkite New Voices Act is to provide students a sense of confidence and comfortability, and allow them to successfully complete their duty as student journalists.

“We have seen in other states that, when students know they have the law on their side, their journalism gets better. They have the courage to tackle important issues without fear, and they take the pride of ownership in knowing that the publication really belongs to them,” Lomonte said. “Ultimately, our hope is to make every student newsroom a more rewarding place to teach and learn … A New Voices law will restore some sensible boundaries so that students can bring their community an honest, insider look at how their schools are performing, which is valuable information that readers can’t get anywhere else.”

Pledge attempts to extinguish the “R-word”