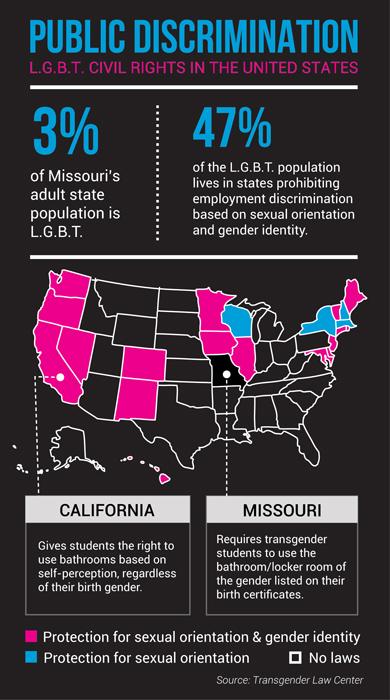 Missouri students may soon see the creation of “bathroom patrol squads” with SB 720, a bill that would demand public schools to enforce gender-specific facilities, requiring transgender students to use the bathroom or locker room of the gender listed on their birth certificates.

Sen. Ed Emery, R-Lamar, the sponsor of the bill, said he began developing the bill after receiving communication from a constituent regarding the issue of transgender students using school facilities.

“[The constituent] suggested that the state take the lead on this issue to give direction to local school boards on how to address a situation where a student demands to use a restroom facility of the biological sex different from their own,” Emery said. “When she reached out, I began to look into what other states were proposing on this issue and crafted legislation that is modest in nature and does not create an unfunded mandate for local districts.”

The bill’s current language allows schools to provide accommodations for transgender students, such as giving them access to unisex, faculty or single-sex bathrooms and locker rooms, provided that the student has written permission from a legal guardian.

Given that Columbia Public Schools’ non-discrimination policy covers gender identity and expression, the bill’s hypothetical passage could introduce some complicated legal questions. Assistant Principal Lisa Nieuwenhuizen said that though she will not speculate on the consequences of the bill, she does not believe that it will come to fruition.

“I don’t think the bill will hold up in a court of law,” Nieuwenhuizen said. “There have been cases — I know California had a case a year and a half ago and basically the students were allowed to use the bathroom with which they identified.”

For junior Ian Koopman, who is transgender, that compromise pales in comparison to what he sees as clear discriminatory legislation.

“It’s not about making people feel more secure,” Koopman said. “It’s really about trying to pigeonhole transgender people because of their identity and because of the way they feel about themselves or their bodies.”

One of the main concerns that spurred the creation of this bill, Emery said, was the risk involved with allowing students of opposite biological sexes to be together in a facility where they might not be fully clothed, such as a locker room. Koopman, however, does not see the reasoning behind that argument.

“I don’t really understand where this bill is coming from, but the only thing I can really pin it down to is a kind of mass hysteria over transgender people,” Koopman said. “I realize this might be under the guise of, transgender people would be more likely to somehow assault some other cisgendered person, however, I also know that recently there was a study done on how often that actually happens and there have been no reported cases of transgender people assaulting others in a bathroom.”

In terms of bathroom violence, Koopman is correct. A 2015 article in the Advocate, a LGBT-interest magazine, stated that there have been no verifiable reports of a trans person harassing a cisgender person, or of an individual pretending to be transgender to access certain restrooms. Nevertheless, Emery said that there is still some danger in allowing a transgender student to use their preferred bathroom or locker room, and that his bill both resolves that problem and eases discomfort other students may feel.

“There is a risk with having students from opposite biological sexes using the same facilities where students are in a state of undress,” Emery said. “Students should also have a right to their privacy and not be exposed to students of the opposite physical sex.”

Despite Emery’s faith in the bill, SB 720 may certainly have a tough road ahead. In November, an Illinois school district was found to have violated Title IX, a federal law that bans sex discrimination, by requiring a trans student to use a private changing and showering facility. Still, Emery is not concerned with the possibility of similar attacks on his bill.

“Despite attempts by the Obama administration to unilaterally indict transgender concerns as discriminatory, several court opinions have been handed down that have dismissed such Title IX claims,” Emery said. “A policy based on clear scientific facts that have been accepted since the beginning of time is not discriminatory. Restricting students from access to certain facilities that are designated for the opposite physical sex is appropriate both scientifically and rationally.”

Though Koopman himself does not use male bathrooms at RBHS–citing concerns of how other students would react–he strongly supports the option remaining available for other transgender students.

“I really feel like this bill is an attack on teenagers’ bodies and it’s not allowing teenagers to feel safe about their bodies when there are already so many changes going on around us and within us,” Koopman said. “If we don’t have a place to feel safe at school…I don’t know where we’d end up.”

Path to professional sports is one bumpy ride