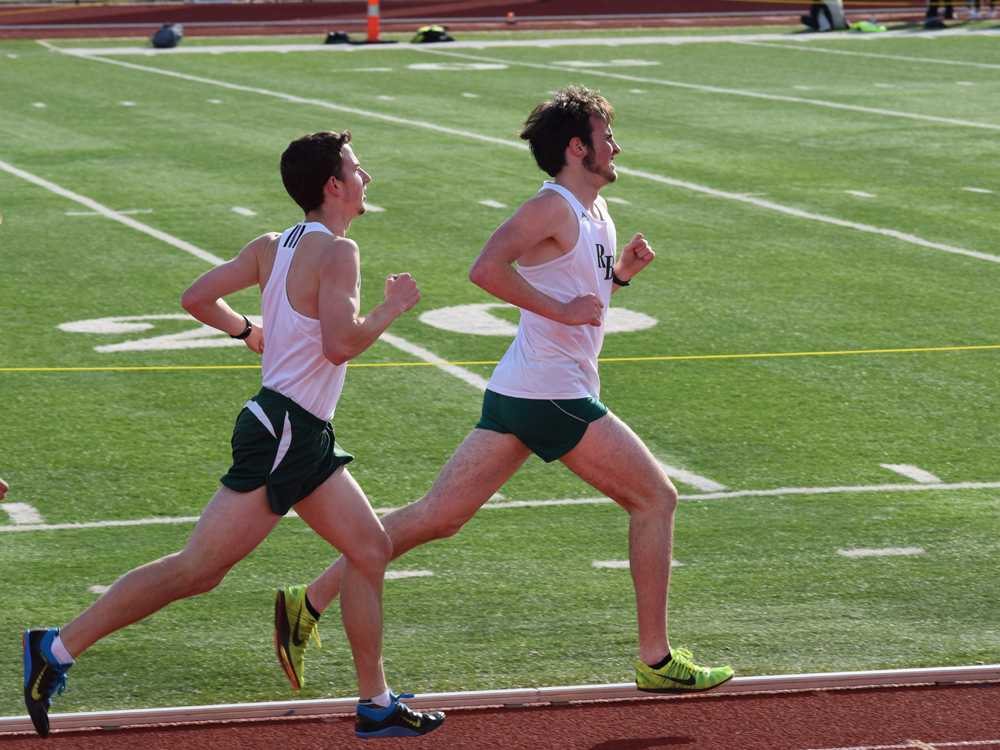 The RBHS varsity track and field team brought home two first place finishes from the Kearney Invitational this Saturday, April 9. Both the boys’ and girls’ teams took first place with the girls’ finishing with 102 points, 31 points ahead of the second place Park Hill South. The boys finish was closer, so close that going into the final event they were in second place before they pulled through and matched their female counterparts success.

For field events, long jump and pole vault were dominated by the Bruins. Both the male and female long jump events ended with a RBHS athlete in first place as senior Collin Crane and junior Ojurere Shonekan took home gold medals. Shonekan, the 2015 state champion in long jump, scored a season best, despite an injury. Junior Zach Doster took home fifth overall in pole vault, and on the female side junior Jordan Banker and senior Lexi Heim scored second and third place, respectively.

“Jordan Banker tied the school record in the pole vault at 11’6, took 2nd overall,” Coach Patrick Sasser said, “[It was a] very nice meet for her. She took some attempts at 12’1 which would have been the highest she ever jumped.”

Out on the track, the runners achievement paralleled that of the field competitors. The running events were stacked with fierce competition. Despite these and a few natural roadblocks, the Bruins still came out on top.

“A lot of people did really well, it was tough because the wind was pushing against us when we ran, but I was happy to find out a lot of people on the team still got their personal best times.” Freshman Cameron Thompson said, “It was really cool to see everyone working together to help the team as a whole.”

Thompson finished fifth in the 100 meters and second overall in the 200 meter distance. Shonekan went beyond her long jump prowess and took home second place in the 400 meter race. Her older sister, senior Faramola Shonekan picked up a gold for the 800 meter race. The Bruins gave a good showing in the 1600 meter race for both the boys and girls. Junior Sam Baumer finished fourth and in the women’s race senior Emily Harl finished third with her teammate Rebecca Rubenstein just ahead of her in second place. The Bruins’ junior class dominated the longest distance, the 3200 meter as juniors Adam Stanstedt and Nick Wright came in fifth and sixth. Against the odds, junior Aliyah Blackburn pulled through to sixth place.

“In a loaded field Aliyah ran 12:12 in the 3200, very impressive. [It was the] fastest she has run outside of eastern relays.” Sasser said. “She battled some ferritin issues in Cross and over winter and is finally back to running like herself again.”

The Bruins’ hurdlers also shone with senior Chaaz Ferguson-Cooper winning both the 110 meter and 300 meter hurdles. Sophomore Caroline Stevens also won the 300 meter hurdles. Stevens added another good showing in her fourth place finish in the 100 meter hurdles, with her teammate junior Stevia Holmes coming home ahead of her in third place.

The team also boasted four gold or silver relay finishes, and while Sasser commends some of the relay performances, such as that of sophomore Reece Jarvis, he believes that the relays need improvement, particularly the exchanges.

We need to be a little more focused when it comes to relays, our girls 4×100 had a botched handoff and didn’t make the baton around so we were D’Qed.” Sasser said. “Same thing happened with our guys 4×200 so we lost some big points there by not getting the baton around.”

Even with these critiques, Sasser is holistically very happy with both teams’ displays at Kearney. Thompson was also thrilled by the teams’ showing despite the injuries, weather and disqualifications they faced. For Thompson the meet served as a confidence booster for her and her fellow athletes.

“It means a lot knowing we could get everyone together and get it done.” Thompson said. “It’s empowering knowing that since we did so well at this meet, we can keep working to do through the rest of the season too.”

What do you think of the track teams’ performance? Leave  a comment below.

‘The Mermaid’ takes comedy to a new level

I liked how this story gave a recap on the meet and it was interesting to read while also gain knowledge on the results. It showed a domination of Bruin track runners despite the tough competition as well as some disqualifications. I also enjoyed the variety of sources from both athletes and coaches. Being a couple months into the track season, it is interesting to see how they will improve throughout the rest of the season.