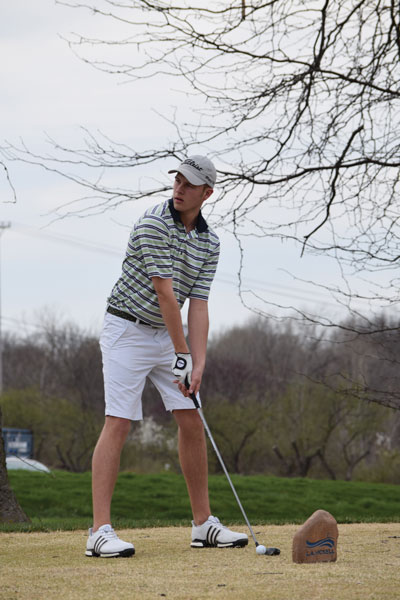 Junior Ben Knoesel lines up a tee shot during practice as he prepares for his teams's trip back to sectionals and a trip to state.

The boy’s golf team placed second in sectionals Monday and will compete at state next week on May 16.

Losing by only six strokes to Glendale High School in districts, the team aimed to perform better in sectionals, which they won last year. A week later, the team evened out with a combined score of 315. Only seven strokes higher than they performed in districts, the team found a way to squeak into the top two teams and earn themselves a ticket to state.

For both districts and sectionals, the team was seeded at number one and expected to take home the gold. In a Cinderella fashion, however, Glendale High School pushed ahead and took the titles. The dispiriting finish did not startle head coach Doug Daniels; rather, he sees it as a good stepping stone back to the state tournament.

“Even though we are disappointed by a second place finish, we are excited to be moving on to the next round,” Daniels said. “Things are all even again.”

And so they are.

In districts, senior Stephen Sowers, sophomore Hudson Dubinski and freshman Ross Steelman all placed in the top eight with scores below 80. Sophomore Sam Rentschler and junior Ben Knoesel were not far behind, helping round out the varsity squad. As for sectionals, the team carried their heads high and fought like true Bruins, as Sowers, Dubinski and Steelman were below 80 again. Rentschler and Knoesel were even closer to breaking.

After winning state last year by 18 shots, the team is working to go back and win again.
Coming off an 8-1 winning season and training at golf course L.A. Nickels every day after school, the boys had their eyes set on the prize all year. Steelman, who finished last week’s tournament as district champion, is filled with excitement for state and has a plan to keep climbing.

“I won individually, played pretty well [and didn’t make] any totally stupid mistakes,” Steelman said. “[We] didn’t do so well as we wanted as a team, but we made it to the next round.”

Looking Toward the Future