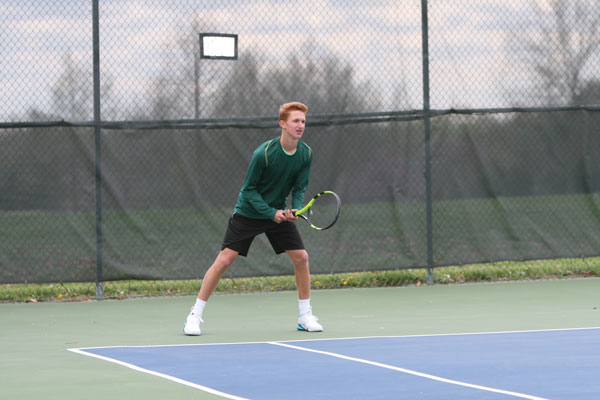 Freshman Zach Grueber focuses on the ball in practice in preparation for districts. Grueber is one of the four freshmen on varsity representing the Bruins’ Boys tennis team this season.

When it comes to playing in important sporting events, nerves run high and adrenaline courses through the athlete’s body.  Regular season games typically aren’t as high-stakes. Nerves aren’t as prevalent, and the excitement and anticipation for the game isn’t as high.

“District matches are more about finding your game and improving it for the offseason,” freshman boys tennis player Zach Grueber said. “You need to prepare so you can compete as well as possible.”

This attitude has taken the team a long way. With the team winning districts from years 1999-2015, it has a dynasty to uphold.

This week marks the beginning of the team’s post-season games. Even though they have been successful in post-season games in the past, they have to live in the moment, and find the perfect balance between being too cocky, yet positive in their play.

“There is a fine line between being confident and arrogant,” Coach Ben Loeb said.  “Our sport is more individualistic, like golf and wrestling, so it really depends on the individual. I try to get them to focus on maximizing what they are capable of doing.  If you are a comparer you can fall into the arrogant trap more easily. If you are a maximizer you are a striver.”

With the goal being to finish first in state, the Bruins have to amp-up their practice regiment and put their eyes on the prize when it comes to this time in the season.

“The differences between regular season and post-season games would be to at some point modify how much training we might do as we get closer to big dual meets,” said Loeb. “We do not want to have hard, long practices right before a big meet and we may spend some time preparing for certain match-ups if we know the particular opponent.”

The changes made in those practices are small, yet can make a big difference in how the team performs.

“We realize that districts and state are big tournaments,” said freshman varsity tennis player Jake Fraunfelder said. “Our practices are more intense, and we are working on certain skills to further better our tennis game,”

The Bruin’s have had a tremendous season, starting off the year with playing four games at the Deco Turf National Tournament against some of the hardest teams in the nation, and only losing once.

There’s no doubt that the Bruins have one powerful team. Four out of the six varsity players are freshman.

“We have a young group,” Loeb said. “Some of them live in the moment, and others prepare for the upcoming moment. If the opponent is a real challenge, then the attitude will probably reflect a more refined focus.”

Having a mainly freshman team has its challenges and upsides. There’s inexperience in the players who haven’t played in these high-stakes tournaments, but the potential of having a young varsity team is promising for the organization’s future.

The regular season has treated the team well, with a winning record of —-, now the challenge is going to be transferring all of that good play into the post-season. The mentality of the new and returning players has to gel together to make sure they clench the state win.

“Our mentality going into state is to work our hardest and give our best in every match we play,” Grueber said. “We have high standards for state and we do expect to win, but we still accept that it won’t be easy and that we will have to work hard to win.”