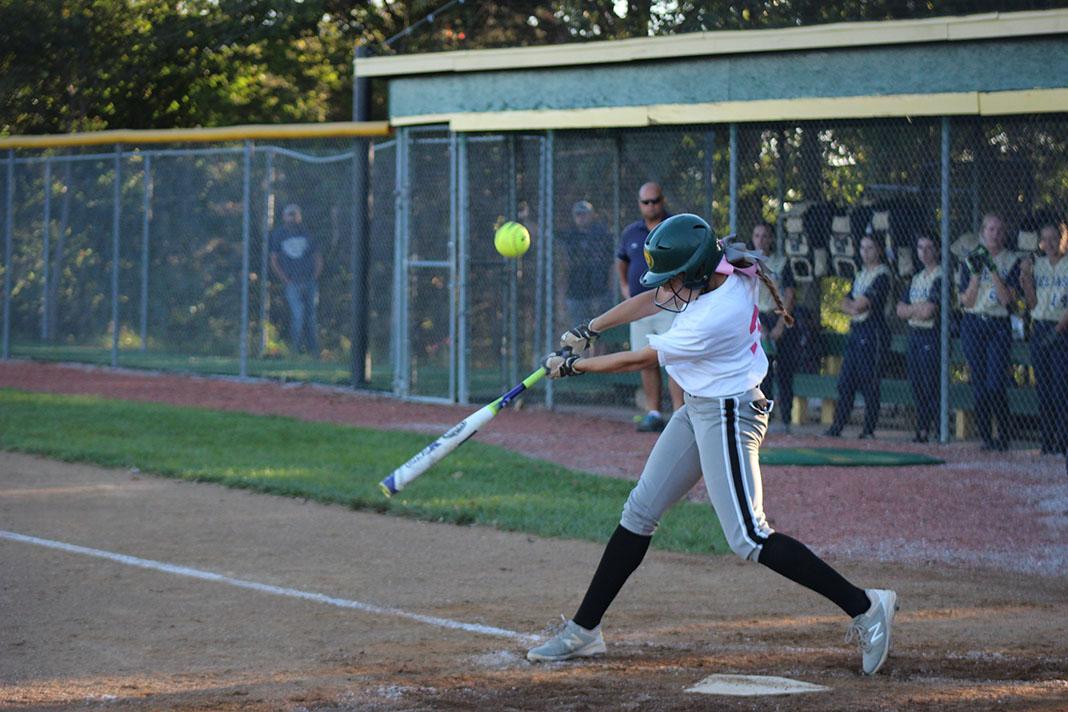 Sophomore second baseman Hannah Pate hits a foul ball across the third base line as she battles through a long at-bat. Photo by Cassidy Viox

Carrying the season’s momentum from the first pitch to the final play, the softball team ended their final home game of the season with an 11-6 victory over the Helias High School Crusaders. The Bruins improved their winning record at their annual “Pink Out” game to 17-5 as they fund-raised for breast cancer research.

The team felt the usual nervousness before the game, but quickly regained assurance that they could overcome any doubts.

“Our coach pulled us aside and told us that it was just another game,” sophomore right fielder Maddie Murphy said. “We were well-prepared for this game and we had complete confidence in our offense and consistency in our defense.”

Key hits and solid plays allowed the team to gain a 4-0 advantage after only one inning. Junior third baseman Alexis Burks crushed a three-run home run over the left field fence.

Several Lady Bruins stood out in the field, as well. Second baseman and sophomore Hannah Pate stabbed a hard line drive for an out early in the game and Murphy also had impressive catches that kept the Crusaders’ score low.

“Everyone on the team made some game-changing plays tonight,” Murphy said. “We pulled together and played as a team which led us to another win.”

One play that demonstrated the Bruins’ intensity was aggressive base running by junior left fielder Bailey Devlin and senior center fielder Delaney McDannold. Their combined hustle resulted in Devlin reaching third base after a bunt with McDannold scoring a run from second on the play.

“[This]  game showed one of our best team wins so far this season,” Devlin said. “Though we were already winning at the time [of the bunt], it gave our team what we needed to finish the game strong.”

After the game, seniors Ellen Terry and McDannold received honors at the last home game of their high school softball careers. Mizzou-bound McDannold finished the night scoring a total of three runs and creating solid plays in the centerfield. Terry’s senior night ended abruptly after injuring her ankle in a hard slide to second base. She was safe.

“The girls are working a lot at practice [by] fine-tuning little mistakes and improving their mental games,” assistant coach Brianne Graves said. “We are a very solid team which leaves more time to work on the little things that are holding us back from the next level.”

Students should never have phones in class